’90s Foods We Were All Completely Obsessed With As Kids 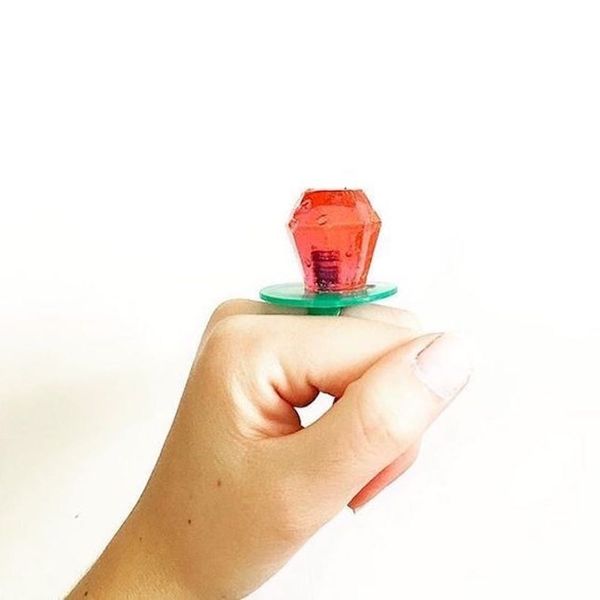 The ’90s were a truly wonderful decade, so it’s no surprise that millennial nostalgia keeps turning back the clock. We’re total suckers for ’90s music. And, of course, we continually bring our favorite childhood fashions back to life through ’90s Halloween costumes and DIY projects. But no aspect of the ’90s *really* brings us back to our childhoods quite like our favorite snack foods. Grab your lunch boxes, because we’re taking a journey back to 1995 though these 13 iconic ’90s foods.

1. Push Pops: Remember these sweet, fruity, sugary hard candies that never seemed to end? They were perfect for sucking on during class and/or summer camp. What was your favorite flavor?

2. Ring Pops: Speaking of amazing hard candies, ring pops were the favorites of little girls everywhere. They made you feel kind of like a grown-up but they were completely childlike at the same time.

Canadian Walmart is taking me back to my childhood. Haven't had this stuff in AGES. #Canada #Walmart #fruitopia #childhood #memories

3. Fruitopia: Who DIDN’T have a Fruitopia machine in their school cafeteria? This sugary fruit juice was AMAZING for sipping on right after recess. We can still taste the flavors of Strawberry Passion Awareness, Fruit Integration, Citrus Consciousness, The Grape Beyond and Tangerine Wavelength.

4. String Thing: Remember string things? We sure do! Looking back on these fruity strings of flavor, they admittedly seem kinda questionable — but we devoured them en masse during the ’90s.

5. Trix: “Silly rabbit, Trix are for kids!” And for adults who grew up in the ’90s and are still obsessed with fruity cereals, of course! As if Trix cereal wasn’t amazing enough, it also came in yogurt form, among other things.

6. Lunchables: Whether you splurged on the pizza pack or stuck with the basic cracker sandwiches, Lunchables were likely one of your favorite packed lunches. When you think about it, these were totally genius: Add crackers and tiny lunch meats to a box, throw in some sauce to make it taste pizza-like, and have kids take it to school for lunch. Win-win!

A post shared by Josahfat Santibañez Jimenez (@yoszraconteurs) on Aug 4, 2016 at 4:19pm PDT

8. Doritos 3D: As if Doritos weren’t perfect enough all on their own, in the ’90s, we were introduced to 3D Doritos… That is, triangle-shaped Doritos with TWO sides. These gave you even more flavor and crunch than regular Doritos, which at the time was simply ah-maze.

9. Bubble Jug: Looking back on it, what the heck WAS this stuff? Bubble Jugs came packed with a weird, powdery substance that somehow miraculously formed into bubble gum upon entering your mouth. This seems sketch now that we’re adults, but let’s be real: The makers of Bubble Jug get points for convenience, adorable packaging and ingenuity.

10. French Toast Crunch: Do you remember this stuff?! This was probably THE BEST cereal to come out of the ’90s. Every Millennial remembers munching on a bowl of this before going to school in the mornings. It had the sweet, syrupy taste of French Toast with all the crunch of cold cereal.

11. Squeezits: Why don’t we see these around anymore? Actually, that may be a good thing… Squeezits were completely addicting back in the day, and also super fun to drink out of.

12. OUCH! Bubblegum: In another installment of adorable gum ideas to come out of the ’90s, these Band-Aid strips were genius. They were portable, cute and sweet — like so many iconic ’90s snacks.

My girls have been wanting Cosmic Brownies for their school lunches, so I whipped these up yesterday. I don't know who was more excited- my daughters or my husband 🍫 #cosmicbrownies #brownies #wilton @wiltoncakes #chocolate #ganache #honemade #baking #baketheworldabetterplace #dessert #kids #childhood

13. Cosmic Brownies: Yep, we’ve saved the best for last. Cosmic Brownies were THE BEST dessert ever. Made with chocolate and rainbow sprinkles, they really were a lot like homemade brownies, but with a pre-packaged twist that only the ’90s could inspire.

Take a journey back to the ’90s with us by following us on Pinterest!

Maggie McCracken
Maggie McCracken is a freelance writer, blogger and aspiring digital nomad. She writes primarily about food, travel, yoga and healthy living, and she has a background in health and science journalism. You can read more of her work on her lifestyle and travel blog, The Olive Branch.
90s
Recipes
90s
The Conversation