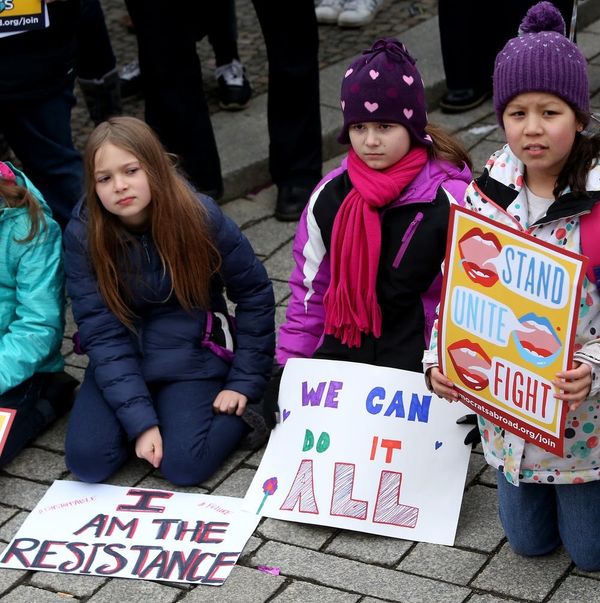 The bill, introduced on the 70th anniversary of the signing of the Universal Declaration of Human Rights, comes after the Trump State Department last year removed findings about reproductive rights from its annual report on global human rights. In introducing this bill, Congress members Barbara Lee, Katherine Clark, Nita Lowey, Lois Frankel, and Eliot Engel aim to make it clear that reproductive rights are human rights and, as such, should be included in all state reports concerning human rights.

Since 2011, annual State Department reports have included detailed findings about abortion and birth control access in countries around the world, as well as the dangerous health outcomes for women, girls, and all people in regions with regressive reproductive rights policies. The absence of this crucial information isn’t merely a political statement — it’s dangerous.

Access to safe and legal reproductive care not only saves the lives of women and children, especially in developing countries, but also empowers women and girls to have opportunities equal to those of their male counterparts. Explicitly defining reproductive rights as human rights through inclusion in an annual report on human rights is vital to de-stigmatizing health care services that women and girls around the world rely on to be autonomous, safe, and healthy.

But the exclusion of crucial global information about reproductive health care access and outcomes is dangerous on more than a cultural level. Reducing human lives to politics yields terrifying consequences.

Around the world, reported numbers on maternal death rates in countries that prohibit access to abortion care, contraception, and sexual health education have the power to guide our understandings of the consequences of reproductive rights policy, and the critical nature of foreign aid supporting reproductive rights. Without this information, we’re left in the dark on a gendered humanitarian crisis that we should be taking action on.

“When women’s rights are limited and they are unable to access basic health care like contraception, safe abortion, and maternal health care, their ability to achieve economic, social, and political empowerment is fundamentally hindered. By requiring annual reporting on these critical issues, the House of Representatives is ensuring that the rights of women and girls will no longer be political spoils that can be erased from global discourse,” Center for Reproductive Rights President Nancy Northrup said in a statement about the Reproductive Rights Are Human Rights Act.

NARAL Pro-Choice America President Ilyse Hogue has similarly weighed in on the importance of the bill. “The Trump administration will stop at nothing to systematically dismantle and deny the fundamental freedoms of women in the U.S. and abroad, and this bill is an important step in fighting back against their attempts to deny that reproductive rights are a human right,” Hogue said in a statement.

Within days of starting his presidential term, President Trump reinstated the global gag rule, a Reagan-era executive order prohibiting federal funding of organizations offering reproductive health care such as abortion and contraception abroad, despite how many developing countries rely on this funding for the survival of key, vulnerable populations.

Developing countries have already reported detrimental outcomes as a result of the global gag rule, such as increased rates of unsafe abortions, maternal deaths, and spread of sexually transmitted infections and diseases. Research has repeatedly shown that in developing countries, lack of access to contraception and sexual health education increases the likelihood of girls entering child marriage, and makes them less likely to lead economically independent lives.

According to a Guttmacher Institute report from earlier this year, countries with heavily restricted access to abortion have roughly the same abortion rates as countries with relatively liberalized access; the only difference is that restrictive countries have substantially higher rates of unsafe abortion. On the other hand, in the United States, a report from earlier this month showed that increased access to affordable, reliable birth control in recent years was a key factor in the nation’s historically low national abortion rate. In other words, while anti-choice policies will sometimes force women to give birth, for the most part, throughout history, restrictions on abortion access have been unsuccessful in stopping abortions, often merely inconveniencing or endangering women and children’s lives.

By omitting reproductive rights outcomes in the State Department’s annual human rights report, we allow the Trump administration to hide the impact of its global gag rule policy, which experts have already demonstrated has the potential to ruin and even end lives abroad. However, the dangerous consequences of anti-choice policy exist not just on the global level, but also in the United States.

On the domestic front, anti-choice policies enacted by a wave of conservative state legislative wins across the country in recent years have led to rising maternal death rates in the US, and a higher maternal death rate than any other industrialized country.

According to the most recent data, as of 2015, there are 26.4 maternal deaths for every 100,000 live births among American women; this number rises to 44 deaths for Black women, and also increases in states with greater restrictions on abortion, such as Texas and South Carolina. More than a third of all 1,200 restrictions on abortion enacted since Roe v. Wade (1973) were passed between 2010 and 2017.

Given recent circumstances, the Reproductive Rights Are Human Rights Act is all the more important. The United States has long stood as a global leader on reproductive rights, and we can’t allow toxic, partisan politics to change this.