‘Dietland’ Is Unlike Any Show You’ve Seen Before 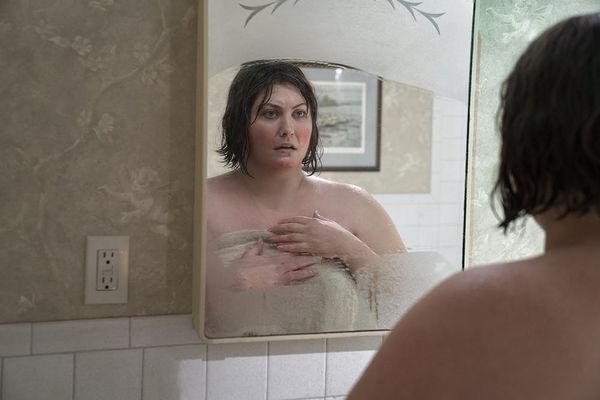 AMC’s new show Dietland is based on Sarai Walker’s 2015 novel of the same name. And yet, turning the book into a TV show feels more timely than ever in summer 2018. Created by Marti Noxon, Dietland tackles body positivity as well as toxic masculinity and the impulse toward vigilante justice.

If that sounds like a lot to take in, well, it is. The hero of the show, Plum Kettle, played by Joy Nash, is a ghostwriter for a magazine editor’s advice column at a women’s title, Daisy Chain. But don’t expect any Devil Wears Prada vibes here — Plum’s job is just the tip of the iceberg for the show’s plot.

A show about a plus-size writer learning to love her body while working in the fashion industry would be inspirational in its own right. But it’s just one of many story lines Dietland weaves together. In the premiere episodes, Plum meets an interesting duo who work the beauty closet of Daisy Chain’s publisher. One of them, Leeta, encourages her to meet a body-positive thought leader, Verena, whose mother’s diet regimen Plum followed in the past. There’s definitely a lot more than lipstick recommendations going on in this beauty closet — think corporate hacking — but that’s still not the weirdest plot point in the show.

The overarching mystery of Dietland, at least in the first three episodes, isn’t with Plum’s publisher at all. Instead, there are spliced-in scenes showing dead men’s bodies being dropped out of windows and uncovered at morgues. This is the work of a rogue network known as Jennifer, a group that apparently seeks to punish men guilty of sexual misconduct by death. In the show’s third episode, it’s revealed that Jennifer has killed 12 men, after making them read statements about their alleged misconduct and why they “deserve to die.”

Of course, Dietland is hardly condoning violence and revenge. A trailer for future episodes shows others being concerned that Plum appears to feel sympathy for Jennifer’s cause. Still, the show comes at a time when many viewers might feel tinges of understanding for the Jennifer activists — their motives, if not their actions. In the wake of the #MeToo movement and revelations of widespread sexual harassment, it’s not hard to imagine why radical activists would go to such lengths. In fact, in an interview with The Wrap, Noxon called the show’s revenge premise “the next extension of the Me Too movement.”

And when the Jennifer-inspired scenes come in between conversations about sexism, like women being judged for their age, or husbands not wanting their wives to work, it’s easy to conceive of more than one of the main characters being involved with Jennifer. When Plum’s magazine boss, Kitty (played by Julianna Margulies), talks about sexism, it seems possible that even she could be involved with the vigilante group (a move that would go against the company that employs her, which has provided legal defense money to at least one person accused of rape). “Jennifer won’t stop until they free women from oppression. And that will never happen. Men would rather destroy the world than have us rule it,” Kitty says in the third episode. At its face, her statement is a criticism of Jennifer, but it’s also a critique of the conditions that led the activist group to embark on this mission in the first place.

Obviously, there’s a world of difference between Plum learning her worth and vigilante killings in the name of revenge. Still, the show looks like it will be way more thought-provoking than standard summer fare. And it’s a good reminder for women to stand up for themselves, whether that’s in the workplace or in their personal relationships.

Are you watching Dietland? Let us know @BritandCo!