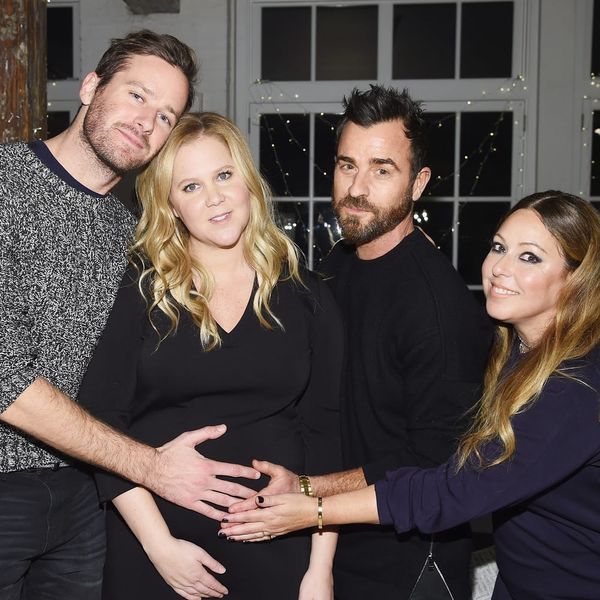 Last month, comedian Amy Schumer canceled her comedy tour due to complications with hyperemesis gravidarum. The 37-year-old actress, who announced her pregnancy in October, has been public about her struggle with HG, a condition characterized by severe nausea and vomiting during pregnancy (which Kate Middleton has also experienced in her pregnancies).

While around 50 percent of women experience some morning sickness during pregnancy, HG, which is much more severe and risky, affects an estimated .5 percent to two percent of pregnant mothers. Severe, daily vomiting can cause dehydration and weight loss, which can also lead to psychological complications like depression, anxiety, and even PTSD. Some women, like Schumer, are unable to work because they’re so ill, adding emotional and financial stress.

The medical community is unclear on the cause of HG, but one theory relates to an excess of the pregnancy hormone, HCG. “There are risk factors for hyperemesis, such as a woman has abnormal amounts of placenta, including twin pregnancies,” Dr. Patrick Ramsey, MD, a maternal/fetal medicine specialist at University Health System in San Antonio, tells Brit + Co. “We also see some patients who have HG with higher levels of HCG compared to women who don’t.”

Typically, Dr. Ramsey says, HG resolves after the first trimester. In these cases, providers aim to keep mothers hydrated and healthy, and babies typically don’t suffer harm. “Usually, it’s a self-limited condition that resolves as the first trimester ends, so as long as we can keep mom well-hydrated and her nutritional status stable, we can get them through that window,” he says. “The biggest risks in these cases are malnutrition, dehydration, or electrolyte abnormalities.”

For some women, though, excessive nausea and vomiting continue through the entire pregnancy, increasing a mother’s risk of health issues like kidney failure. And in severe cases, it can harm the baby.

Kimber MacGibbon, RN, co-founder of the Hyperemesis Education and Research Foundation (HER), tells us that severe HG may be linked to negative outcomes for babies. A 2014 study found that fetuses exposed to HG in utero showed a 3.28-fold increase in neuro-developmental disorders like ADD/ADHD, learning delays, or sensory processing disorders.

As with any chronic illness, there’s also a significant risk for psychological issues with hyperemesis. “Being chronically ill will have mental and psychological effects on people’s ability to cope,” Dr. Calla Holmgren, MD, Assistant Professor of Obstetrics and Gynecology at the University of Utah Health Sciences Center, tells us. “Study after study has shown that people who have HG have significant problems living their normal lives, like going to work or even going outside.”

To prevent psychological impact on moms, Holmgren says it’s crucial for providers to take HG more seriously, treating it aggressively immediately following diagnosis. “If hyperemesis is not treated right away, it can spiral out of control. Many women have nausea and vomiting during pregnancy, so people see it as normal — but HG is not ‘normal,’ and it needs to be treated with a very protocol-based approach.”

Some women respond well to anti-nausea medications, but in more severe and prolonged cases, mothers with HG require hospitalization for intravenous fluids, and others need pumps of medication or even at-home care to treat their excessive vomiting.

In any of these cases, Holmgren says, support and understanding are imperative — especially in the workplace. There’s a common assumption that flexibility with pregnant women and new moms will negatively affect their work performance. But Dr. Holmgren says without aggressive treatment for HG early on, the opposite is true.

“Studies show that women who have severe nausea and vomiting are often under-treated before they get admitted to the hospital,” she says. “Treatment is a huge part of keeping people in the workplace. If you don’t give women time off to treat their HG, they will eventually stop coming to work because they can’t.”

In general, Holmgren says empathy and support throughout the duration of the pregnancy can prevent both physical and psychological complications associated with HG. “Women with HG and severe nausea and vomiting need flexibility and support from their care providers, families, and employers so they can treat it and avoid the psycho-social difficulties that can come with severe disability,” she says.

RELATED: Why ‘PMAD’ Is Replacing ‘Postpartum Depression’ as the Catch-All for Maternal Mental Health