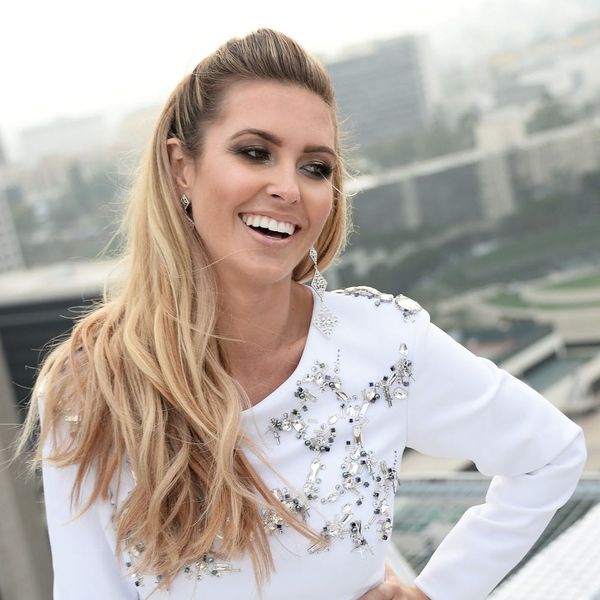 OMG! This is hilarious and brutal. Audrina Patridge may have just had the tropical wedding of her dreams while getting hitched to new hubby (and daddy to her baby girl) Corey Bohan, but it turns out the ceremony DIDN’T go off without a hitch. In fact, Audrina suffered a major wardrobe malfunction that could totally happen to any bride.

Audrina explained the entire sitch on her blog, first describing the dreamy scenario, saying, “I wanted my wedding to be magical with a hint of romance and Boho glam…”

But then she reveals the MAJOR wardrobe malfunction that literally almost stopped her from walking down the aisle, partially because of that hint of romance and boho glam. Specifically: her romantic, boho train and veil.

“I was lucky enough to have my hero (AKA my dad) walk me down the aisle. I love him so much! I was fighting back tears as we made our way closer to Corey,” Audrina tells fans, then adds, “but as this was happening I could feel my train and veil catching on the wooden poles that lined the aisle, causing it to pull my head back.” OMG, no!

Though she could have frozen and refused to walk down the aisle until everything was perfect (or, ya know, BEEN STUCK), instead the bride wanted to “roll with the punches” and kept walking. “I kept moving forward with a smile on my face until it came off!!! I continued walking until some very generous friends ran up behind me to secure it back on my head. LOL.”

It’s a good thing she can have a sense of humor about the malfunction. And surely her ability to roll with the sitch and see the bright side is a good sign for Audrina and Corey’s marriage.

Have you ever seen something go majorly wrong at a wedding? Tweet us @BritandCo!