They’ve Got the Beat: The 10 Best American Cities for Live Music 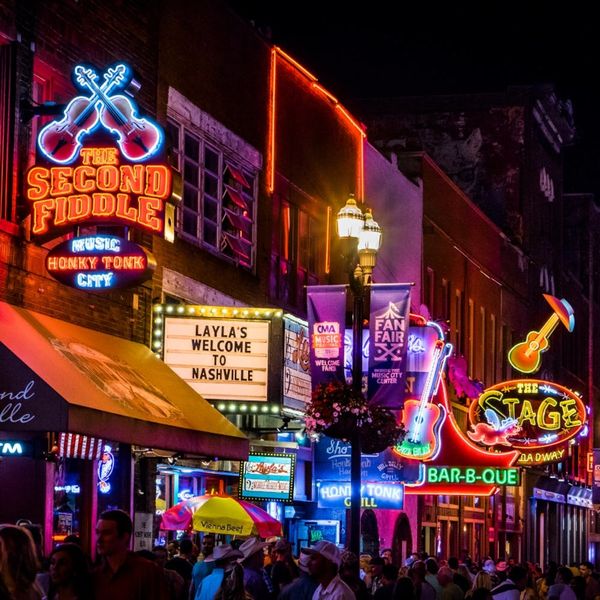 Forget America the beautiful (we’ve covered that already); what about America the musical? (Warning: If you don’t appreciate that slant rhyme, this may not be the story for you.) For the rest of you would-be lyricists and live-music enthusiasts, we’ve rounded up the cities with the most exciting bands and musicians performing daily, from sea to shining sea. Whether you want to rock and roll all night in downtown New York City or fight the Nashville blues in the capital of Tennessee, here are the best places in the country to experience live music. From the hallowed arenas in Las Vegas to the city sidewalks of Chicago, these cities all have one thing in common: They’ve got the beat.

1. Nashville, TN: Nashville is Music City for a reason: When it comes to live music, there’s simply no contest. Trust us, even the guitarists strumming Tom Petty in the arrivals gate of BNA Airport are spectacular. Downtown Nashville is the place to visit such iconic honky-tonks as Robert’s Western World, Tin Roof, and Tootsies. There’s something for everybody playing in the bars along Broadway, from country favorites to hip hop classics, piano ballads to retro R&B. Holston House is the perfect place for a music-lover to stay: The newly opened boutique hotel is only a couple of blocks from Broadway’s honky-tonks and the famed dives of Printer’s Alley. Order a Southern breakfast at TENN (the hotel’s signature restaurant is also open to non-guests) and feast on shrimp and grits beneath a soulful photograph of a young Johnny Cash before catching the latest up-and-coming acts at the Bluebird Café.

2. Las Vegas, NV: Sheryl Crow may sing about “Leaving Las Vegas,” but, lucky for us, other pop divas are always lining up to take her place. Vegas is the best spot to hear your high school heroes perform live, from Britney Spears to Celine Dion. But this oasis in the Nevada desert isn’t just for emotional power ballads and ’90s break-up anthems: Visit in the fall to attend the second-annual JBL Fest, a three-day party at the SLS Hotel kicking off October 17. Ellie Goulding will be headlining, and, as she says, “anything can happen” — especially in Sin City. We all know that what happens in Vegas ends up on your Instagram story, so why not make it one to remember?

3.Memphis, TN: Here’s another Tennessee city famous for its homegrown musical talents, most notably The King. While Elvis famously graced Nashville with his swiveling hips and dazzled Las Vegas in equally bedazzled jumpsuits, he also couldn’t help falling in love with Memphis. If you’re looking for country roads to take you home, you’d be hard-pressed to find more hallowed grounds than the driveway to Graceland, Elvis’s former home, where you can witness what it was really like down in the Jungle Room.

4. Chicago, IL: A trip to the Windy City will be sure to have you dancing in the street. The hometown of Kanye West (who even named one of his children Chicago), the city is also an inspiration for fellow Midwesterner Chance the Rapper. But it’s not just talented hip-hop stars that find Chicago irresistible — the Windy City has a musical history that spans much longer than West’s prolific career and is the home to none other than rhythm and blues. Speaking of the blues, one visit to Rosa’s Lounge or Kingston Mines will cure whatever ails you, whether it’s a broken heart or a broken glass (be careful with all that dancing in public places).

5. Detroit, MI: After the home of R&B, it’s time to check out the home of Motown (and the automobile industry, duh): Detroit. Motor City should top every traveler’s list right now, but especially music-lovers’. When you do visit, be sure to pay your respects at The Old Miami, known as the “the CBGB of the Midwest,” which is the city’s most hallowed dive bar, having hosted acts including The White Stripes and local legend Rodriguez.

6. Austin, TX: This city is a favorite with bachelorette parties for a reason: Everything is bigger in Texas, and that includes the party scene. While it’s a perfect place to visit for a long weekend of country dancing and moonshine, Austin’s hedonism may be hard to resist during the weekday nine-to-five grind. Cory Morrow sang in an ode to Nashville, “I moved back to Austin to try to make a living, but it ain’t been so easy with those hill country women.” Swap out hill country women for hill country nightlife, and you’ve got the reason why Austin is dangerously fun. Not that there’s anything wrong with that. Stay weird, Austin.

7. New Orleans, LA: With its vibrant culture, gorgeous architecture, and delicious food, it’s hard to imagine what this Louisiana city could be lacking. (Northerners unused to Southern food should beware: Beignets and gin can be a deadly combo.) What makes the Big Easy especially appealing, though, is undoubtedly the music scene. The city is alive with music practically 24/7/365, whether it’s Mardi Gras or Jazzfest or a regular Monday. Louis Armstrong, born and raised in New Orleans, captured his city’s charm in song: “I see friends shaking hands, saying how do you do: They’re really saying, ‘I love you.’” Such overt affection could at best get you weird looks in NYC, but in New Orleans, it’s simply delightful: “I think to myself, What a wonderful world.” One weekend in NOLA, and we promise you’ll be just as happy-go-lucky as Armstrong.

8. New York City, NY: Check out new talent at The Bitter End and Rockwood Music Hall to find out why the city never sleeps. Hint: Too much dancing to do. As Lou Reed once sang, “New York City is the place where they said, Hey babe, take a walk on the wild side.” Act like Jennifer Lopez (or, to honor her Bronx roots, Jenny from the Block) and hop on the 6 Train, but keep your eyes peeled for unassuming buskers — they just might be an undercover Miley Cyrus. In the words of homegrown hero Jay-Z (hello, Brooklyn), “these streets will make you feel brand new,” and your subway performer just might be engaged to Liam Hemsworth.

9. Minneapolis, MN: This Minnesotan city may seem an odd choice to some, but it certainly isn’t unexpected to those in the know. Birthplace of former legend Prince, Minneapolis is home to a flourishing music scene — and a thriving food and cocktail scene too, as this bustling Twin City becomes more and more recognized for its culture and nightlife. Head to First Avenue’s 7th St Entry or Icehouse MPLS any time of year to hear phenomenal live acts. There’s nothing like dancing along to the guitar strums and drum beats of a local band to keep you warm in those cold Midwestern winters.

10. Boston, MA: Loved for its Dirty Water and cursed in its sports teams, the New England city’s large population of college students fuels its music scene, particularly in Cambridge (known as the “Brooklyn of Boston”). Check out the live music (and craft beer) at the underground Beat Brasserie in Harvard Square to revel in the very Williamsburg vibes of the hipster capital of Massachusetts. Then enjoy the live music tradition of the city’s Irish pubs, including The Point, The Black Rose, The Lansdowne,Bostonia Public House, Bull McCabe’s (Tuesday is reggae night), and The Druid (which hosts Irish traditional music “sessions” every Tuesday and Saturday). At sunset, head to the rooftop of The Envoy Hotel for cocktails and a gorgeous view of the Boston waterfront before visiting Wally’s Café Jazz Club or Club Passim to cap off a musical night out on the town.

Tweet us your favorite place to visit for live music @BritandCo!

Katherine Parker-Magyar
Katherine is a freelance writer focusing on travel, culture, lifestyle, and politics. Her work has appeared in The Week, Tasting Table, Elite Daily, POPSUGAR, and Electrify, among other publications. She's traveled to all 50 states and 40 countries, but calls New York City home. Follow along on Instagram at @katherineparkermagyar or visit her website at www.katherineparkermagyar.com.
Creativity
Travel
Creativity inspiration Music Vacation
More From Travel