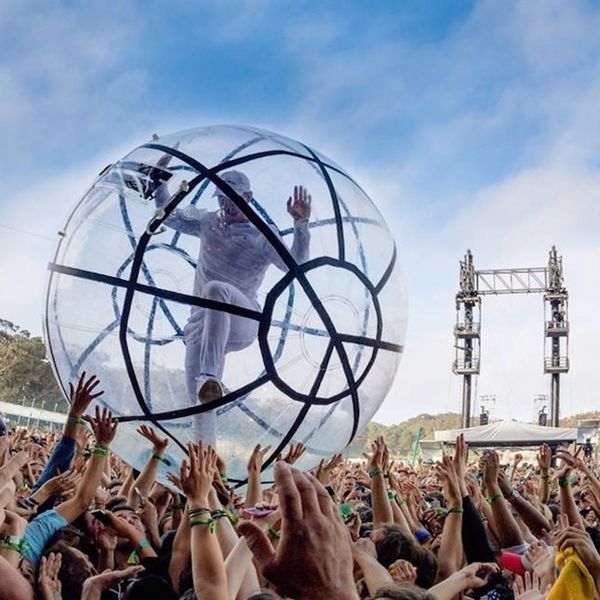 This weekend marks the four most FOMO-filled days of the year — Lollapalooza. Whether it’s too far, too expensive, or too dang crowded for your taste, Chicago’s internationally famous music festival isn’t on everyone’s agenda this summer.

But Lollapalooza and even other über popular festivals, such as Coachella and Bonnaroo, aren’t the only ones worth your while. In fact, you don’t have to request time off during the summer, drop half a grand, or even travel to a big city to see some of your favorite artists perform in a festival setting. Here is a list of nine lesser-known yet equally life-changing music festivals, in order from September to May, to start racking up your frequent flyer miles for.

St. Louis and Chicago are rivals when it comes to sports, and apparently now music festivals too. This festival, always at the beginning of September, takes place in the hip and happening Forest Park. See faves such as Weezer, Snoop Dogg, and Cage the Elephant perform this year. (Photo via Charles Reagan Studios/LouFest)

Seattle is known, in part, for its music scene, so it’s more than a little surprising that Bumbershoot, the city’s three-day music festival in September, has managed to stay largely under the national radar. This year’s headliners include Flume, Lorde, Odesza, Haim, and more.

Located just 20 minutes from Nashville, Pilgrimage is a music festival-goers dream, with its natural amphitheaters, amazing views, and, oh, killer lineup, despite only being three years old. Justin Timberlake, Eddie Vedder, The Avett Brothers, Walk the Moon, and more will take the stage this year. (Photo via Jason Myers Photography/Pilgrimage Music & Cultural Festival)

Food and music? An irresistible combo. Although nearly all music festivals have food and drinks available from local vendors, Music Tastes Good takes it to a whole new level. In a true feast for the senses, hear Alvvays, Ween, and Sleater-Kinney perform, and taste the offerings of renowned chefs from Long Beach and New Orleans. (Photo via Michael Amico/Music Tastes Good)

Phoenix may have cooled down a bit by late October, which is when Lost Lake takes place, but the lineup is still scorching hot. Head southwest for a weekend of music by The Killers, Chance the Rapper, Odesza, and Major Lazer; phenomenal food; interactive games; and local art. (Photo via Paige K. Parsons/Los Lake Festival)

Rock Boat is the only winter festival on this list and for good reason. During the last week of January, this cruise ship (yep, you read that right), with numerous stages and dozens of artists in tow, takes 2,500 lucky passengers from New Orleans to Progreso and Cozumel, Mexico. The 2018 event is already sold out, but waiting list sign-ups are encouraged. And hey, there’s always 2019. 2018 headliners include Barenaked Ladies, NEEDTOBREATHE, and Will Hoge. (Photo via Will Byington/Rock Boat)

Beachgoers and music-lovers unite for a weekend of sunshine, sand, and singing-along at SunFest each May. Performers run the gamut of genres; in 2017, Blink-182, Snoop Dogg, Weezer, Macklemore & Ryan Lewis, and more all shared the spotlight. The 2018 lineup has yet to be released.

For a weekend each May, it’s the musicians rather than the winemakers that draw visitors to Napa Valley. The Foo Fighters, Tom Petty & the Heartbreakers, Maroon 5, and Macklemore & Ryan Lewis were the main attractions of 2017. The music, the food, and, of course, the local wine make this a not-to-be-missed event.
Annamarie Higley
Annamarie is a Californian who's been plopped in the middle of Missouri for her undergraduate studies in magazine journalism. She's a hiker, an eater, a lover of words. In her opinion, nothing beats a well-made breakfast sammy or a well-crafted sentence.
Music
Creativity
Music