8 Hulu Original Comedies You Need in Your Life 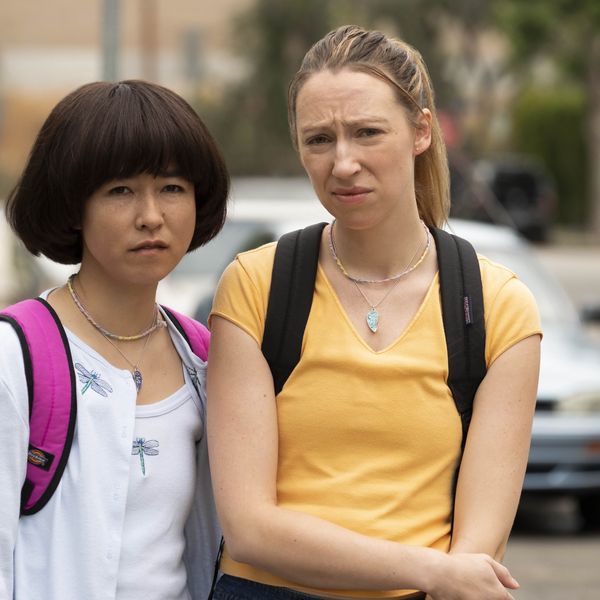 Hulu gets a lot of attention for its original dramatic programming — think The Handmaid's Tale or the recent Fyre Fraud documentary — but the streaming service also has some standout original comedy series on its slate. Some have already been canceled, but others are just getting started. Click through to read about eight Hulu original comedies, new and old, that you need in your life. (Photos via Allyson Riggs/Hulu + Alex Lombardi/Hulu + Erin Simkin/Hulu + Jake Thomas/Hulu)

Pen15: This scripted comedy, written by and for young women and produced by the comedy powerhouse Lonely Island, follows a pair of 13-year-old BFFs (played by co-creators Maya Erskine and Anna Konkleas) as they navigate the awkwardness of middle school. Not unlike the recent Netflix hit Big Mouth, Pen15, though not animated, doesn't shy away from the truths of puberty, crushes, and burgeoning sexuality, and while it may make you cringe (in a good way, if that's possible), it's endearing and addictive. (Photo via Alex Lombardi/Hulu)

Future Man: If you like your comedy on the strange and pop culture-referencing end of the spectrum (think majorly nostalgic Back to the Future vibes), you'll love this silly sci-fi show from executive producers Seth Rogen and Evan Goldberg. It follows a bored janitor (played by Josh Hutcherson) whose only escape is his favorite video game. But it turns out the game is actually a secret recruiting tool, and soon he's on a mission to save the world. (Photo via Erin Simkin/Hulu)

The Bisexual: After deciding to take a break from her same-sex partner of 10 years, Leila (played by Desiree Akhavan, who also wrote and directed the series) decides to explore her sexuality and start dating men as well as women. It's a modern, offbeat dating dramedy that that isn't afraid of taboo topics — and confronts plenty of painful truths along the way. (Photo via Tereza Cervenova/Hulu)

Casual: There are four seasons of Casual ready for binge-watching on Hulu, and while there won't be a fifth, it's still worth a watch. Michaela Watkins plays Valerie, a newly divorced single mother who moves in with her brother (Tommy Dewey). Together, the siblings navigate raising Valerie's teenage daughter while dealing with their own individual dramas. (Valerie even wades into online dating, which — as anyone who's ever tried it knows — provides plenty of fodder for laughs.) Casual has plenty of comic relief, but it's not without dark and deeply human twists and turns. (Photo via Greg Lewis/Hulu)

Difficult People: It could be filed under "not for everyone," but if you're into nonstop pop-culture references and biting, too-truthful cynicism, Difficult People is very likely for you. The comedy stars Billy Eichner and Julie Klausner as best friends and aspiring entertainers dealing with late-30s malaise, and while the show was canceled after just three seasons, it remains one of the best original series the streaming service has to offer. (Photo via KC Bailey/Hulu)

All Night: Though it's stacked with YouTube stars you may not be super familiar with, this teen comedy is reminiscent of classic titles such as Can't Hardly Wait or The Breakfast Club. The 10-episode series takes place over the course of one overnight graduation party, which sees the new grads doing what they can to make good on their last chances at love, friendship, popularity, and more before moving on to college. (Photo via Jake Thomas/Hulu)

I Love You, America: Comedian Sarah Silverman's talk show was canceled after just two seasons, but its format — which used current events as a way to attempt to bridge political divides and polarization in America — remains as timely now as it was when it was first released. (Photo via Ali Goldstein/Hulu)

Shrill: Saturday Night Live's Aidy Bryant stars in Hulu's highly anticipated new comedy series, based on the book Shrill: Notes from a Loud Woman by Lindy West. Bryant plays Annie, an aspiring journalist who, as she becomes increasingly aware of the pressure society puts on her based on the way she looks, defies the limitations and acts as confident as she feels inside. Shrill premieres on March 15, 2019. (Photo via Allyson Riggs/Hulu)

Dr. Kenosha Gleaton Teaches Brit Everything She Should Know About Women's Health