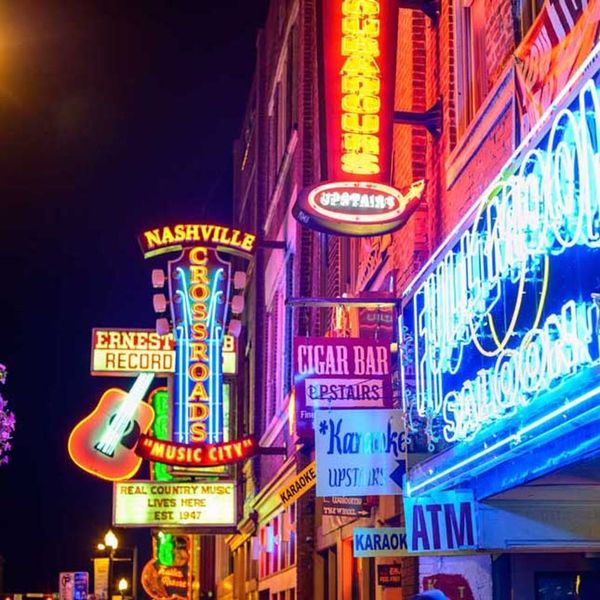 Toying with the idea of a trip to Nashville? Get ready to stir up some serious wow: Nashvegas beckons, y’all. This southern beaut offers countless attractions, events and activities for every kind of traveler (and did we mention concerts?). Whether fashion, fabled landmarks or flirting at the bar with a southern drawl is your cuppa (sweet) tea, this city’s got it. Ready to call it quits for the night? Probably not, but from boutique hotels to an Airbnb that’s actually a sleek tour bus, this Tennessee gem doesn’t disappoint. Recently voted Travel + Leisure’s Reader’s Choice for Top Destination of the Year, here’s why you should grab your favorite boots and giddy on up!

1. The food will leave you vowing to pack your bags and sign a lease. This southern sweetheart isn’t just for hot chicken enthusiasts (though they’ve got a hot chicken shack with a James Beard under their belt!). From shared plates to backyard-to-table offerings, you’ll find endless tantalizing choices to fulfill your wildest culinary fantasies. Some new and noteworthy spots that are must-adds to your wish list: Le Sel, Butcher & Bee, 5th & Taylor, Fifty First Kitchen & Bar, Little Octopus and Biscuit Love. Brunchavores: Bring your A-game and an insatiable appetite for bloody marys with more accoutrements than an interior designer has throw pillows. (Photos via Biscuit Love)

2. The fashion will blow you away. They’re as fiercely proud of their clothing designers, handbag and shoe maestros and jewelry whizzes as they are their musicians — and with good reason. Nashville is home to a burgeoning group of creative class acts. Swing by Ceri Hoover for bags that will make you swoon, Two Son to put clothing addicts in a happiness coma and Judith Bright for bold, streamlined geometric jewelry that will make you feel hall-of-fame-ready. (Photo via Judith Bright)

3. Your (air) guitar will gently weep at the exorbitantly vibrant music scene. From multi-day festivals to curbside performances that will have you tweeting with certainty that you just met the next Ms. Swift (The city holds no grudges that the city’s darling moved to NYC. In fact, locals will proudly direct you to swing by the Taylor Swift Education Center on your visit to the Country Music Hall of Fame), there’s no shortage of incredible musical sounds to soak up in, well, Music City.

Don’t miss the city’s famed honky-tonks that offer the charm of your favorite gritty dive’s subtle anonymity muddled with Hart of Dixie Rammer Jammer’s small-town hominess. Spotting that special someone across the bar and penning your name in eyeliner on a salvaged napkin from your double-whiskey coke? That’s the kinda stuff dreams are made of in this playful, flirtatious town. (Photo via Getty)

4. There’s a slew of awesome festivals. For sure, Music City works hard, but it also gets that whole work-life balance thing and knows how to play equally hard. From undiscovered talent crushing it in basement music dens for Tin Pan South, a festival celebrating songwriters, to sold-out arenas, you don’t even have to be a country music fan to find a dizzying array of beats you can get behind. Also, did we mention this year’s Antiques and Garden Show will feature none other than Goop queen, Gwyneth Paltrow, herself? P.S. If you’re missing the CMA Music Festival, well, you’re doing it wrong. (Photo via Music City Food + Wine Festival)

5. They have their own “Brooklyn.” The real BK? Pfffft. So 2015. Nashville’s own hub of free-spirited, hipster, creative-dreamland? Game on for the new year. Enter: East Nashville. Stop by Bar Luca, which strikes the perfect balance of classy meets approachable for a happy hour libation (the charcuterie boards and cheese plates will lure you in for a second round) or mosey around the walkable neighborhood filled with tucked-away shopping gems and epicurean havens. From vintage jewelry and furniture to small-batch chocolate, with eclectic galleries, eco-friendly shopping and vegan-friendly restaurants also in the mix, that lease-hunting may just get pushed up higher on your to-do list. (Photo via Andrea Behrends for Bar Luca)

6. Because Sam Hunt. Yep, he’s enough of a reason. He has played free, ears-still-ringing-the-next-day street concerts here. Thanks to Nashville’s small town and friendly vibe, you don’t need Carrie Bradshaw-status luck to wind up bumping into him at a local bar after his gig and capping your night with a phone brimming with selfies of you and the football player turned music dreamboat. (Photo via Rick Diamond/Getty)