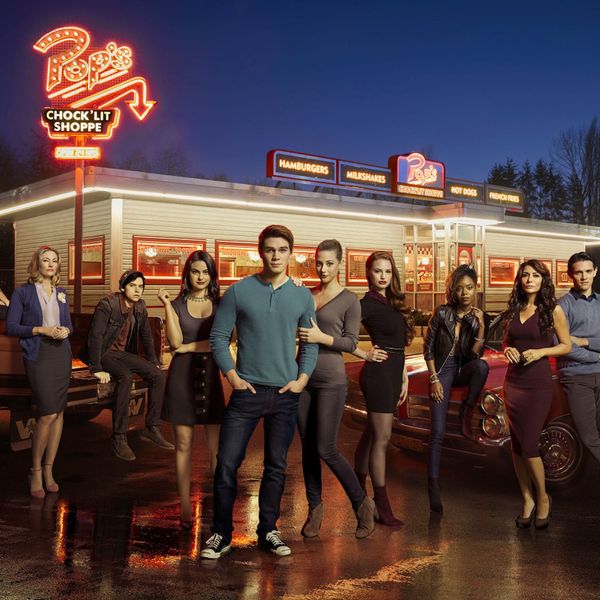 Welcome to Brit + Co's Binge-Worthy Bulletin, a series where we choose one show we're obsessed with and tell you all the reasons why. This week's pick is Riverdale, which aired its season 3 fall finale on December 12 on the CW. The next new episode isn't until January, so now's the perfect time to catch up if you fell behind, or to start fresh if you've always been curious about the teen drama phenomenon. Still not sure whether to add it to your queue? Click through to read all the reasons why we love this modern adaptation of the classic comic book franchise. (Photo via Art Streiber/The CW)

Let's cut to the chase — it's ridiculous in the best way: Murder mysteries, small-town politics, gargoyle kings, and cults are just some of the strange and wonderful narratives you'll see on Riverdale. While some viewers think season 3 has lost the magic that came with the surprise left-of-center teen soap opera of season 1, its indulgence in its strangeness has actually turned out to be a strength. The catch is that you can't take it too seriously — because the show certainly doesn't. Just lean in to the wildly fun journey. We promise it'll still leave you surprised and delighted. (Photo via Dean Buscher/The CW)

Women rule Riverdale (both the town and the show): The CW drama might be over the top in its story lines, but one thing it does take seriously is the fierceness of its females. Sure, there are some standard love-triangle tropes — truly, what TV show would you want to watch without them? — but the women also have fully defined lives and personalities outside of their relationships. And the younger girls, at least, always put each other first and defend their fellow ladies to the death, regardless of the tangled webs they have to navigate in the process. (Photo via Dean Buscher/The CW)

It's Cheryl Blossom's world, and we're just living in it: Speaking of the show's strong female characters, Cheryl Blossom, played by Madelaine Petsch, might be the best of them all. A total scene-stealer, Cheryl is a stone-cold mean girl who doesn't care what anyone thinks. But she's not one-dimensional, either: She has a traumatic past and nurtures deep vulnerabilities and insecurities, too. Somehow, though, she's always willing to stand up for what's right, no matter who she has to take on in the process. (Photo via Dean Buscher/The CW)

There are several progressive characters and story lines: From episodes about girls seeking revenge for slut-shaming to openly bisexual and gay characters and representation for people of color, Riverdale strives for and achieves a subtly inclusive approach to world building. It's certainly not perfect, but it tries harder than most. (Photo via Katie Yu/The CW)

It's a weekly dose of escapism: Per our first point about Riverdale, while at its core the show is about melodramatic and angsty teenagers, there are wild left turns, supernatural sojourns, and campy but delightful musical one-offs that untether it from reality and give us the hour of TV escapism we so desperately need. (Photo via Katie Yu/The CW)

These teens have brains: For all of Riverdale's escapism, it also features some very real — and inspiring — moments of teenage rebellion. Archie, Jughead, Veronica, Betty, and the crew can organize and protest at a moment's notice, and they have an unending interest in fighting for the good of their town in the face of corruption and evil. Jughead and Betty have even become amateur detectives and crime-fighters, sometimes using the power of the press to enact justice. And did we mention that Veronica is the owner of Riverdale's hottest new business, the speakeasy under Pop's Chock'lit Shoppe? (Photo via Dean Buscher/The CW)

There's some truly stunning fashion: Cheryl's cherry-red everything is a constant showstopper, and Josie rocks the rockstar look better than anyone. But can we talk about Veronica Lodge's 'fits? Her posh, Upper East Side roots come through in her Gossip Girl-esque preppiness, but like Riverdale itself, she has an edgier side, too. (Photo via Robert Falconer/The CW)

In the end, it's a fun, soapy, teen drama: Take away all the weirdness, and what you're left with is still a high school drama that is nothing without its inherent teen angst, love triangles, and friendships. Ultimately, that's all we really need. (Photo via Katie Yu/The CW)