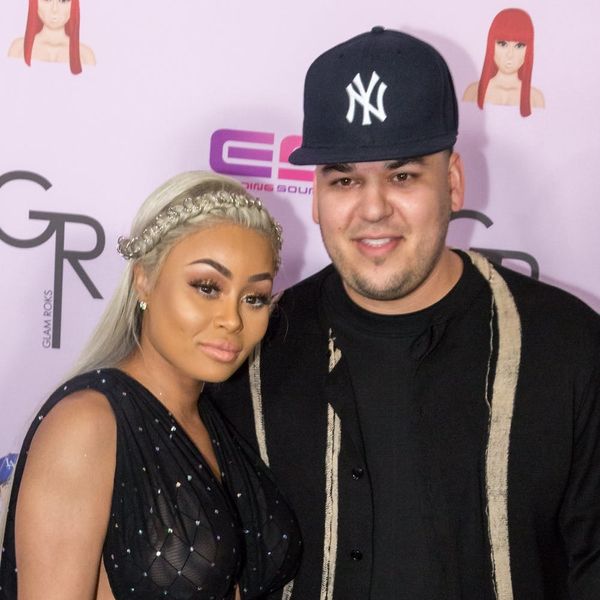 All the kraziest Kardashian moments of 2016 may have just been topped by some SERIOUS family mama drama from the Rob Kardashian and Blac Chyna camp. The couple, who has been showing plenty of relationship red flags for months, may finally have reached an unfixable breaking point, as Chyna has allegedly taken their one-month-old daughter Dream and moved out.

It all started last night, when Blac Chyna’s Instagram was reportedly hacked and filled with screenshots of conversations the entrepreneur was having with her lawyer, as well as with Jaden Smith and Young Thug. In the posts, which have since been deleted, Chyna could be seen calling her man “lazy,” “fat” and “insecure” and threatening to leave him, allegedly writing “Imma give Rob 1 year to get it together. Or I’m gone,” reports E!.

Rob soon turned to Insta and Snapchat to give his side of the story in the above, now deleted post, telling followers, “Sorry to be so open but I’m not feeling so good after seeing @blacchyna messages about me and what her plans were… My baby girl is one month old and Chyna took her and left this beautiful home that I just bought for us. Right before Christmas.” Ouch.

Rob continued on to say that “I really believed she was in love with me the way that I was with her, and I am so hurt and never felt this before. It’s different when you have a kid with someone,” he said. “And after reading Chyna’s messages to her best friend she was going to drop me after a year. She didn’t even make it to that. I am so broken. This is a woman I fought my entire family for.”

Rob then took another now-deleted snap of Dream’s empty nursery, sharing even more heart-wrenching thoughts, writing: “I am so confused how a man who gives and loves everything about a woman is the one left alone. I’m sorry for being so open once again…this is killing me.”

WOW. We’ve gotta say, our hearts are breaking a little for Rob RN.

Of course, Chyna wasted no time firing back, creating a brand new Insta page and allegedly going on a nasty rant against her fiance, before deleting everything. “I’M DONE!” the 28-year-old declared, according to E! “This entire year I have done nothing but help Rob! It’s so SAD & PATHETIC how low he’d stoop to cover up HIS PERSONAL ISSUES! Rob is mentally ill & refuses to seek help! He self medicates which makes it worse,” she added, eventually concluding: “If you have ever dealt with a bipolar/depressed person you [understand.]”

Things took a turn for the strange, however, when Rob began reposting (now-deleted) memes on his Insta, causing many to question the legitimacy of the alleged dramz. “Just cuz I’m posting them doesn’t mean this wasnt all serious,” he defended. “This is all very real and serious to me and I’m trying to cheer myself up with these and they are making me laugh. So relax.”

Chyna dropped the biggest eyebrow-raising post of all this morning, however, when she shared a preview for the Rob & Chyna Baby Special set to air tonight on E! and captioned it: “Everything would be explained after the show tonight.” Wait, what? Is she saying this was all a hoax? Rob seemed genuinely hurt, but admittedly, him sharing funny memes about the situation did come off as a tad strange.

Hmmm. We’re not sure WHAT to think anymore. Guess we’ll just have to watch the show tonight, and in the meantime, we’ll be paying extra close attention to Rob and Chyna’s social pages for more explosions… or a reconciliation.

Do you think this dramz was just a publicity stunt? Tweet us @BritandCo.