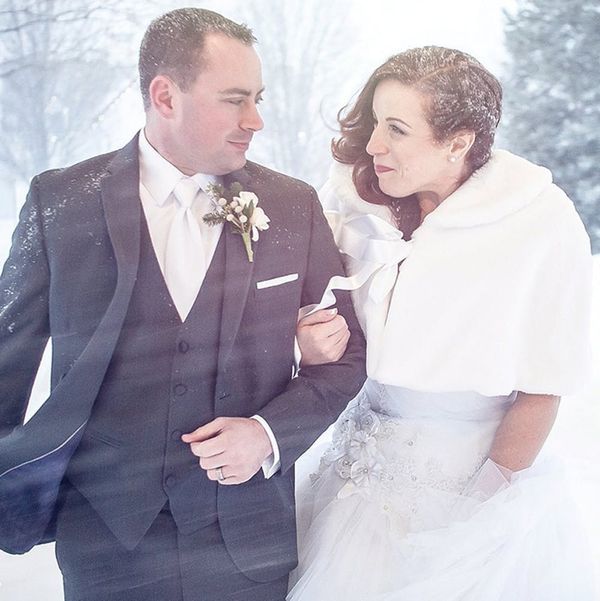 When you’re facing the blizzard of the year, most people lock the doors, queue up Netflix and don’t leave the house until they have to go to work on Monday (obviously with the exception of these 15 folks who had the best snow day ever). These two couples aren’t most people. Rather than cancel preexisting plans to celebrate their various relationship milestones, Felicia + David and Carmen + Kevin decided to make the best of a snowy situation by turning their wedding and engagement shoots into a winter dream come true.

This weekend Baltimore received the most snow it’s ever had (29.2 inches) but Felicia and David didn’t let that stop them from having a stunning engagement photo shoot. The two left work last Friday and decided to drive nearly 40 minutes to Fort Meade, Maryland, to play in the snow.

Felicia told ABC News, “We had wanted to do a snow photo shoot for a long time, so any opportunity that presented itself, we were just going to take it. I heard on the news that there was going to be a blizzard so I said surely there’ll be snow. I called the photographer [Dotun Ayodeji] and said, ‘Are you up for it?’ And he said, ‘Oh my God, you’re reading my mind.'”

It seems as though an engagement shoot out in the elements was only appropriate considering David proposed right before Hurricane Joaquin in October of last year. If things keep going this way, we’re guessing their wedding will more than likely take place in the middle of a wind storm or something.

After they got engaged, Pennsylvania-based couple Carmen and Kevin decided they wanted a winter wedding because Carmen’s seasonal allergies are so severe. They were up for a little bit of snow. Instead they got a blizzard.

Thankfully, most of the event was set to take place indoors so the primary concern for these two was that their guests actually be able to attend. Their photographer Jeffrey Sabotta actually took it upon himself to stay at the hotel where the reception was being held all weekend so he would be as accessible as possible for the couple. A fraction of the guests showed up, but by some wedding miracle all that did arrive traveled safely.

In a blog post about the wedding, Jeffrey writes that Kevin told his associate photographer, “It was not what we planned for the day, but I couldn’t be any happier at this moment.”

Have you spotted any other crazy engagement or wedding themed blizzard photos? Share with us on Twitter @britandco.

Cortney Clift
Cortney is the senior writer and special projects editor at Brit + Co. She typically covers topics related to women's issues, politics, and lifestyle. When she's not buried behind her computer you'll find her exploring New York City or planning her next big adventure.
Engagement
Entertainment
Engagement Winter Weddings
More From Entertainment