Why Everyone Can’t Stop Talking About Bone Broth 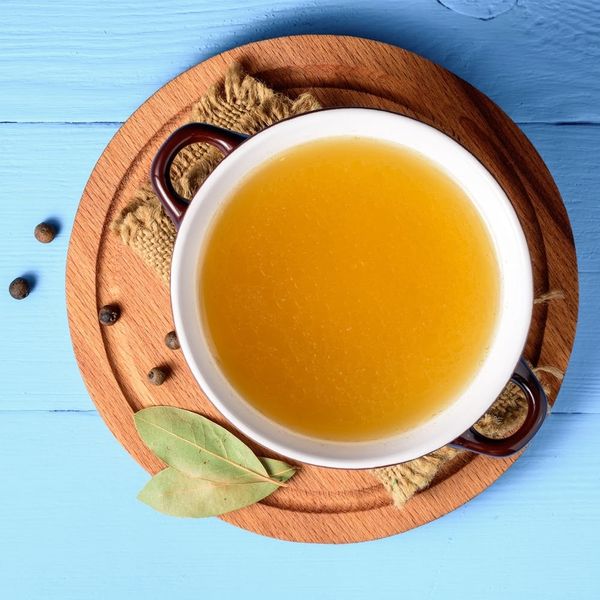 We’re always chasing after the latest and greatest superfoods, which usually tend to be trendy powders, flavorful herbs, and little-known fruits and vegetables that are chock-full of antioxidants. But one such superfood that’s been making waves in the past few years is less of a new discovery than it is a simple staple that’s been around for centuries: bone broth.

We are in an era of peak bone broth — you can find standalone broth bars, replace your morning coffee with a warm cup of broth to go at places like New-York based Brodo, or find creative ways to drink it, like bone broth lattes. You can buy it fresh from a butcher, as a powder, and even in K-cups.

Celebs like Gwyneth Paltrow, Salma Hayek, and Shailene Woodley are all fans. It’s been heralded as everything from a beauty elixir to an anti-aging food to the secret weapon behind Kobe Bryant’s post-injury comeback. Here’s the thing: Bone broth isn’t new. People have been boiling bones for ages, and anyone who has ever been sick has most likely had a grandmother’s homemade chicken soup (made with bone broth). So why the resurgence? The rise of new diets has increased demand for healthy, low-carb, high-protein foods. And Paleo-, Whole30- and Keto-friendly bone broth — basically animal bones simmered in water for extended periods of time so that they release collagen, minerals, and gelatin — is a convenient and low-calorie way to consume digestible nutrients.

“It wasn’t until very recently that traditional bone broth was removed from daily consumption and replaced with MSG-filled broths and soups made of not much more than salt and artificial flavorings; an easy replacement for nourishing foods,” shares Meredith Cochran, co-founder and CEO of The Osso Good Co. and author of The 7-Day Bone Broth Diet Plan. “Recently, people are beginning to remember that health is affected by what we consume… While it’s far from new, people are finally realizing that consuming high-quality bone broth just feels good. It’s also a versatile and fresh way to add extra nutrients to your diet, either by sipping a mug of bone broth or adding it to different recipes.”

Adds Maggie Moon, MS, RDN, and author of The MIND Diet, “People want their food to have functional benefits, and if it comes in a savory cup of warm goodness, all the better. The promise of bone broth is that it unlocks nutrients from animal bones such as collagen, anti-inflammatory fats, amino acids, and minerals, and that all of this will help with achy joints, leaky gut, dull skin, and the common cold.”

Moon does however caution that the scientific evidence of bone broth’s health benefits is limited. One study found that hot chicken soup could help with congestion. Another 2000 study found that “chicken soup may contain a number of substances with beneficial medicinal activity,” including mild anti-inflammatory effects on upper respiratory tract infections. But a 2017 study found that the levels of essential metals like calcium and magnesium in homemade bone broth are relatively low (but, on the upside, so are the levels of toxic heavy metals found in bones that could also get transferred to broth). And while the benefits of the nutrients found in bone broth (collagen and gelatin, for example) have been reported, there are few studies of bone broth itself as a vessel for those nutrients. Likewise, Moon explains, “drinking collagen doesn’t mean adding collagen directly to your skin and joints. That’s not how metabolism works.”

That’s not to say that bone broth isn’t healthy — just that there isn’t enough scientific evidence definitively weighing in to either justify or debunk the current hype. There are also countless ways to make bone broth, which affects the nutritional value of any one particular broth. “Bone broth can add some amino acids to the diet,” Moon agrees, “but so can eating seafood, eggs, beans, nuts, and lean poultry. The final word: If you’re curious about it, try a warming cup of what is basically soup, but don’t go replacing all your fluids with broth just yet.”

Alas, when a food is touted as a cure-all miracle food, it is likely too good to be true. Given the longevity of bone broth as a food staple in various cultures, there’s probably no harm incorporating some daily bone broth into a well-balanced diet. There’s also nothing quite as comforting as a cup of chicken soup when you’re feeling under the weather. So whether you’re looking to down a broffee (bone broth + coffee) in the morning, incorporate a post-workout drink a la Kobe Bryant, or just enjoy a satisfying low-calorie snack, here are a few options for purveyors to help you get your sip on.

1. Broth RX ($9+): Broth RX started when co-founders Jane Guerra and Kristen Betancur started making it in small batches at home. The company now offers delivery of their three broths made from pasture-raised chickens and grass-fed, grass-finished beef bones. According to Guerra and Betancur, “The quality of bones used in the broth is very important and makes all the difference.” Their broths use animals that “eat organic clover and grass and are never subjected to artificial hormones, growth promotions, or antibiotics. This means they never eat grains, corn, soy, or other types of feed.” Broth RX broths are slow cooked at a low temperature (24 hours for chicken and 48 hours for beef), and some include immunity boosting ingredients such as ginger and turmeric.

2. Osso Good Co. ($10+): Osso Good’s broths are made using the whole animal, which Cochran says allows them to contain almost all 22 types of collagen. Their Chinese-herb-infused broths are based on ancient formulas by traditional Chinese medical doctors. For example, the Revive the Gut broth has herbs to “help strengthen the spleen [and] move and tonify the qi (the circulating life force), while nourishing and invigorating the blood.” Osso Good also sells bone broth cleanses and Paleo-friendly soups made with a bone broth base.

3. Butcher’s Bone Broth ($8): San Francisco’s popular food truck RoliRoti (there are regular lines to grab one of their famous porchetta sandwiches) just launched an organic bone broth, available across a number of California retailers. Their Butcher’s Bone Broth — made from organic and locally sourced bones, filtered waters, and organic carrots — is always fresh (refrigerated, not frozen) to prevent any taste and texture changes from freezing and to provide the convenience of immediate consumption.