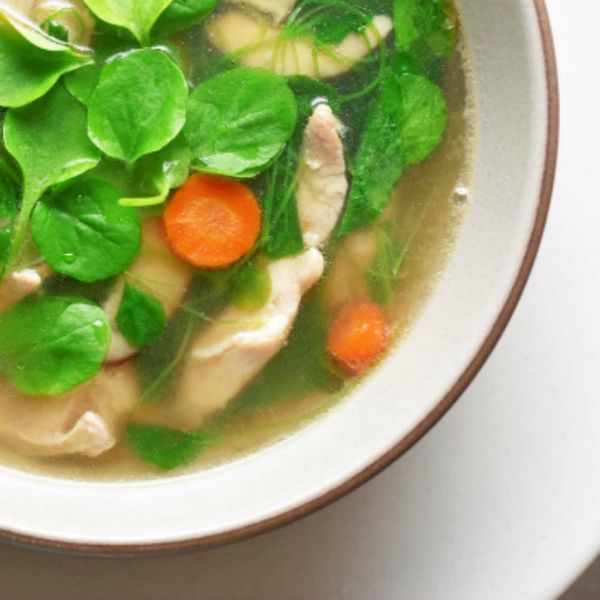 We’re seeing it in the green market on Saturday, co-workers are sipping it at their desks like it’s Oolong, and apparently New York chefs can’t keep up with the demand. People are lining up for bone broth! But, word: You can make it yourself, easy-peasy.

It’s not difficult, it’s not expensive, and it doesn’t even take a lot of time if you use a slow cooker or a pressure cooker, like Michelle Tam of Nom Nom Paleo.

We have the “ancestral eating” movement, with its emphasis on whole foods, grass-fed beef and free-range chicken and eggs, to thank for the renewed interest in chicken stock — because, despite the primal-sounding name, plain old stock is what it is. But you don’t have to eat like a cavewoman to reap the health benefits. And the rewards are many. According to Osteopathic Physician Dr. Joseph Mercola, bone broth inhibits infection; reduces joint pain and inflammation; promotes healthy hair, nail and bones; and can even help heal digestive issues, such as gut permeability that is a main cause of food allergies in some people.

So, what is bone broth? Simply put, it is stock that has been simmered so long that the collagen-rich bones begin to break down and leach protein, minerals and gelatinous goodness. Once you’ve strained it, you can sip it straight or flavored with ginger, lemongrass or other herbs and spices. Or add it to stews and soups, such as Nom Nom Paleo’s nutrient-dense Watercress and Chicken Soup, or really any chicken recipe that calls for chicken stock or broth.

The tastiest bone broth recipes call for 2-3 pounds of chicken, plus the gastro triumvirate carrots, celery and onion (AKA, mirepoix mix, available already cleaned and chopped at Trader Joe’s). Add water to cover and a dash of apple cider vinegar, which helps break down the bones more efficiently, and you are on your way to enjoying bone broth.

If you are in a hurry or just want to set it and forget it, Nom Nom Paleo has two recipes: Pressure Cooker Bone Broth, adapted for a quick cooking pressure cooker, and Slow Cooker Bone Broth, adapted for a slow cooker. If you use the slow cooker or if your pressure cooker has a “keep it warm” function, it can simmer away while you’re asleep, at work, or kvetching with friends.

Don’t have a pressure cooker or a slow cooker? No biggie. Chef Demetra Overton of Sweet Savant has a simmer-on-the-stovetop Homemade Bone Broth Recipe. She adds additional beef bones to enrich the nutrients and give it a more complex flavor.

Would you like a friend in the kitchen to show you the ropes? Cook along with Nom Nom Paleo over at Periscope.

Got a healthy chicken recipe that you just love? Tag us on Instagram @britandco. Your pic might be included in a future article.

Sally Jones
Sally Jones is a writer and editor living in New York City. She has worked at many websites including iVillage, Ladies Home Journal, More, Parenting, Cosmopolitan, The Knot and YourTango, in jobs ranging from editor to COO. Renovation and interior design are her unhealthy obsessions hobbies. She has renovated every home she's lived in, including the rentals, and like... whoa, who does that? You can catch her at her blog Renov8or.
Paleo
Recipes
Paleo Soup Recipes
The Conversation
Reviews:
More From Recipes