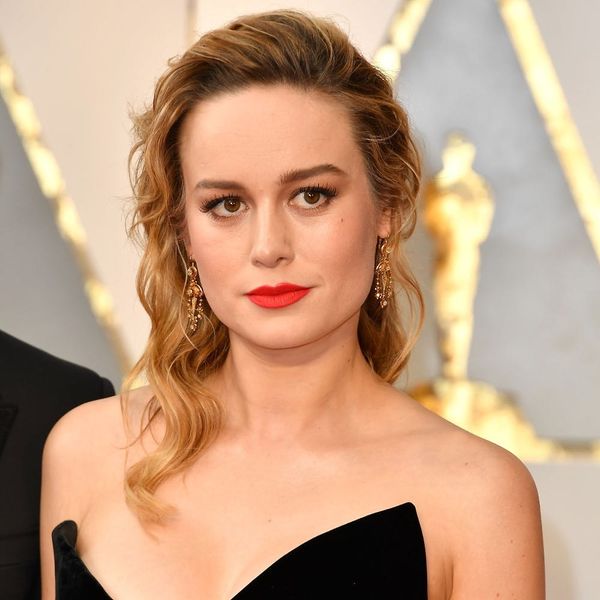 When Casey Affleck stepped up to accept his Oscar for Best Actor in a Leading Role, folks weren’t necessarily stunned (he had already won the Golden Globe for his role in Manchester by the Sea, after all), but plenty of viewers were also totally aware of the controversial sitch occurring up on stage with Brie Larson, a sexual assault activist, once again being forced to hand an award to Casey Affleck (you might recall that it was also Larson handing him the award at the Golden Globes), a man accused of sexual harassment.

As last year’s Best Actress winner for her role in Room, it was Larson’s turn to present the award for Best Actor, which she did while looking like an image of classic Hollywood beauty and charming the crowd with her confident skills on one of Hollywood’s biggest nights.

When the time came for her to announce Casey Affleck’s win, some folks clapped, while others cringed — Chrissy Teigen even pretended to nap. We can only assume that while Larson was smiling on the outside, she too was cringing on the inside.

Enduring the expected embrace and kiss on the cheek, Larson wasn’t totally cold toward Affleck, but she certainly wasn’t the warm and bubbly Oscar winner we’ve witnessed on many other occasions.

She was also quick to step back, politely yet firmly removing herself from Affleck’s moment.

She did, however, refuse to clap for Affleck, in a move that earned her total respect from plenty.

As the two walked off stage, Larson was again a picture of perfect poise and class. There was no chatter between the two, with the new winner striding off before escorting Larson offstage.

What do you think about Brie Larson handing Casey Affleck his Oscar? Let us know @BritandCo!

Desiree O
Desirée O is a ‘Professional Bohemian’ who loves anything and everything related to the arts, entertainment, and pop culture. She ADORES being a ‘Newsy’ for Brit + Co, covering all of the latest tidbits of awesomeness that you want to read about. When she’s not writing, she’s either making messy art, going on long adventurous walks with her camera, or poking around over at bohemianizm (http://www.bohemianizm.com/). You can find out about Desirée O and her work at http://DesireeO.com/ or follow her on Twitter @DesireeO.
Controversy
Celebrity News
Controversy Oscars
More From Celebrity News