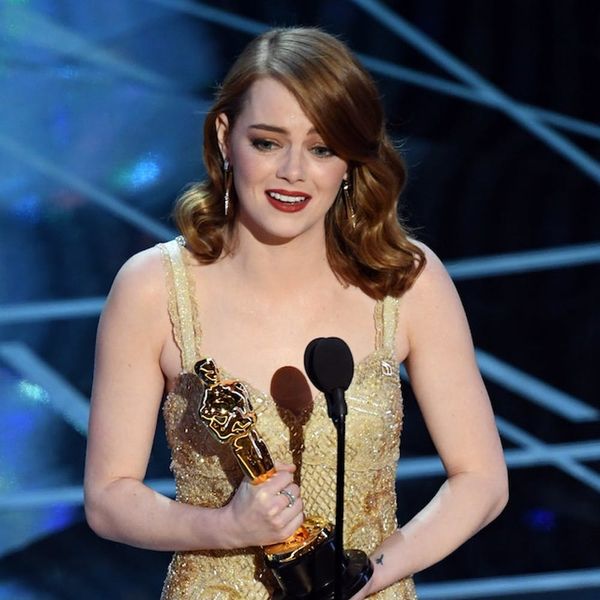 We’ve got all the Oscars tidbits you might have missed last night in this morning’s top news stories! Check ’em out below.

1. Did you wake up this morning still in disbelief about the on-stage mix up during the Oscars’ biggest award? Us too. If you turned off the TV and started tidying your snack carnage as soon as La La Land was announced for Best Picture, you probably missed the fact that there was actually a HUGE mistake, and Moonlight won the prestigious award. The on-stage shuffle that ensued to get the mistaken winners off-stage and the real winners on was PAINFULLY cringeworthy, but the La La Land crew did so more graciously than we can ever give them credit for. Emma Stone, who could be seen mouthing “Oh my god. Oh my god,” before smiling and moving offstage, later said in a press interview that while it was a confusing moment and a disappointment to be sure, she was unbelievably happy for the cast of the film that did win. When asked about the snafu, she replied, “Yes of course, I’m an actor, I’ve always dreamed of this kind of thing,” but as for losing out for best picture, her excitement was genuine when she uttered the words, “I f*cking love Moonlight! God I love Moonlight! So much. I am SO excited for Moonlight. I think we would have loved to win best picture. But we are SO excited for Moonlight. I think it’s one of the best films of all time, so I was pretty beside myself.” Class act! (Photo via Kevin Winter/Getty)

When Ryan Gosling scats in your ear. #Oscars2017 pic.twitter.com/HGFeczhbM7

2. This whispering Ryan Gosling meme was the TRUE Oscars winner of the night. During one bit of last night’s epic show, a bus full of Hollywood tourists, who thought they were simply there to check out an exhibit of Oscars gowns, were actually led into the room where the live event was happening. As the line of shocked and excited movie fans schmoozed with their fave stars in the front few rows, taking selfies and shaking hands, Ryan Gosling had a moment with one very excited woman in particular. A pic of her shocked reaction to him seemingly whispering something in her ear instantly became a viral hit. People captioned the pic with imaginings of what sweet nothings Gosling might have been telling her, including everything from winner predictions to the fact that they were all Russian spies. Internet, never change.

Me too @chrissyteigen #Oscars #Oscars2017 pic.twitter.com/elhqlwnaGx

3. Chrissy Teigen asleep at the Oscars is all of us. During Casey Affleck’s controversial win for Actor in a Leading Role, most smiled politely and cheered, but Chrissy Teigen couldn’t be bothered. Girl was asleep — or pretending to be — on husband John Legend’s shoulder. In her defense, the show HAD already been running for about three hours at that point, so we can’t really blame her, but many on Twitter pre-emptively called her their Monday spirit animal after the shade (which, same). As for Teigen herself, she later joked, “Just woke up, what happened?”

.@jtimberlake and Jessica Biel with the video bomb of Emma Stone at the #Oscars pic.twitter.com/3SxnHcCyFW

4. Emma Stone was NOT here for Justin Timberlake’s red carpet photobomb. Jessica Biel and Justin Timberlake were their usual goofy selves on the red carpet, with Timberlake jumping into the back of Biel’s pics while her stunning gold gown was being photographed. He attempted to do the same to Emma Stone, mugging behind her as she was giving an interview, but she either didn’t notice or refused to acknowledge him for quite some time. When she did finally acknowledge him, her screw face (whether in jest or otherwise) said it all: Let this Oscar-nominated actress have their dang minute on camera!

5. Nicole Kidman can’t clap. During Viola Davis’s emotional acceptance speech, Nicole Kidman was filmed applauding as enthusiastically as everyone else, only her clapping looked a little… different than most. The internet soon caught on, and yet another meme was born.

Good morning everybody! Went to sleep early last night. So… what I miss? #Oscars

6. Quote of the day: “Went to sleep early last night. So…what I miss?” Steve Harvey, who once announced the wrong Miss Universe winner, reacts perfectly to the Oscars mix-up.

Have you ever had to own up to a big mix-up? Let us know over @BritandCo!