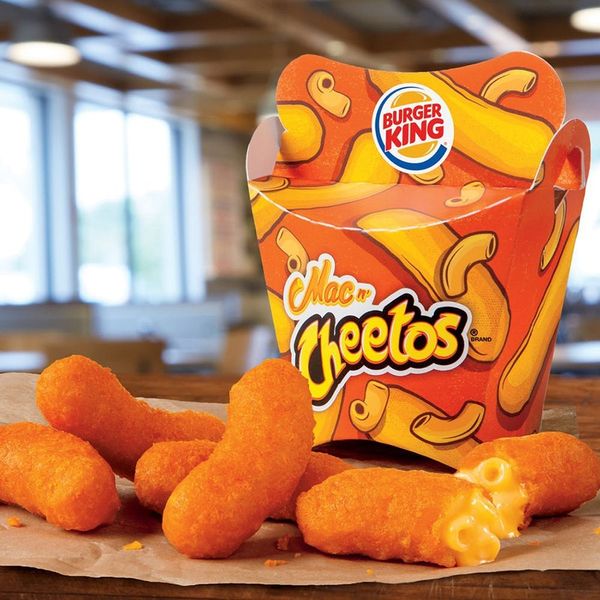 When it comes to indulgent junk food, there are a few classics we’ll always be suckers for: the midday rainbow donut, some mozzarella sticks, a not-so-healthy serving of funfetti nachos… But hold up, y’all. There’s a new snack in town, and it’s seriously about to change the game. Say hello to your new best friends (and worst enemies): Burger King’s new Mac n’ Cheetos.

This is not a drill people. This is a real menu item now available at the fast food chain. As you may be able to gather from the photo, these cheesy treats are similar to mozzarella sticks, except that the mozzarella has been replaced by mac n’ cheese and the breadcrumbs have been subbed for ground up Cheetos.

The dish is selling for $2.49 for a five-pack and has already been unveiled in select Burger King locations. While some junk food and fast food hybrids haven’t been received quite so warmly (ahem, Taco Bell’s Captain Crunch donut holes), this seems to be a hit with the people.

Yeahhhh! So, This is gonna be a problem! #SoGOOD!! @BurgerKing #MacNCheetos #BK pic.twitter.com/QDIDXr5My1

@BurgerKing struck gold with these #macncheetos

If you’re at all interested in giving these a try, we suggest you act fast. It’s a limited edition snack and will only be sold for about eight weeks or until supplies run out. And judging by how well the Twitterverse is reacting, we’re guessing they might not even last that long.

Cortney Clift
Cortney is the senior writer and special projects editor at Brit + Co. She typically covers topics related to women's issues, politics, and lifestyle. When she's not buried behind her computer you'll find her exploring New York City or planning her next big adventure.
Snacks
Food News
Snacks
The Conversation