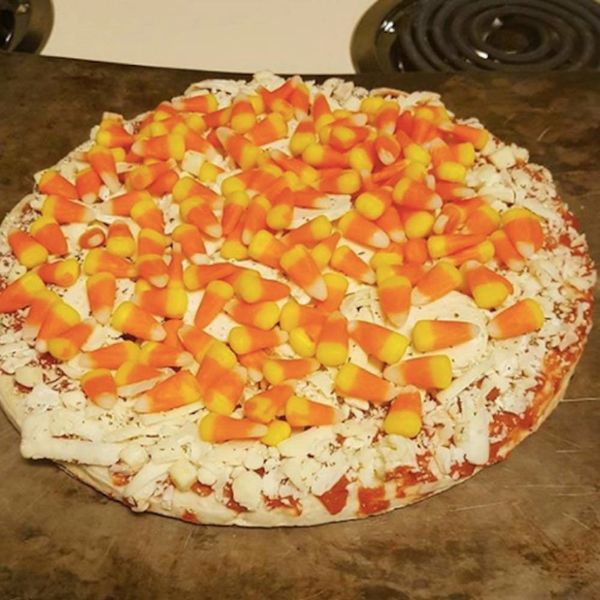 Now that fall has officially arrived, we’ve seen plenty of delicious seasonal treats popping up, from pumpkin spice churros and Oogie Boogie popcorn at Disneyland to mouthwatering healthy pumpkin smoothies to rival even our beloved PSL.

One festive snack in particular, however, has the internet rather divided: Say hello to candy corn pizza.

Tis the season my dudes pic.twitter.com/BzNqeaY191

Twitter user @Asswolf debuted the masterful creation on social media earlier this week, simply writing, “‘Tis the season my dudes,” and before he knew it, the cheesy candy invention had gone viral, with more than 15,000 retweets and close to 35,000 likes.

Reactions to the corn-infused dough were severely mixed, with some living for its existence, and others feeling ill at the sight of it.

Candy corn on pizza? #Beneath 🤢🤢🤢 pic.twitter.com/LZAfovTAKi

me? i want to make a candy corn pizza

If you share that candy corn pizza photo I will block and report you for spam, and also call the FBI and D.A.R.E. on you.

Even DiGiorno Pizza got in on the fun, sounding off their own opinion on the pie, with a brutal ‘Tis the no,’ to which @Asswolf cheekily replied, “If y’all want the recipe, I’m giving it away for free.” (DiGiorno passed.)

A word of caution, however: As its creator noted, the dessert-pie is to be eaten sparingly, should you dare attempt your own version.

“I ate three pieces and became slightly ill from the sugar,” he admitted.

I ate 3 pieces and became slightly I'll from the sugar

Thanks for the tip — duly noted!

What’s your stance on candy corn pizza? Tell us over @BritandCo.

Nicole Briese
Nicole is the weekend editor for Brit + Co who loves bringing you all the latest buzz. When she's not busy typing away into the wee hours, you can usually find her canoodling with her fur babies, rooting around in a bookstore, or rocking out at a concert of some sort (Guns N' Roses forever!). Check out all her latest musings and past work at nicolebjean.com.
Food Trends
Food News
Food Trends Halloween social media twitter
The Conversation
Reviews:
More From Food News