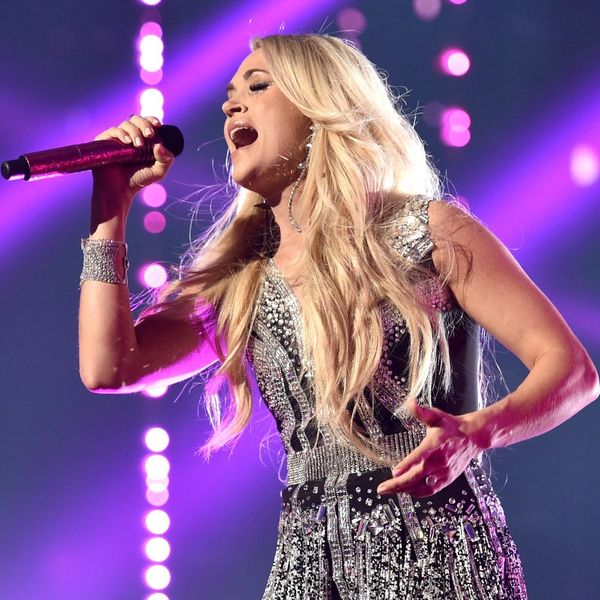 Carrie Underwood made a triumphant return to the stage at the 2018 ACM Awards on Sunday, April 15, performing in public for the first time since a fall at her home left her badly injured last November. The American Idol alum sang her brand-new single, “Cry Pretty,” and we are still cheering.

Underwood looked as stunning as ever in a silver beaded minidress, with glittery tears painted under her eyes — and she sounded even better. She had the crowd on their feet almost immediately, and they remained on their feet long after she was done, giving her a (well-deserved) standing ovation.

Underwood looked emotional as she took it all in, and she was still recovering when she returned to the stage a few minutes later with Keith Urban to accept the award for Vocal Event of the Year for “The Fighter.”

“Thank you for having me,” she told Urban. “I’m still kind of, like, shaky right now. Thank you, guys, thank you, country radio. And the fans, oh my gosh!”

Underwood had been keeping a low profile since her accident, which left her with a broken wrist that required surgery and a facial injury that needed 40 to 50 stitches. At the time of the fall, she told fans she might “look a bit different” when they saw her next.

Earlier this month, though, she seemed more positive about her recovery, writing in a blog post on her website that she was feeling “pretty darn good” these days.

“My wrist is almost back to normal, about 90 percent there, and the docs say that last 10 percent will come in time,” she wrote. “And my face has been healing pretty nicely as well. I definitely feel more like myself than I have in a while.”

What did you think of Carrie Underwood’s ACM Awards performance? Tell us @BritandCo!