7 Comedians to Watch If You Loved Hannah Gadsby’s ‘Nanette’ 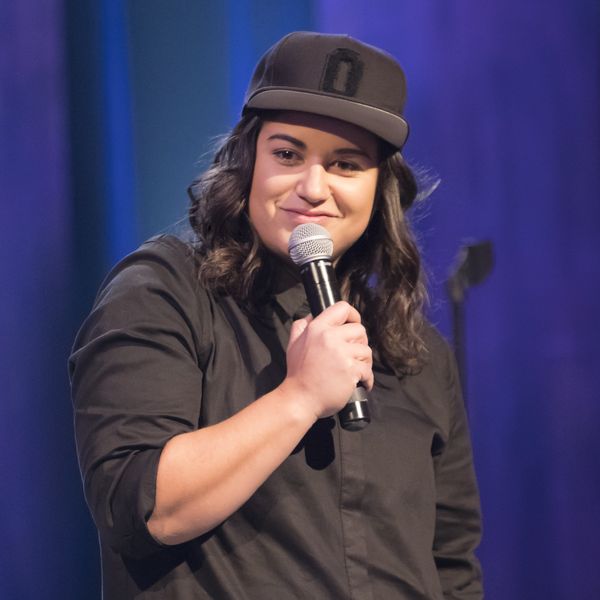 If you've paid attention to pop culture at all in the last few weeks, chances are you've heard of, and very likely seen, comedian Hannah Gadsby's Netflix special, Nanette. The standup set appeared on the streaming service in June with little to no fanfare but has caught on like wildfire since. Its biting social commentary on the ongoing marginalization of the LGBTQ+ community and its pivot from standard punchlines to painful, personal storytelling is being lauded as a new frontier in modern standup. Of course, Gadsby isn't the only comedian offering additional representation of the LGBTQ+ perspective or skewering the societal expectations on women. Here are seven other people and specials you might want to check out if you loved Nanette. (Photos via Scott Dudelson/Getty Images + Netflix/Jackson Davis + Netflix)
Cameron Esposito: Cameron Esposito realized she was gay at age 20, and much of her work has dealt with not only her sexuality but also the fight for equal rights. In her latest comedy special, Rape Jokes, her approach is not dissimilar from Gadsby's, as she talks seriously about sexual assault from her own perspective as a survivor and digs into the comedy culture that has made joking about it far too easy. The special is available for free or donation on her website, with all proceeds going to RAINN, the United States' largest anti-sexual violence organization. (Photo via Scott Dudelson/Getty Images)
Tig Notaro: Although she became a mainstream name with her stunning cancer standup special in 2012, Notaro further cemented her comedic status with her second Netflix special, Happy to Be Here, released earlier this year, as well as her partially biographical One Mississippi series. She'll continue shaping a representative film and TV landscape when she plays the wife of America's first female president (Jennifer Aniston) in First Ladies, which Notaro co-wrote with her IRL wife Stephanie Allynne. It's set to debut on Netflix in 2019. (Photo via Netflix)
Sam Jay: Charismatic and confident standup comic Sam Jay recently made a move to the writers' room of Saturday Night Live, where she's been trying to bring "urban culture stuff, gay culture stuff, [and] women stuff" to the live TV comedy institution. Her most recent standup set can be seen on Netflix's new Comedy Lineup, a series of bite-sized 15-minute sets from a diverse array of comedians. (Photo via Netflix/Jackson Davis)
Michelle Wolf: It's been a banner year for Daily Show contributor and former Late Night With Seth Meyers writer Michelle Wolf. The comedian released her first HBO special, Nice Lady, in December, sparked a controversy with her incendiary White House Correspondents' Dinner speech in April, and launched her own Netflix series in May. On The Break With Michelle Wolf, she makes fun of everyone and everything. She doesn't play nice, and she's not sorry for it. (Photo via Cara Howe/Netflix)
Ali Wong: When Ali Wong's standup special Baby Cobra debuted on Netflix on Mother's Day in 2016, it won the very funny, very filthy-mouthed — and, at the time, very pregnant — Wong legions of fans. Her biting commentary on gender roles has kept her in the public eye ever since, and her latest special, Hard Knock Wife, continues to squash society's expectations of new moms, calling out the ridiculous pressures and double standards they face. (Photo via Netflix/Ken Woroner)
Gina Yashere: After building a solid comedy career in the UK, Yashere moved stateside, where she filmed specials for Showtime and NBC's now-defunct comedy streaming service Seeso before becoming The Daily Show's hilarious British correspondent. Her distinctive perspective on racism, Hollywood, and more issues shines on her episode of season 2 of Netflix's The Standups, released in March. (Photo via Netflix/Saeed Adyani)
Sabrina Jalees: LA-based Canadian comedian Sabrina Jalees has never shied away from personal material, and her new set on Netflix's Comedy Lineup touches on the devastating effects of coming out to her extended Muslim family, the #MeToo movement, and more. (Photo via Netflix/Jackson Davis)
Nicole Villeneuve
Nicole is an entertainment and lifestyle writer covering pop culture, news, and cool women doing cool things. She likes yard sales, MTV's Teen Mom, and putting too many memes in the group chat. She lives in Toronto.
Netflix
Pop Culture
Netflix