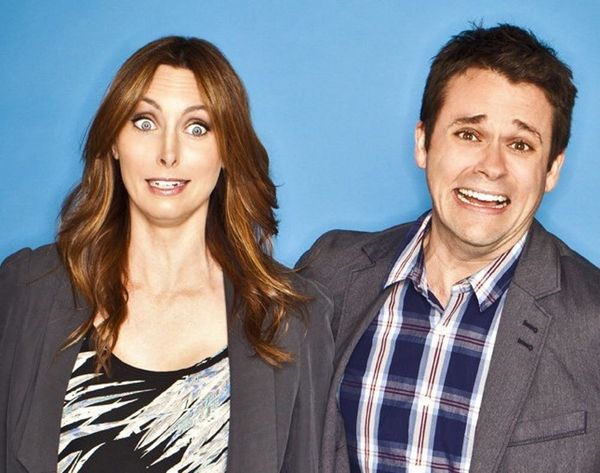 There’s nothing we love more than cracking up over Jimmy Fallon’s lip sync battles or chuckling over comedy memoirs, like Amy Poehler’s hilarious Yes Please. Thanks to the magic of podcasts, we can LOL to our favorite comedians whenever we please. If you’re looking for even more giggles, we’re sharing our 16 fave comedy podcasts that will make you laugh so hard, you’ll cry. We promise.

1. Slumber Party With Alie & Georgia: Who could say no to an adult slumber party full of wine spritzers and ghost stories? Co-hosts Alie and Georgia, the ladies of the Cooking Channel’s Tripping Out With Alie & Georgia, broadcast their podcast straight from their pillow fort. Put on your favorite PJs, pour yourself a glass of wine and listen to their views on chick lit. As an added plus, Food Network stars like Giada De Laurentiis often stop by.

2. Throwing Shade: If you’re looking for a bit more depth to your comedy podcast, comedians Erin Gibson and Bryan Safi have you covered. Whether they’re riffing on women’s rights, LGBT issues, culture or politics, they’re putting their trademark witty spin on it.

3. I Seem Fun: While we’d never let anyone read our diaries, we’re grateful that comedian Jen Kirkman, an alumna of Chelsea Lately, is broadcasting hers. Tune in to her show for a peek at Jen’s absurd daily life of Kardashian holiday specials, inability to read emails and old ladies with coats.

4. Wait Wait… Don’t Tell Me!: If you’re a news and trivia junkie, you’ll love actor Peter Sagal’s weekly quiz program. Follow along as a panel of comedians, journalists and entertainment figures compete in games like “Who’s Bill This Time?” and “Not My Job,” and you’ll be laughing for days. Test your funny bone out against Daniel Radcliffe, Luke Burbank, Kyrie O’Connor and Alonzo Bodden.

5. If I Were You Show: Jake and Amir, CollegeHumor’s hilariously immature duo, offer advice where they definitely shouldn’t. Listen to their take on how to lie forever and their thoughts on ex-girlfriends. While we’d never take their advice, we’re always LOLing after hearing their crazy suggestions.

6. Pop My Culture: Hosted by comedic actors and improvisers, Pop My Culture is a conversation that spans everything pop culture-related. Rated the #2 best comedy podcast of the moment by Rolling Stone, we suggest starting with their summer movies episode, where the hosts are joined by special guest Patton Oswalt.

7. The Talk Of Shame: College Humor’s Streeter Sidell brings guests to the show to discuss their most embarrassing stories. Think you’ve got a cringeworthy tale? Submit it to Streeter and a person with a British accent will read it aloud. Seriously.

8. WTF with Marc Maron: Often hailed as the father of podcast comedy, Marc Maron welcomes actors and comedians to his garage. Yup, his garage. Celeb guests like John Mulaney, Lena Dunham and James Franco regularly stop by his show to talk about life and its WTF moments.

9. The Bugle: Former Daily Show’s John Oliver and British comedian Andy Zaltzman explore the world of satirical news and promise to leave “no hot political potato unbuttered.” If you like your comedy with a dose of real world news, then you’ll love these two comedians. Start with their takes on ebola and life expectancy, but don’t blame us if you’re still listening (and giggling) five hours later!

10. Comedy Bang! Bang!: A jack of all trades, this program is more than just a podcast — it’s also a TV show, stand-up showcase and live tour. The funniest of the funny, like Jon Hamm, Andy Samberg and Seth Rogen, play improv-style games and impersonate other celebrities.

11. Thrilling Adventure Hour: Performed in the style of old-time radio, Thrilling Adventure Hour stars comedians and writers who perform in front of a live audience.The podcast features the funniest sections of the show and one-off sketches. Everyone from Neil Patrick Harris to Alison Brie stops by to create an hour of pure comedy gold.

12. How Did This Get Made?: You know those movies that are so bad, they’re good? Jason Mantzoukas joins comedy couple Paul Scheer and June Diane Raphael to chat about some of Hollywood’s biggest stinkers, like Mariah Carey’s Glitter. They accept movie suggestions, so if you’ve seen a terrible movie recently, it could be the subject of their next episode.

13. You Made It Weird: Comedian Pete Holmes steps up to the plate to ask celebrities those nosy questions we’re too scared to ask them. From religion to sexuality, Pete Holmes leaves no hilarious stone unturned. We’d recommend starting with Pete and actor Ray Romano.

14. Girl on Guy: Ever feel like one of the guys? So does actress Aisha Tyler. Her podcast promises to share “stuff guys love, brought to you by the ultimate guy’s girl.” Sit in on House of Card’sCorey Stoll while he chats about Comic Con or listen to Glee’sJenna Ushkowitz share her love for charity events and booze.

15. Judge John Hodgman: Author and comedian John Hodgman takes on the role of a judge as he tackles major issues, like whether a couple’s trailer should be turned into a food truck or camper or or if you should let your dog ride in the front seat of your car. Get his goofy verdicts here.

16. Go Bayside!: If you’re a Saved by the Bell fan and you haven’t heard of this podcast yet, where have you been? April Richardson, a Chelsea Lately alumna, invites a fellow comedian to watch and break down a Saved By the Bell episode. Listen to her chat about the “Class Rings” episode with comedian Paul F. Tompkins or tune in for her take on “Screech’s Birthday” with Cupcake Wars host Justin Willman.

Did we miss one of your favorites? Which podcasts make you laugh out loud? Let us know in the comments below!

Nicole Mangona
During the day, Nicole makes authors' dreams come true through her work at a publishing house. At night, she can be found sweating through a Blogilates video or delving into another Agatha Christie novel. Her work is an accurate representation of herself: creative, genuine, and purposeful.
Kardashians
Tech
Kardashians Podcasts