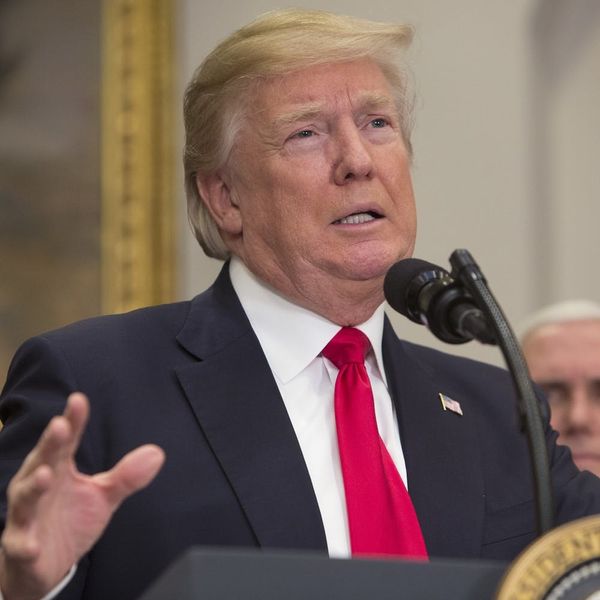 As the week goes on, more possible mail bombs are being intercepted en route to addresses associated with Trump critics, Democrats, and CNN, including to actor Robert De Niro and former vice president Joe Biden on Thursday. This brings the total potential targets up to six prominent Democrats, one actor, one liberal philanthropist, and CNN headquarters.

While the bombs have been rudimentary, and none have caused any harm, CNN reports that experts believe the sender’s intent was to wreak fear and havoc, not necessarily to hurt anyone. President Donald Trump, meanwhile, has tweeted that he believes the so-called fake news is to blame for the entire threat, ignoring the people who could be hurt as collateral damage for the sake of making his own political point.

“A very big part of the Anger we see today in our society is caused by the purposely false and inaccurate reporting of the Mainstream Media that I refer to as Fake News,” Trump tweeted early Thursday morning. “It has gotten so bad and hateful that it is beyond description. Mainstream Media must clean up its act, FAST!”

The president’s message, although extremely on brand for the partisan viewpoints he shares, ignores the people across the country — Democrats and Republicans alike — who have felt unsafe in their jobs this week because they’ve been made into unwitting potential casualties for a political scare tactic. And more than the threat of false news stories, ignoring the people on the front lines may help further sow seeds of animosity and distrust in the very institutions that are meant to uphold democracy in the country. That’s no good for any political party.

In both New York and California, suspected packages were delivered to buildings with hundreds of workers. The devices were found in, or in transit to, mail rooms where staff could have been hurt or killed. In New York City around the CNN building in central Manhattan, the safety perimeter got bigger and bigger, wreaking havoc for commuters and people in the area trying to get to and from work.

In California, the package sent to Senator Kamala Harris’ office could have hurt people at several businesses operating out of the same building, including the San Diego Union-Tribune. The potential for catastrophe in the confusion was probably greater than the actual bombs themselves, but ignoring the thousands of people at each scene, and the millions watching yesterday’s events unfold, shows that, at least right now, the desire to push a political agenda is more top of mind than the safety of Americans of all political stripes.

While pundits and politicians on both sides of the political divide argue about the nature of and intent of these devices, it’s important that we collectively work together to create safe spaces, to protect each other, and not be deterred by fear. With midterms less than two weeks away, we may feel hopeless or afraid to even vote.

But that’s the point of terror plots: to immobilize citizens and keep us all from going about our daily lives for fear of retribution. And the lack of concern for the potential victims — all of whom are political opponents the president has publicly attacked with growing fervor in recent months — plays right into the hands of whoever has decided that terror is the only answer.

While we may see a call for greater unity in the face of these threats, it’s important that we also tune out the partisan arguments that go alongside these messages. Because we’ll only get through events like this if we focus on each other and stop throwing blame.

If our leaders can’t do that for us, we’ll do it for each other. That’s the American way.