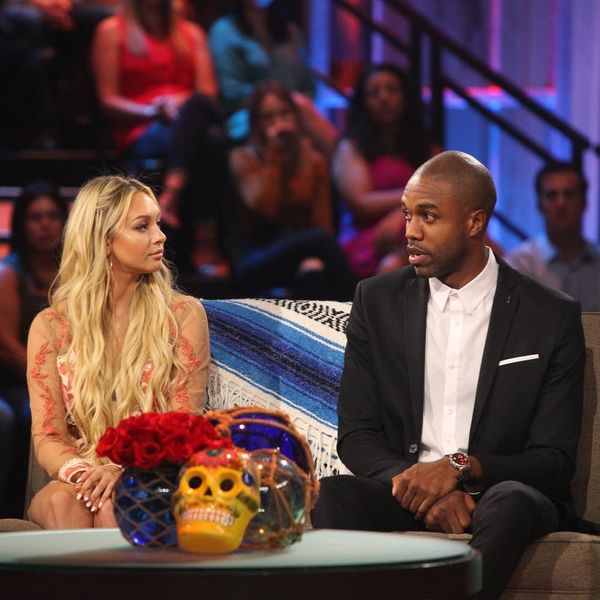 We can never really predict where we’re going to see Corinne Olympios and DeMario Jackson next. The two reality stars, who were involved in the season four Bachelor in Paradise scandal that shut down production this summer, have remained friendly since they had their say about the situation in separate interviews with Chris Harrison. And this week, they took their friendship to Disneyland.

Enjoying a day at the happiest place on Earth, Olympios, Jackson, and a few other pals let loose and took full advantage of the park’s many rides and attractions. After traveling the globe on “It’s a Small World,” they then jumped onto something a little more hair-raising, which Jackson shared via his Instagram stories.

TMZ also had pics of the two holding hands while walking through the park, which sparked some speculation among Bachelor Nation fans about a possible romance. But Olympios was quick to shut that down, first on social media and then in a chat with Entertainment Tonight.

“DeMario and I are close friends. We are not dating. We were hanging out with a group at Disneyland, and I have no problem holding hands with any of my friends,” she told ET. “Since things with Bachelor in Paradise wound down, DeMario and I talk almost every day. We both know neither of us made the complaint that started everything, so why wouldn’t we be friends? We’ve been able to move forward and he’s like a brother to me.”

This isn’t the first time these two have been spotted out together recently. The BiP pair also enjoyed a dinner date last week at TAO restaurant in Hollywood.

What do you think about Corinne Olympios and DeMario Jackson’s friendship? Let us know @BritandCo!