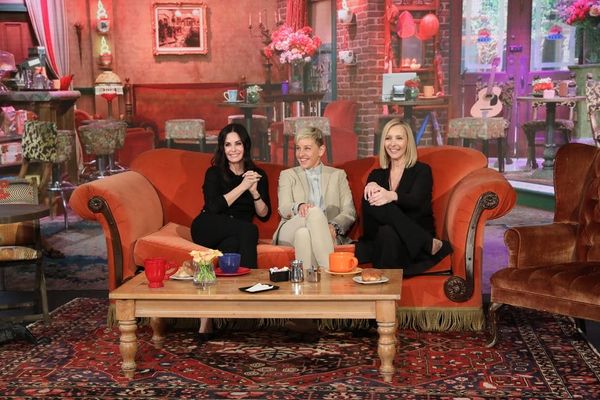 Lisa Kudrow and Courteney Cox are still there for each other! The Friends costars had a surprise mini reunion on The Ellen DeGeneres Show that’ll leave you feeling so nostalgic for the ’90s.

Cox appeared as a guest on the Tuesday, January 29, episode of Ellen to promote her new Facebook series, Nine Months With Courteney Cox. As the actress revealed that she was finally ready to join Instagram in order to better connect with viewers, DeGeneres led her to a set that had been made to look like a replica of the Central Perk coffee house from Friends.

Cox and DeGeneres cozied up on the famous orange velvet couch, laughing and pretending to drink from giant mugs as they posed for an Instagram pic. Cox, who played Monica on the hit NBC sitcom, even jokingly called out for Gunther to bring them more coffee.

“I wish Lisa Kudrow was here because that would be fun,” DeGeneres said — and, naturally, Kudrow appeared and joined the women on the couch as the shocked studio audience cheered excitedly.

“I wanted to be there for you, get it?” Kudrow joked, referring to the lyrics of the famous Rembrandts theme song. Cox, laughing, let out an affirmative, “I know!” in the style of Monica.

DeGeneres also commented that she wished Kudrow — who played Phoebe Buffay — had brought her guitar, to which Kudrow joked, “But who would play it?”

Watch the entire adorable video above.

What did you think of the mini Friends reunion? Let us know @BritandCo!