6 Gadgets You Didn’t Know Your Next Camping Trip Needed 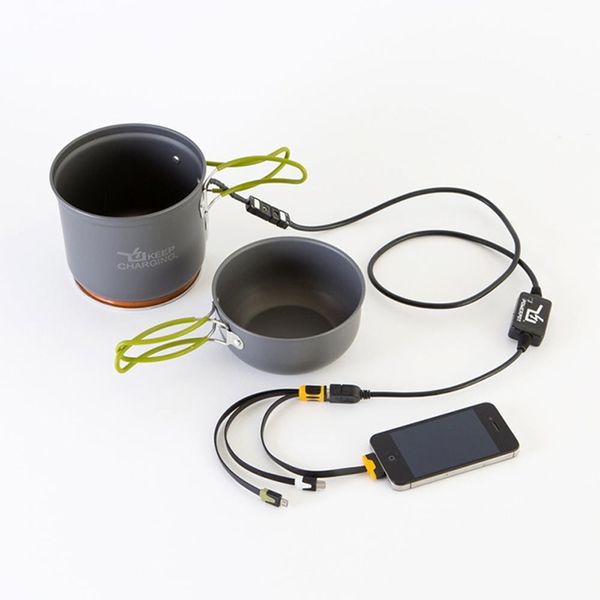 Winter is *finally* over. And while some of us eagerly plan outdoor summer parties and barbecues, the rest of us like to think about our next camping adventure. Luckily, in 2015, going camping doesn’t have to involve hunting or totally roughing it (unless you’re into that). Technology can make just about any activity simpler, and camping is no exception. Whether you’re a camping veteran or are new to the fun, these six awesome tech-powered tools will make your camping trip loads of fun.

1. Black Handpresso Wild Hybrid ($148): Just because you’re going camping doesn’t mean you can’t have your coffee fix. The Handpresso is a portable coffee machine for those camp mornings that feel perfect for a long hike. All you need to do is add your favorite coffee, some hot water and press a button, and voila! Fresh coffee in your thermos.

2. PowerPot V ($150): With the PowerPot V you can quickly boil water or cook up a fresh meal under the stars. All you need to get a nice flame going are a few twigs and sticks. Did we mention that you can also charge your phone with this stove?!

3. SOLAR:3 – Solar Charger With SunTrack Technology ($50): Charging your phone next to boiling water may not be the best idea. That’s where the SOLAR:3 shines. This super portable solar charger features a three-watt solar panel that not only charges your phone, but also your e-reader, tablet and GPS device within just five hours.

4. Goal Zero Switch 10 Multi-Tool Kit ($120): This kit is solar-powered, so it can easily be used to charge your devices. But what we really love about this gadget is that it works as a much-needed flashlight for nighttime treks in the woods. It also acts as a handy fan to cool you off during those hot summer days.

5. Fogo (Not yet released, but sign up to pre-order): Described by its creators as a “digital Swiss army knife,” the Fogo is equipped with GPS, a walkie talkie, a flashlight and apps. The designers of Fogo also provide a software development kit to allow any developer to create third-party apps, making it even more useful, customizable and amazing than it already is.

6. Nyne Adventure Series Speakers (starting at $120): Another up-and-comer to keep an eye out for this year is Nyne’s line of portable speakers made for a party of outdoor proportions. Yes, this might be more for glamping than straight up camping, but can you imagine the epic bonfire dance party you can have with these adventure-ready bad boys?!

What are some cool gadgets you plan to take with you on your camping trips this year? Let us know in the comments!

Amélie Lamont
Amélie wants to live in a world where entrepreneurs are boldly changing the world and people break out in song (Glee-style) for fun. She combines over 10 years of experience in design, customer service and startups into her current work as a brand consultant, designer, and user researcher. When she’s not designing beautiful brands, you can find her coding for fun, practicing dance moves in her living room, and trying to understand why the meaning of life and everything as we know it is 42. You can find her in her perfect slice of the Internet at www.amelielamont.com.
Camping
Tech
Camping