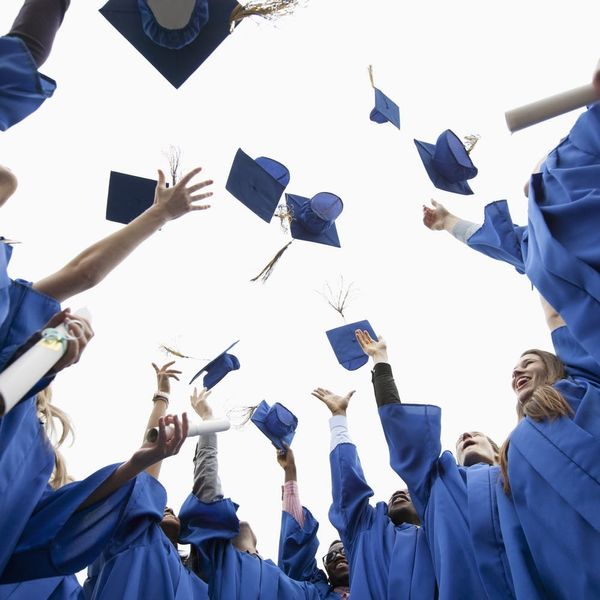 We’ve all been to enough graduations to know that they’re pretty much all the same. Ceremonies are usually filled with caps and gowns, photos, applause, and speeches. Key word: usually. Here are a few schools’ crazy-creative traditions that will probably have you wishing you went there so you could celebrate in all the graduation fun. Scroll below to learn about them all.

This all-women’s college tradition was originally held on May Day, but it’s now held in April. The purpose was to allow students to essentially leave all their worries behind and just partake in some fun and games outdoors. Back in the day, it was said that the winner of the hooprolling race was the first to be married, and in the 1980s she would the first to be CEO. Nowadays, she’s the first to achieve her own happiness… that is, after being thrown into Lake Waban by all her classmates.

You fashionistas will love this one. During December commencement, women wear black dresses and men wear black tuxedos. During May commencement, women wear white dresses and the men wear summer tuxedos. It’s also been tradition since the 1930s to carry flowers onto the stage: Women carry bouquets of six red roses in a red bow and men wear a single red rose boutonnière. So classy!

This tradition started back in 1911. It was originally referred to as the “Great Ring” and then the “Magic Circle.” Basically what happens is, the graduates won’t receive their diplomas when they walk the stage. Instead, the diplomas are passed around until everyone receives their own. Sounds like a lot of fun to us.

Williams College began this tradition back in 1913. A watch is dropped from an 80-foot spire, and if the watch breaks, the class will be considered “lucky.” Think it’s for real? Only time will tell.

One of Colgate University’s oldest traditions, the torchlight walk is something the entire senior class participates in. At the end, students throw their torch in the fire pit and then enjoy some pizza and fun.

The famous Hoover Tower Carillon is played during each commencement here and can be heard throughout the entire campus. It’s like one long concert of graduation bells.

You’ll absolutely love this tradition. UNH’s vendor provides wrinkle-resistant caps and gowns made of recycled plastic bottles. Graduates then have the opportunity to donate their gowns to be cleaned and reused. Graduates are still able to keep their caps and tassels as keepsakes, all while helping to save the environment.

Wearing a lei during graduation is a flowery, fun tradition at CSU Bakersfield. Graduation Day Flowers sells leis and bouquets as a fundraiser for the university. Sounds like a definite win-win!

This is such an adorable idea. Students wave a symbol of the school or department from which they got their degree. (For example, blow-up hammers represent the school of engineering.) It’s definitely a nice change from the usual walk to your seat and wait for your name to be called… although there really is no getting away from that.

Get ready for battle. To unleash unexpended energy at the end of the semester, students gather on both sides of the campus’ main street with (school approved) foam sabers. At the signal, they charge at each other with their fierce, foam-filled weapons, only to quietly disperse moments later. For those passing by, this random scene is entertaining to say the least.
Marwa Diaf
Marwa is a freelance writer and modest style blogger behind Live Write Style. She attained her Bachelor's in Journalism from CSU Sacramento in 2012. She considers herself a Starbucks-addict, which means she can't go a day without her iced white mocha.
Graduation
Party
Graduation