Creative Relationship Advice from Creatives: An Aerial Dancer + Musician Who Make It Work 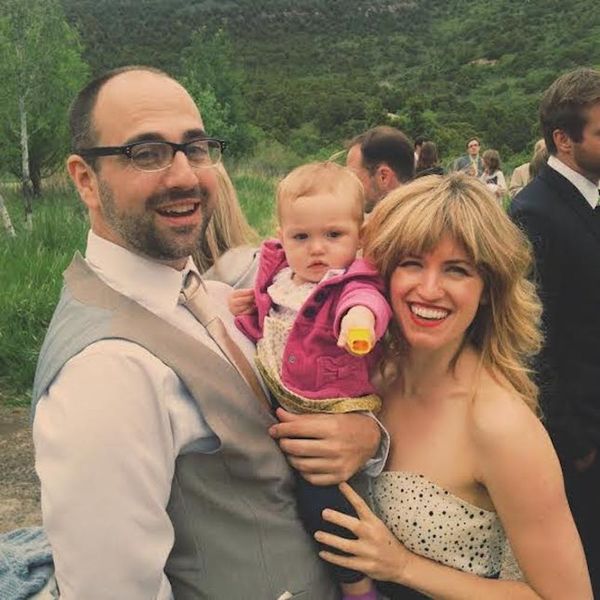 When it comes to love, everyone’s got a theory about what makes relationships work. Some say opposites attract, some say it’s all about timing. However you slice it, there’s just something amazing that happens when two creative souls meet and fall head over heels for one another. Such is the case of Tolly Moseley and Ross Carnes, two kind-hearted, industrious Texans who are making their living in the arts — and an impact on the lives of others too — as they raise their young daughter Nico in the warm, weird city of Austin. Scroll on to meet the first couple in our new Creative Mates series, which features crafty duos doing interesting things worth talking about (and swooning over too).

For her part, Tolly is the definition of a multi-hyphenate, engaging in three separate creative endeavors that come together to form a layered creative career. A freelance writer whose work has appeared in The Atlantic, Salon and other high-profile culture outlets, she also spends her time as the co-host of a popular podcast called Statesman Shots and is the co-founder of an aerial dance troupe appropriately called Rapt Aerial Dance. Ross keeps the beat with his own music studio, We Love Music, where he works primarily with kids, teaching open-ended, child-centered individual and group lessons in a literal school of rock. As if that weren’t awesome enough on its own, he’s also a woodworker on the side.

How These Creatives Date

The couple, who has been together for 11 years and married for eight, don’t confine their creativity to their careers. In fact, it tends to creep into their date nights as well, and even their vacations are filled with unconventional adventures.

“On our honeymoon in Puerto Vallarta, Mexico, we took a drive out to the jungle to see the place where the Arnold Schwarzenegger movie Predator was filmed,” Ross says. “I’m not sure why we went there as a date on our honeymoon. I really love that movie, but visiting the set of a film about being hunted down in the jungle by an invisible alien that keeps killing your friends is not the most intuitive choice for a romantic getaway. Even so, it turned out to be quite magical! There’s this charming little restaurant alongside a waterfall, tucked away in the pristine jungle. It’s the perfect place to have lunch, swim and fall in love with each other while a grotesque monster glares down on the whole scene from the roof of a mangled helicopter.”

When it comes to dates back home, Tolly recalls a particularly memorable night out. “We once went to a show in Austin called ‘The Acro-Cats,’ which is a touring company of house cats who do tricks!” she says. “At the end of the show, they form a band called ‘The Rock Cats’ and play instruments. This is real, look it up,” she adds.

How These Creatives Work

On the professional front, while their ventures remain separate, the couple say they keep each other motivated just by doing what they love in close proximity to one another.

“I think we each are so engrossed in what we do in our respective careers that we get extra motivated when we occasionally get to stop what we’re doing and see what the other has been up to,” Ross says. “Sometimes it happens really naturally though. There have been many occasions when I’ve been teaching a private drum set lesson in my studio with my student seated at the drums next to a large window that looks into our backyard. There’s a tree back there with an aerial silk hanging from it. On certain days, I’ll be facing the student and see Tolly through the window behind them, elegantly twirling in midair as our toddler sits on a blanket nearby, playing with her stuffed animals. Those are definitely the moments when I really have to stop for a moment and just be grateful for what we have.”

When asked what she admires most about Ross’s career, Tolly says, “What I love about Ross and what he does for a living is definitely the way he makes kids feel. His students leave the studio with enormous grins on their faces, and that’s because the way he teaches is so unique and special. He has a great sense of humor and makes kids laugh a lot, but most importantly, he tailors his lessons to what they are interested in and works from there. He makes kids feel like he cares about them and not just them ‘getting’ a piece of music. Because of that connection, he’s got a ton of students, and some that he’s been working with for over 10 years.”

When asked what he adores about the way Tolly rocks her career, Ross says, “What I love about what Tolly does for a living has more to do with who she is than anything else. Tolly treats everyone she meets with equal enthusiasm, interest and integrity. It never comes as a surprise for me that whenever she meets someone new, they both walk away feeling like they have just made a new great friend — and they have! Like I said, it doesn’t surprise me, but it surprises her! To be more direct, though, about the nuts and bolts of what makes her successful, she really works hard and is determined and methodical about meeting her goals. A few years ago, she set her sights on a few things: silks, being a freelance writer and starting a podcast. She is now simultaneously juggling all of those things, along with our 18 month-old, and coming out smelling like roses.”

How These Creatives Handle Competition

As for creative competition, both say there isn’t any. “Ross has no desire to dance on silks and I have no desire to play an instrument,” Tolly says. “He tried to teach me bass once, but it didn’t take. He’s also a woodworker and I’m also a writer, and there’s no crossover interest there, either. Even though I think Ross is a great writer.” Ross echoes: “On the professional end, we both work from home and have the power to choose who we work with, so in that way, we’re equal. Creatively, we both have multiple outlets, so it’s hard to get jealous.”

And as for the glue that keeps them together, Tolly says a big part of it is gratitude.

“Ross’s school has these twice-a-year rock recitals,” she explains. “They’re held at a local rock venue in Austin, with a stage, sound guy, lights, etc., and the kids look and feel totally legit up there. It’s amazing to see this whole community of families out there cheering for these kids, who are often playing original pieces they wrote themselves. My mom always comes to these shows too, and invariably leans over to me to say, ‘Can you believe that’s your husband?!’ to which I say, ‘No! I can’t believe it!’ And that’s the thing Ross and I say to each other every day, that we are so lucky to have the jobs we do, the baby we do, to have each other. I know that sounds so corny, bordering on barfy, but we’ve always felt like we’re two of the luckiest people on the planet. I hope we always do.”

Do you know any cool + crafty couples we should feature? Tweet us about them at @BritandCo and they might appear in a future Creative Mates column!

(Images via Tolly Moseley and We Love Music)

Amy Lynch
Amy is a freelance writer and editor, telling the stories of progressive people and projects that move the world forward. Her work has appeared on The Hairpin, Refinery29, Citygram and more, and she's developed content for the likes of Alternative Apparel, Milkshake and Silvercar. She lives, works and plays with her fiancé and their dog, Bogey, in the weird, wild heart of Austin, Texas.
Dating
Lifestyle
Dating Love
More From Lifestyle