Cynthia Nixon Weighs in on Medicare for All, Celebrities in Politics, and All That Miranda Hobbes Fandom 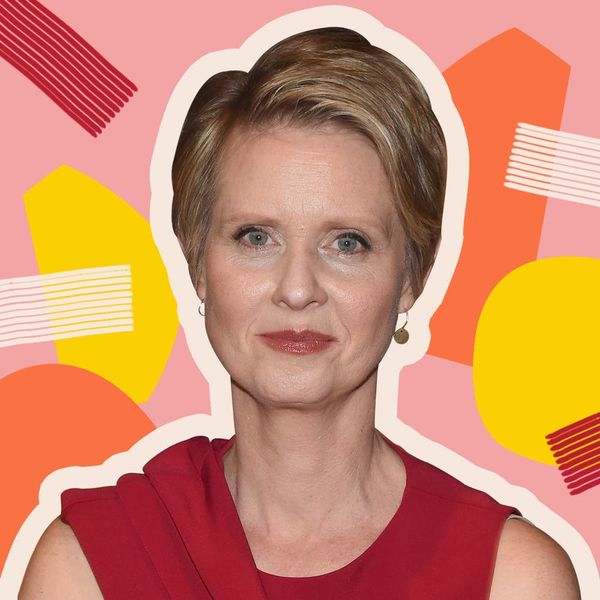 Carrie Bradshaw’s Sex and the City character hasn’t aged well. Sure, we still kind of love her anyway, but in 2018, we’re quick to call out her exorbitant spending habits and repeatedly questionable choices in men. Miranda Hobbes, on the other hand, has aged like fine wine. Often portrayed as the “Debbie Downer” of the group, she’s gradually evolved into a social media icon over the past 20 years. Now, there’s even an entire Instagram account dedicated to Hobbes’ wisdom and realistic embodiment of a successful working woman. Given her millennial hero status, it makes sense that when Cynthia Nixon (the actress who played Miranda Hobbes) announced her run for New York governor, the women of the internet went wild with celebration – most of them, anyway.

Nixon is not a real-life replica of her Sex and the City character, but admittedly she does embody many of the characteristics people seem to love about Miranda Hobbes. Nixon is a 52-year-old, native New Yorker who is outspoken, unapologetically progressive, and prepared to fight for what she believes in. That much has been proven over the past 17 years she’s spent advocating for public school funding, LGBTQ+ equality, and women’s health care.

Nixon’s been grinding on the campaign trail and the MTA rails since March, and now it’s showtime. With New York’s primary election taking place on Thursday, September 13, she’s about to see if the state is ready to stand behind her progressive platform. Ahead of the important election, we caught up with Nixon to talk about the issues she’ll fight for if she wins, how being raised by a single mother shaped her, and what she makes of all that Miranda Hobbes fandom.

B+C: What was the catalyst that made you decide this was the year to run for office?

Nixon: Like a lot of Americans – women, in particular – I was urged by Donald Trump’s presidency to get involved in politics in a way that I hadn’t before. New York should be fighting against Trump with everything we’ve got, but instead, our governor [Andrew Cuomo] has blocked a lot of progressive policies. Take healthcare, for example: While Trump and Paul Ryan were working to repeal Obamacare, we could have passed “Medicare for All” in New York. It’s already passed the Assembly four times but Cuomo refuses to get behind it. This bill would eliminate co-pays, deductibles, and premiums and provide all New Yorkers with free, guaranteed healthcare.

B+C: How do you think your years of activism work has prepared you for a more formal role in politics?

Nixon: Elected officials, more often than not, really look down on advocates and activism as a form of “experience.” Remember the reaction when Obama talked about being a community organizer? That’s so out of touch. All my years in advocacy and activism taught me that organizers are closest to the people. It showed me that elected officials need to be much, much closer. You can’t represent people if you’re not talking to them. Cuomo hasn’t ridden the subways in 20 months and look at the state of our subways.

B+C: You’ve been very vocal about being raised by a single mother in New York City. How has that experience influenced the issues you’re fighting for today?

Nixon: My mother taught me that if something is wrong, you have to stand up and speak out. She also taught me how to fight for your kids. My dad was very troubled, and my mom said if it wasn’t for me, she just wouldn’t have left [him]. But she saw the effect he was having on me, so she found the strength in herself to tell him to go. After that, we moved to a five-floor walk-up. After a while, my mom realized the landlord was cheating us. She stood up for herself and got our rent reduced, and got it reduced retroactively. I remember so clearly how proud she was of herself, and how proud I was of her. She taught me to fight and to fight even harder for your kids.

So, 17 years ago, when the city was cutting public school funding, I stood up. My oldest had just started kindergarten and I saw the horrible impact these cuts were having at his and all the other schools around the city. I started protesting with parents and lobbying legislators and we stopped hundreds of millions of dollars in additional cuts. In the process, we learned the issue was really statewide, so the very next year, I joined the Alliance for Quality of Education (AQE). I’ve spent the last 17 years traveling around the state and meeting with legislators to fight for a funding solution that would close the dramatic funding gap between low-income and high-income school districts. We ultimately won a victory in the courts to close that $10,000 per pupil gap, but Governor Cuomo has refused to honor the ruling.

B+C: Fixing New York City’s subways and legalizing marijuana are two issues you’ve been extremely vocal about. Aside from those, what are some of the issues you’d want to tackle right away if elected?

Nixon: “Medicare for All” is a big one. It would reduce health care costs for 98 percent of New Yorkers. It would eliminate deductibles, co-pays, and premiums. It would allow people to take care of their health proactively [see the video on this].

I’d also fully fund our public schools. The courts ruled that low-income school districts are owed billions from the state, but Andrew Cuomo has refused to honor it. I will make sure our children get the sound basic education they’re entitled to.

B+C: Since Trump was elected, there’s been a lot of conversation — and, frankly, trepidation — about voting another celebrity into office. What do you say to those who are wary of electing another celebrity over a seasoned politician? What advantage do you think coming from a non-political background (professionally speaking) gives you?

Nixon: Trump and I have nothing in common. He was a real estate developer who inherited his business from his father and used his celebrity to enrich himself further. I was raised by a single mom. I started acting at age 12 because there was no other way to afford college. I’m also not a political novice. I’ve been fighting for public education, LGBT rights and reproductive rights for decades. I helped vote out three state senators opposed to marriage equality, and put the fear of God in a lot more. Working with other parents and public education advocates, I forestalled hundreds of millions in budget cuts to New York City schools, and I helped win billions of dollars more on the state level.

I do think there is a value in voting in someone who isn’t part of the entrenched political class. I’m not taking a single dime of corporate donations, so the only donors I’ll be beholden to are everyday New Yorkers.

B+C: You’re running on a progressive platform and you’ve often criticized Governor Cuomo for his more centrist tendencies. In a time when there is so much party division, do you think it’s important to find middle ground with Republicans on some issues? Are you willing to reach across the aisle if elected?

Nixon: I’m not automatically going to be opposed to an idea because a Republican presents it. If the policy they’re proposing helps attack inequality, of course, I’ll look at it seriously.

B+C: Over recent years, your Sex and the City character Miranda Hobbes has become something of a pop culture icon, especially on Instagram. What do you make of the campaign support that’s funneling through the Miranda Hobbes fandom?

Nixon: At the time the show aired, Miranda was often seen as the least “fun” of the four main characters. I’m glad that women are now embracing a character who is so career driven, who doesn’t apologize for her success.

B+C: How can people support your campaign?

Nixon: Donate, volunteer, or vote! Can find out how to do all of the above on my website.

Cortney Clift
Cortney is the senior writer and special projects editor at Brit + Co. She typically covers topics related to women's issues, politics, and lifestyle. When she's not buried behind her computer you'll find her exploring New York City or planning her next big adventure.
Women Who Run
Politics
Women Who Run