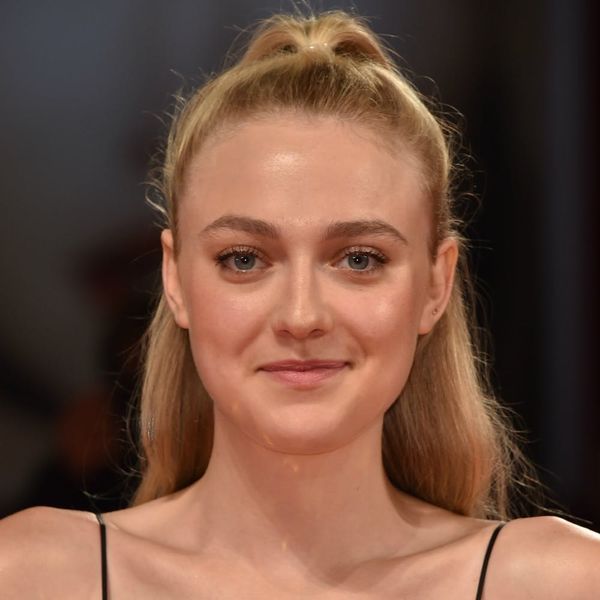 While celebs like Katy Perry and Cara Delevingne were rocking rainbow styles at Burning Man, Dakota Fanning (who has been giving us serious style inspo as of late with her rose gold sunnies) was busy slaying the red carpet at the Venice Film Festival in a sequined Miu Miu number that was fit for a mermaid.

On hand to promote her new film, Brimstone, all eyes were on the starlet as she swept down the carpet in the light blue holographic sequined gown, and we can’t say we blame them!

The dress was so gorgeous, in fact, that Dakota herself couldn’t keep her hands off it.

In an Instagram video we can’t quite seem to quit, she runs her hand over the gown’s iridescent scales, captivating us with their shining light. “Strokin’ the tail,” she wrote, along with a nod to her seriously gorge @neillanejewelry rings.

I became one with the dress. #mermaid

By the end of the night, it was clear the she had adapted to her new under-the-sea-themed life (cell phone included): “I became one with the dress. #mermaid.”

Shine on, Dakota. Shine on.

Are you a fan of Dakota’s ocean-inspired look? Tell us over @BritandCo!

Nicole Briese
Nicole is the weekend editor for Brit + Co who loves bringing you all the latest buzz. When she's not busy typing away into the wee hours, you can usually find her canoodling with her fur babies, rooting around in a bookstore, or rocking out at a concert of some sort (Guns N' Roses forever!). Check out all her latest musings and past work at nicolebjean.com.
Celebrity Style
Style News
Celebrity Style Red Carpet