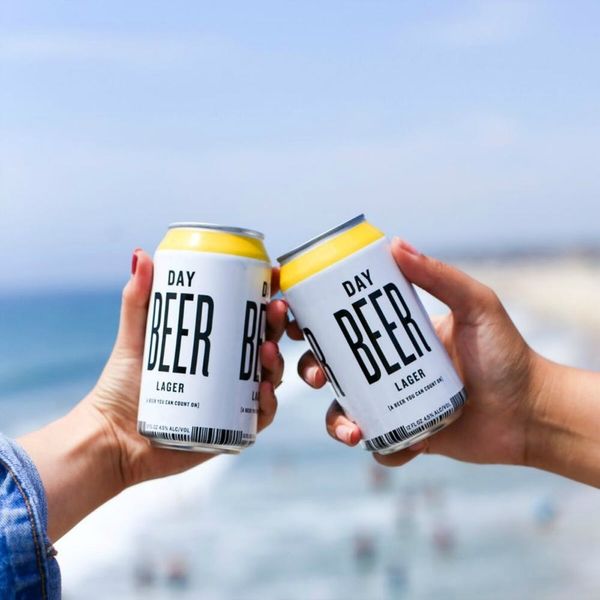 Day drinking happens — especially at brunch and holiday gatherings. Although we love it in theory, day drinking would be *so* much better if we didn’t have to worry about that wall we hit around dinnertime, thanks to that accidental buzz. And when we throw girls’ night in, it’s all fine and dandy until everyone starts to doze off during the movie. Enter: Day Beer. With a lower alcohol content than most other beers, 24 Hour Beer is bringing us a light and refreshing brew that won’t send your afternoon or evening down the drain.

inspired by that busy california lifestyle

Is there anything more energetic than that CA vibe? We didn’t think so. Which is why it makes sense that 24 Hour Beer would release a craft brew straight out of LA for beer lovers who are always on the go. Some ales, albeit delicious, just aren’t meant for *every* occasion. It’s hard to sip a dark stout in the sun, and not every palate is open to those hop-heavy IPAs. This crisp beer, at 4.5 percent ABV, is the perfect sipper for any and all occasions whether you’re off to a cookout, music festival, brunch party, or laid-back girls’ night, rec room-style.

Music Executives Daron Hollowell, Brent Nichols, and Kelcie Jadkowsi of Ring the Alarm, who’ve worked with artists like Kanye and MIA, founded 24 Hour Beer with a mission to create an approachable lager for beer drinkers who can’t find their way in the sometimes daunting craft beer world. But that doesn’t mean this beer is lacking. Nichols describes the taste as simple, straightforward, and inviting — sign us up!

Bring this brew to brunch and girls’ night

Lager is dry; it’s slightly bitter, a little flowery, and a wee bit bread-y. This flavor profile makes it easy to pair with many foods, from brunch faves to evening apps. It goes well with the fattiness of cheeses or salmon, the sweetness of pork, and the savoriness of herbaceous poultry. Not to mention that you could whip up a tasty batch of Micheladas with this good stuff! So the next time you’re making plans with your brunch bunch or inviting a few gals over for a chill evening, grab a six-pack of Day Beer to introduce to your crew.

What’s your fave girls’ night brew? Would you give Day Beer a shot? Let us know by tweeting us @BritandCo!

Dana Sandonato
Born in Canada and now living in the beautiful state of North Carolina, Dana is a coffee-reliant food writer with a healthy appetite, a taste for culinary adventure, a thirst for good beers, and an endless hunger for food photography. When not writing for Brit + Co, she can be found pouring herself into her blog-turned-webzine, Killing Thyme, or taste-testing at local breweries with her husband. Dana's ideal down time includes pizza, marathoning on Netflix, or watching her fave flicks from the 80s and 90s - no matter how great or awful they are!
Drink
Cocktails
Drink Foodie
The Conversation
More From Cocktails