13 Brunch Pizza Recipes You Need to Try This Weekend 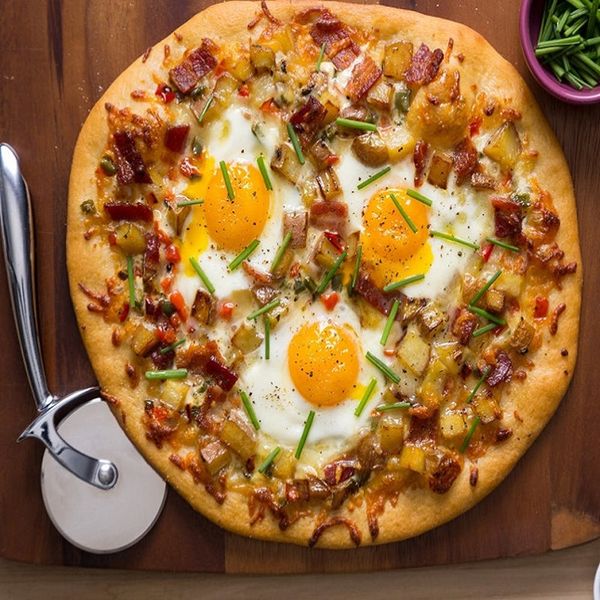 For far too long, pizza has been categorized for lunch and dinner (with cold leftovers totally suitable for breakfast). But, everybody knows that it doesn’t matter if the crust is deep dish or made with naan, it’s vegetarian, or the sauce is anything other than marinara. Pizza is *always* a good idea, and that even means when it’s brunch time. So bite into these 13 morning pies that are perfect for your favorite weekend meal.

Let’s hash this out right now; bacon, eggs, and potatoes make the breakfast of winners. Add some avocado to the mix and you’re eating the meal of legends. (via Get Inspired Everyday)

Pile the Italian flavors as high as you want with thin slices of dry cured ham. Instead of marinara, this pie is slathered with garlic butter. (via Emi Cooks)

Save time with these pizzas made with store-bought naan as the crust. Cream cheese holds the vegetables and comes together in just 15 minutes. (via The Almond Eater)

This triple berry creation is atop a whole-wheat flatbread. Smear it with a thick ricotta spread mixed with fresh lemon juice for a tangy-sweet treat. (via Toaster Oven Love)

This might look like a traditional pie, but it’s topped with potatoes and sprinkled with savory herbs like thyme and chives, making it anything but. (Spoon Fork Bacon)

Slicing into the pizza-stone-made pie will give you as much satisfaction as the ooey gooey center of the egg running over the other toppings. (via Foodness Gracious)

It’s about time Canadian bacon gets its shine, eh. And to keep with tradition, it’s made with red sauce. (via Simply Whisked)

Grab your cast iron skillet to make this hearty and healthy breakfast round. Chunks of boiled eggs top it, adding protein and texture. (via Breakfast and Eggs and Cheesecake)

Sit on down for a smoked salmon and salmon roe pie that’s going to forever change the way you think about lox. (via 84th and 3rd)

Switch things up with a rectangular artisan pizza crust. Throw on some veggies and cheese, and whatever you do, don’t forget to crack an egg on top for a protein-packed breakfast. (via Abby’s Kitchen)

This guacamole-slathered pizza is simple, savory, and can be made in just 10 minutes. (via Wife Mama Foodie)

Looking for a gluten-free and grain-free pizza? Smash some sweet potatoes for a crust and throw on your favorite veggies, like spinach and tomatoes. (via Katalyst Health)

Play it up with this Paleo dessert-like pizza made with pomegranates, grapes, and pichuberries. The spread is made with coconut cream, coconut oil, and shredded coconuts. (via Fresh Planet Flavor)
From Your Site Articles
Yasmein James
Yasmein James is a food writer living in New Jersey, but her heart’s on the other end of The Lincoln Tunnel. When she isn’t writing, you can find her eating her way to the most authentic ethnic restaurants in her travels. And writing all about it on her lifestyle blog, She’s Facing Freedom.
Brunch Recipes
Recipes
Brunch Recipes Food Recipes Roundups recipe roundup
The Conversation
Reviews:
More From Recipes