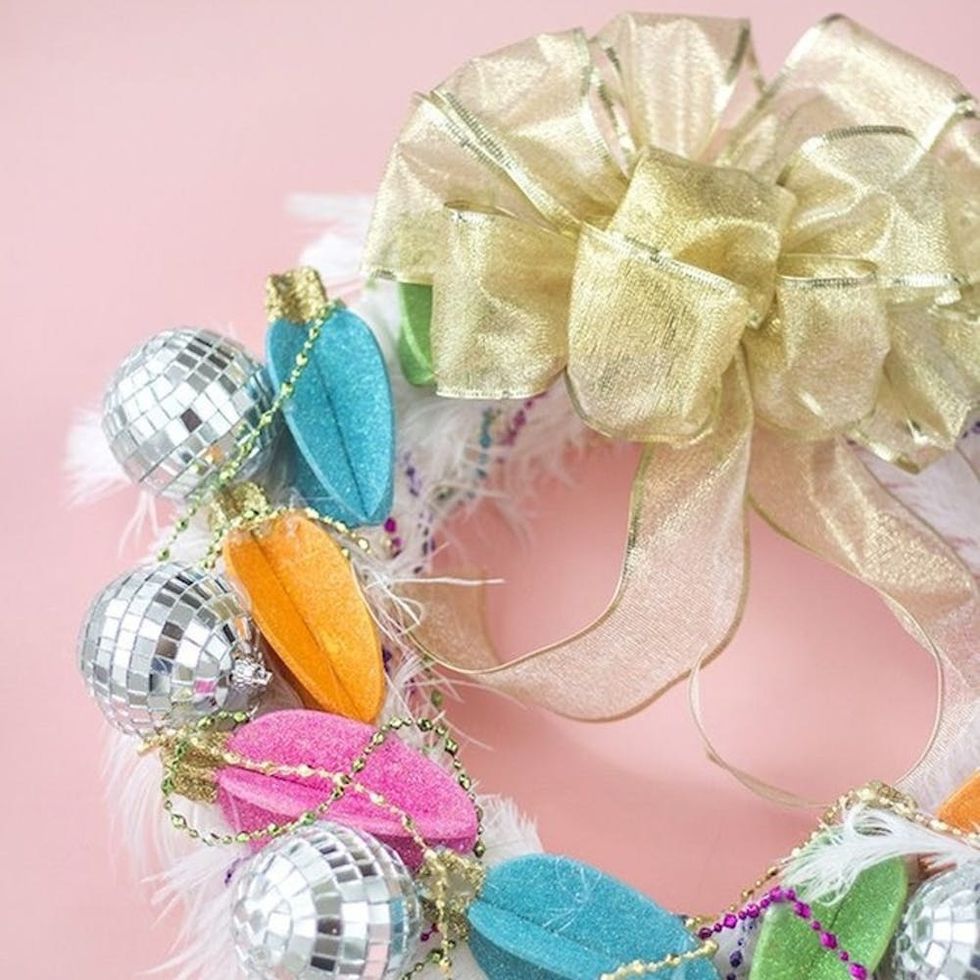 If you’re looking to add a little extra glitz and glam to your NYE party, deck out your space with disco ball-inspired decor. Think: dazzling disco ball garlands, chic disco ball jewelry and even a disco ball costume (say what?). Brighten up your New Year’s bash with these balls of joy that’ll provide the ultimate *sparkle* no other party can compete with. Scroll on for all 18 glam ways to rock disco decor this New Year’s!

1. DIY Disco Ball Wreath: Greet party guests with this sparkly stunner hanging from your front door. If you want to bring the disco-inspired party indoors, spruce up your mantle with this shiny and colorful piece of decor. (via A Bubbly Life)

3. Tinsel Trim With Disco Balls: Finally, a table runner that’s every bit as fab as the rest of your disco-inspired party decor. Go big or go home with sparkly tinsel combined with sequined disco balls for the ultimate tabletop display. (via Chicfluff)

4. Disco Ball Wall: This glittered-out office space is just the inspo you needed for your own glittery NYE party. No worries if you don’t have a clear acrylic wall — create your own disco ball wall by gluing them to each other with hot glue! (via Emily Henderson)

5. DIY Holiday Disco Ball Planters: Combine two favorites with this DIY disco ball succulent planter. It’s up to you whether you want to use them as a centerpiece for the table or as place cards. Either way, you can bet they’ll really *wow* your party guests. (via A Bubbly Life)

6. DIY Disco Ball Photo Holders: These photo holder DIYs are the *perfect* party favors to hand out at your NYE bash. All you’ll need to complete this cute gift idea is a Polaroid or an instant photo printer to print out pictures of you and your friends taken in front of your fab NYE photo booth backdrop. (via A Bubbly Life)

7. DIY Disco Ball Costume: Remember those paper mache projects you did in elementary school? Yeah, that’s all you need to know to tackle this DIY. Add holographic bird tape/ribbon and voila — you’ve got a disco ball costume! (via Studio DIY)

8. DIY Disco Ball-Inspired Skirt: Inject some of that New Year’s Eve *magic* into your attire with this DIY disco ball-inspired skirt. We’ll admit, this project takes some time to make, so grab shiny fabric, fabric glue, a black skirt and get going! (via Brit + Co)

9. DIY Disco Ball Headband: No doubt you’ll dazzle everyone around you while rocking this gorgeous headpiece. Light up the room with this piece of bling made of disco ball ornaments and a plastic headband. (via A Subtle Revelry)

10. Mini Disco Ball DIY: These mini sequin disco balls only require styrofoam craft balls, sequins and a hot glue gun. Scatter them around the house for unexpected pops of color and sparkle. (via Handmade Charlotte)

11. DIY Disco Ball Drink Stirrers: No need to splurge on expensive Champagne flutes *just* for your NYE party. Dress up plain glasses with these DIY disco ball-topped drink stirrers to give them that extra fancy touch. (via Julep)

FRI - NALLY! With the weekend upon us the perfect party tumbler is in order. @packedparty has got us covered. Sip, sip, hooray! 🎉 // #friday #party #frecklesonfillmore #packedparty #rosé #olé http://liketk.it/2pAk4 @liketoknow.it #liketkit

12. Disco Ball Party Tumblers: There’s no party cup more perfect for sipping bubbly than The Original Packed Party Disco Drink Tumbler ($18). If you’re as smitten as we are by these adorable tumblers, order yours and spruce up that bar cart!

13. DIY Disco Ball Necklace: Make fun and festive necklaces for you and your gal pals using a disco ball garland or disco ball ornaments. Drill holes through each ball, thread a jewelry wire through and attach them to your necklace chain. Use the same technique to make a pair of matching dangling earrings. (via The Alison Show)

14. DIY Disco Ball Piñata: Looking to give your NYE party photo booth extra oomph? Do it with this DIY disco ball piñata! Stuff it with candy, hang with silver tinsel and break it open at the end of the night! (via Studio DIY)

15. DIY Disco Ball Photo Booth Backdrop: Use a mirror board to create the sparkliest photo booth backdrop *ever.* Throw in plenty of shiny props, including disco balls (of course), and you’re all set for a picture-perfect setup! (via Oh Happy Day)

16. Hanging Disco Balls: Encourage your party guests to get down on the dance floor with an impressive hanging installation featuring disco balls. Hang the mirrored balls at different heights to create a similarly dynamic look. (via A Tipica)

17. DIY Mini Disco Ball Garland: These miniature mirrored ball ornaments were $1 for eight pieces. Talk about a deal! Check out your local dollar store for similar ornaments, and whip up this simple DIY for your party. (via Papier Valise)

18. Disco Balls in a Tub: Turn an empty tub into an instant party ensemble with disco balls of varying sizes. Surround your disco-decked container with tinsel garlands and/or fairy lights to amp up the *sparkle* factor. (via The Glitter Guide)

Will you go *disco* this New Year’s Eve? Follow us on Pinterest for more creative party ideas!