Stop Being Lame: How to Take Your Boring Lampshades to the Next Level 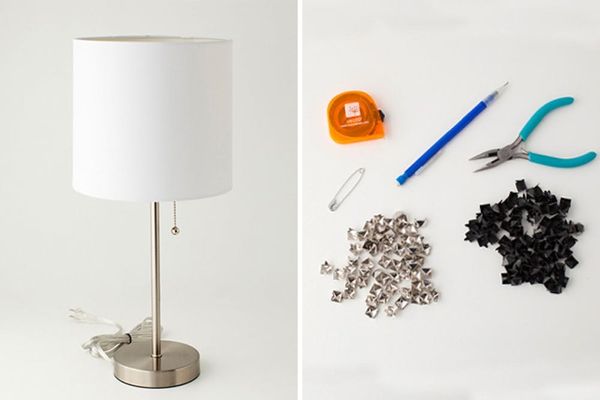 We were scrolling through our favorite DIY lampshades when inspiration struck for our next project: tricking out lampshades with studs! It’s no secret that we’re a bit stud-obsessed around here at Brit HQ—with metal studs as well as this stud ;)—so we thought we’d use this one material three ways to create chic patterns that dress up basic white lampshades.

We picked up these lamps from Target, which come in a variety of cool colors. But for this project, we chose ones with white lampshades since it’s the most prevalent shade of, well, shades. Plus, the studs really pop against a stark white canvas, leaving the the finals looking oh so clean and modern.

Our first lampshade is both playful and chic, with ombre-colored diamonds adding bright pops of color. This design is a bit freeform—no measuring required—so there’s lots of wiggle room in both the pattern and the colors to make sure this look really coordinates with your decor.

Start out by painting your studs with nail polish. We’re making two sets of diamonds: one that’s half periwinkle and half purple, and one that’s a teal/green combo. You’ll need a total of four studs per diamond, with two in each color to create an ombre-like effect.

Once the studs are dry, it’s time to place ’em, poke ’em, and push ’em through!

Before you place your first stud, make sure it appears as straight as possible by lining it up with its points at an upright cross. When it’s in place, push the stud into the lampshade to make a tiny indentation—these marks are where you’ll poke through the lampshade with your safety pin. The studs go through a bit easier with these holes to guide them. Once they’re all in, flip over your lampshade and curl each stud end to fasten it in place.

Now stud away! We wanted to create a polka dot meets argyle feel, so our placement was pretty random. To give our diamond pattern an ombre-feel, we placed the darker colored suds at the top and left of each diamond, then lined up each lighter shade underneath.

This lampshade makes such a perfect addition to any dresser or vanity. We just have to say it—we love lamp. :)

Creating the checkerboard pattern for this shade was pretty easy, and fairly methodical once our lines were drawn on the shade. While our gold and silver checkerboard only lines the bottom of our lamp, this pattern would look incredibly bling-tastic covering the entire shade!

First, trace the pattern. The checkerboard should be four studs across and four studs high, so start by outlining the very first row of studs. Our studs are a quarter inch-wide, so we marked every other quarter inch from the starting point around the entire lamp, but this measurement will vary based on the size of your studs. Once the entire lampshade is marked, use the safety pin to poke a hole on either end of your lines.

Now start placing your studs! The first row will have two gold side by side, followed by two silver. Then using the same measuring technique, build up your rows.

The second row should mimic the first exactly, ultimately appearing as two squares, one in gold one in silver, each with four studs. For the third and fourth rows, be sure to reverse your colors. So this time, start with silver first, then switch to gold. Now you should start to see the checkerboard pattern coming together.

Check out this checkerboard lamp! We think that this amount of blinged out trim is just right for an entryway table or living room credenza. The metallic studs really pop against all of the natural elements in the room, like brick and wood.

At Brit HQ, we consider chevron to be the queen of chic patterns, so it didn’t take much to settle on this design. We thought we’d keep the classic black and “white” feel on this shade. Sometimes it’s best not to mess with a classic. ;)

Once again, begin by tracing the pattern. To make three rows of chevron (two of black studs and one of silver), you’ll need to mark three starting points. Measure the length of the shade and mark the three center-most points. Next, line up the measuring tape with the top-most center mark, and begin marking 3/8 inch marks around the entire lamp, leaving a a full inch of space in between each of these marks.

Poke either end of each of these lines, then insert the black studs—this row of all black studs will be the base of the first chevron pattern. Now all that’s left is to build one stud up and one stud down, and your zig zag will start to take shape!

Once you have one full zig zag in place, its easy to line up the two remaining rows. Add your silver, then another row of black, and you’re basically done. Just don’t forget to flip the shade and curl your stud ends so they don’t fall out!

This might be our favorite shade of all! We love that the studs make the chevron look slightly pixelated, which delights our techy side. It’s definitely a fun way to amp up your desk and show off your style while you work!

Which lamp pattern is your favorite? Have you ever tried to stud-out a lampshade? Tell us in the comments below!

Create An Inviting Entryway With These Pro Tips

How to Make the Ultimate Brit-Approved Edible Garden