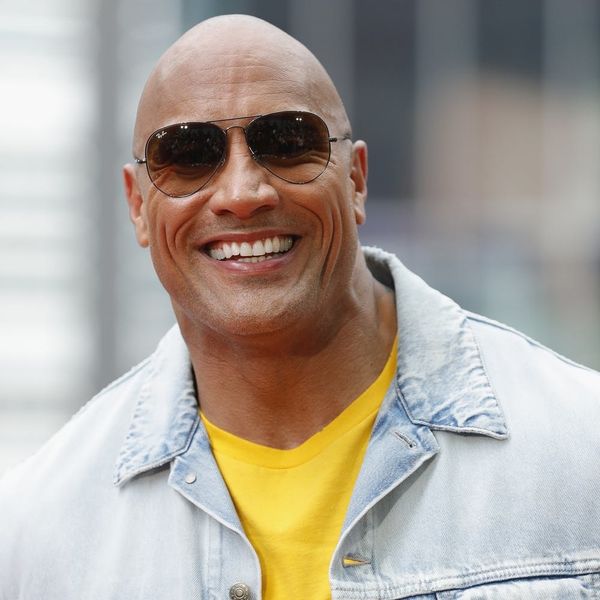 Country superstar Blake Shelton has been named People magazine’s Sexiest Man Alive for 2017, a title that he is happy to have but that he also took with a verygood-humored grain of salt. His new honor means that last year’s Sexiest Man, Dwayne “The Rock” Johnson, has been dethroned, and while you might think he’d react in a gentlemanly fashion, his response was actually so much better than we could have imagined.

Taking to Twitter a few days ago to reflect on his past “sexy” year, the Rock said, “Let’s all just take a moment to recognize @people’s Sexiest Man Alive will always be the 6’5″ 260lbs of tattooed brown eyed soul. And clearly there’s lots of steamy cheese on this pizza I’m serving. That is all. Let’s get back to work.”

Not unlike Shelton, the Rock clearly had fun with the title, leaning into it and going full “cheesy” in his comments. Then he ran with it even further, claiming that he was supposed to be the first ever back-to-back recipient, until a classic meme sabotaged him.

Truth is I was going to become the first ever back to back SMA but that absurd fanny pack picture made its rounds on the interweb again causing @people to rethunketh the whole damn thing 🤷🏾‍♂️ https://t.co/YE3x3q8mme

“Truth is I was going to become the first ever back to back SMA but that absurd fanny pack picture made its rounds on the interweb again causing @people to rethunketh the whole damn thing,” he joked.

The picture, if you’re not aware, is one frequently referenced — and even recreated — by the Rock on social media. It shows a young Dwayne Johnson with a full head of hair, faded-blue jeans, a black turtleneck, a silver chain, and, yes, a leather fanny pack that he’s casually clutching with one hand.

The blockbuster actor now looks back on the photo as a reminder that “things’ll get better,” though if we’re being honest, the pic itself is as good as it gets — and some fans even said they assumed it was the fanny-pack pic that won the Rock the Sexiest Man Alive title in the first place.

When I took this iconic absurdity of a picture in 1996 I was one year removed from sleeping on a used mattress I took from a garbage dumpster in the back of an hourly sex motel. Couldn't afford to buy a bed so we do what we gotta do to get by. You can imagine all the fun colorful bodily fluids I tried my best to clean off. 21 years later I'm taking the same photo backstage hosting #SaturdayNightLive for the fifth time. If you're going thru your own tough times "used mattress" stage, do your best to have faith things'll get better and always be willing to outwork your competition because you never know where life is gonna take you. And ALWAYS remember to place a soft tissue under your left elbow as to protect the fabric of the cheap ass swag turtleneck that had you out here looking like a bad ass buff lesbian. Oh and tuck the thumb in the fanny pack. Always tuck the thumb. 🤙🏾

After the new Sexiest Man Alive was named, many people took to Twitter to ask why the Rock didn’t get the title twice. “Did @TheRock become less sexy in the past year? Because he’s still a man and still alive, so I gotta call shenanigans on People,” one user wrote.

Shelton, for his part, is brushing off the haters, still jokingly tweeting, “Don’t hate me because I’m beautiful.”

What did you think of The Rock’s comment? Let us know @BritandCo!