WTF: These Temporary Tattoos LIGHT UP On Your Skin! 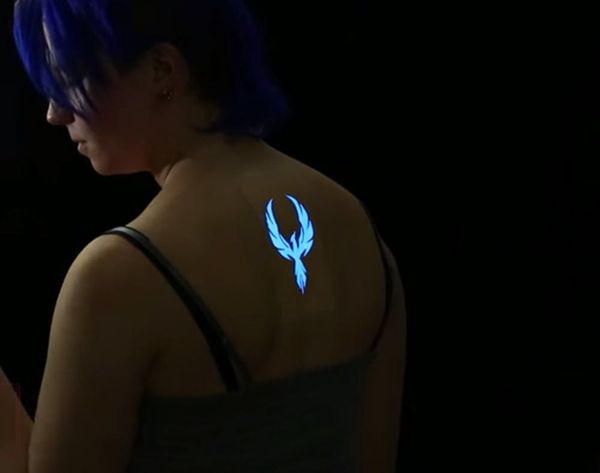 Our jaws dropped at the discovery of flexible 3D printed jewelry (filament that drapes like fabric? No way! YES WAY!), and now another high-tech material has been reimagined into something so fluid that you can adhere it completely to your skin like a temporary tattoo — seriously, and we’ll get to that soon. But first, meet the electroluminescent (EL) panel of the future, and the future is now: ELastoLite.

This highly flexible electroluminescent lamp is made with special inks that glow when activated by an electric charge. It’s a major advancement not just for EL panels themselves — standard EL panels are bendable, ELastoLite can crumple up like a dollar bill — but for the wide world of wearable tech. The paper-thin technology can be shaped on nearly any fabric to provide visibility from up to one thousand feet away at any angle. PLUS (and it’s a big plus) it’s waterproof, so it can stand up to harsh outdoor conditions AND is totally machine washable (and dryable).

Much like the technology behind CuteCircuit, ELastoLite advances the possibility for wearable tech to leap from the confines of your wrists, and even advance from a clunky EL wire embellishment into something that’s seamlessly integrated into fully wearable garments. Think… animated brand logos on your company swag, high-visibility panels on running and cycling gear, and even ELastoLite as patterns on uniforms in a glowing grid virtual reality… oh wait, it already was used to illuminate the costumes in Tron: Legacy. So what kind of super cool project could it possibly follow that up with?

Well, the minds behind SparkFun’s how-to series ElectriCute show you how to transform the EL panel into a glowing temporary tattoo that totally conforms to the contour of your skin. Yeah, it’s pretty much the coolest thing we’ve ever seen — check it out for yourself in the video below. Be warned: the process is “slow” and “tricky” — you’ll need some adhesives and theatrical-grade makeup to make it yourself, as well as a $53 technical wish list that includes one ELastoLite panel ($22). But we think all of that hard work will pay off in the end. Flash forward to Halloween 2014 and your glowing Harry Potter lightning bolt scar temporary tattoo. The Muggles at the party will be so jealous.

Would you give yourself a temporary tattoo with ELastoLite? What other ways would you use the flexible EL panel? Have you played around with one before? Tell us in the comments below.