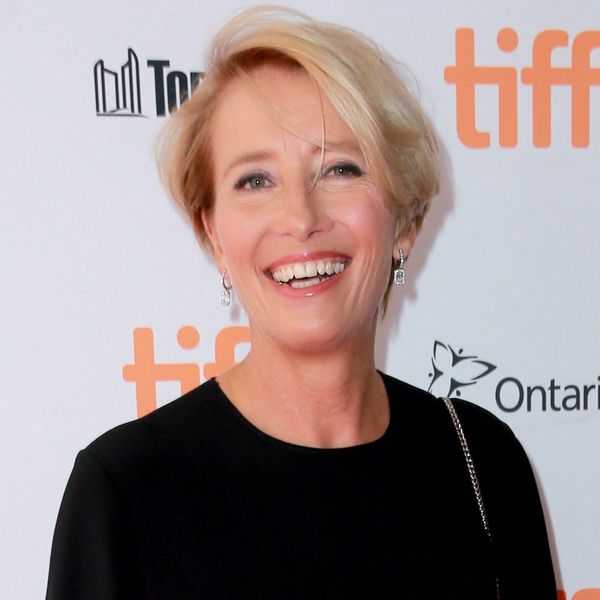 Who among us hasn’t nursed a broken heart with an Adele album and perhaps a bottle of wine? Maybe that’s why, even 15 years after Love Actually’s release, there’s one particular scene in the movie that still tugs at our heartstrings: when Emma Thompson’s character realizes that her husband (played by the late Alan Rickman) bought a beautiful necklace for another woman. Cue Joni Mitchell’s “Both Sides Now” and a brief tear fest in the bedroom.

We’ve all been there, right? Thompson says she certainly has — and her real-life pain inspired the raw performance. “That scene where my character is standing by the bed crying is so well known because it’s something everyone’s been through,” the two-time Academy Award winner revealed at a theater fundraiser in North West London on February 25, according to the Telegraph.

In Thompson’s case, heartbreak came at the hands of her ex-husband, actor Kenneth Branagh. The pair, who met on the set of the 1987 BBC drama Fortunes of War, divorced after six years of marriage in 1995 amid rumors that he’d had an affair with Helena Bonham Carter on the set of Mary Shelley’s Frankenstein.

“I had my heart very badly broken by Ken,” the Sense and Sensibility actress added. “So I knew what it was like to find the necklace that wasn’t meant for me. Well, it wasn’t exactly that, but we’ve all been through it.”

Thompson previously told the Telegraph that she drew on that experience for her acting. “I’ve had so much bloody practice at crying in a bedroom. Then having to go out and be cheerful, gathering up the pieces of my heart and putting them in a drawer.”

Like her Love Actually character, Thompson, who’s been married to actor Greg Wise since 2003, eventually picked up those pieces and has since said she feels no ill will toward Branagh or Bonham Carter (who went on to date until 1999).

“You can’t hold on to anything like that,” she previously told the Sunday Times. “It’s pointless. I haven’t got the energy for it. Helena and I made our peace years and years ago. She’s a wonderful woman.”