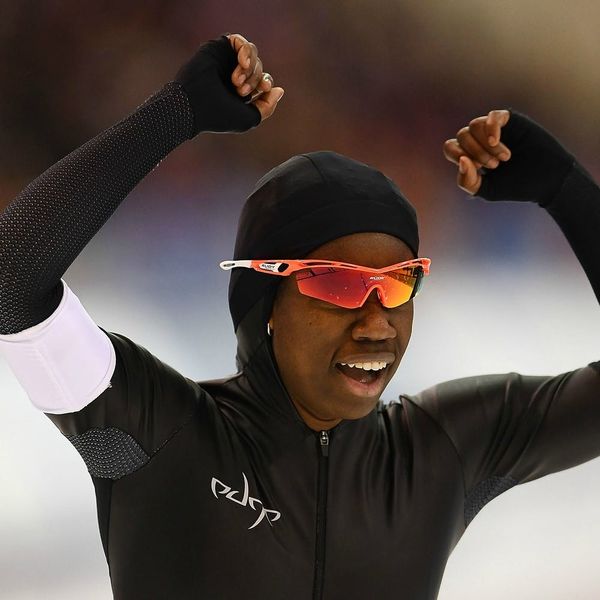 Long track speed skating is an intense, sometimes dangerous sport. For most skaters, it takes years to be able to clip on speed skates and hit the ice at Olympic-caliber speeds. But Florida native Erin Jackson is proving a rare exception. The former inline racer made the Olympic national speed skating team after just four (FOUR!) months of training.

Erin Jackson has been a speedskater for FOUR MONTHS and is already a U.S. Olympic qualifier. #WinterOlympics #BestOfUS pic.twitter.com/hbN2PYQFdx

Announcing her addition, Team USA shared the news that Jackson has made her first ever Olympic team with the women’s long track. “I surprised myself a lot,” the skater said after her qualifying race. “I really wasn’t expecting any of this. Just coming in as a newbie trying to do the best that I can. I still don’t even know [how I did it].”

The Ocala, FL native has been an inline skater (also known as rollerblading) for 15 years, making her conditioning in the summer sport ideal to transition to the ice. She’s won medals as an inline skater at the 2008-09 junior world championships, including gold in the 500-meter race, and even dipped her toes into the roller derby community as the star jammer for the Jacksonville RollerGirls.

If all of this isn’t exciting enough, Jackson is only the third Black Team USA member in speed skating history, proving that where there’s a will, there’s a way.

“I’ve been an inline speed skater for 15 years,” Jackson said post-race. “I came out to Salt Lake City for the first time in March… then I went back to inline for the summer and came back to Salt Lake in September, so it’s been about four months [of training] combined.”

With a few short weeks before February’s winter games in Korea, we’ll be waiting to see how newbie and groundbreaker Jackson fares on the international stage.

Will you check out Erin Jackson at the Olympics? Let us know @BritandCo!

Kat Armstrong
Kat has been a writer, social media maven and mom for longer than she's willing to admit. She's also spent time in front of and behind the camera, interviewing celebs, politicians and acting as a producer for fashion and artistic photography shoots. When she isn't writing for various orgs and publications, she's hanging with her kids, husband and French Bulldog, Peter, in Toronto, Canada.
Olympics
Empowerment
Olympics