Will *This* Runway Look Be 2015’s Hottest Makeup Trend? 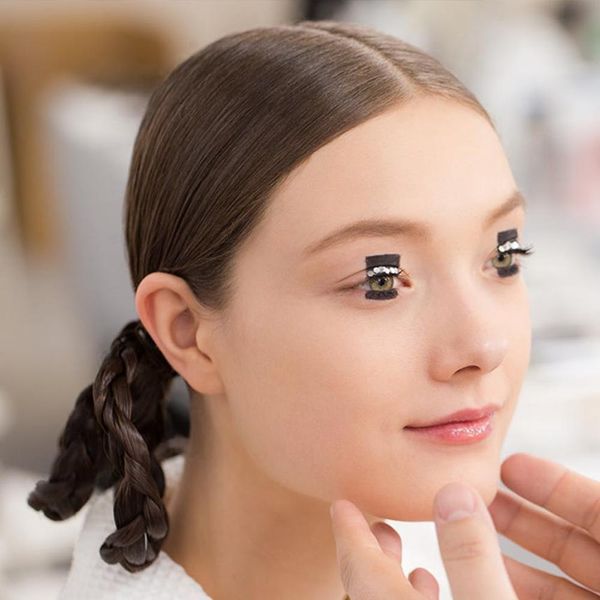 2014 is coming to an end in a few days, and in between our last-minute holiday shopping sprees and party planning, we can’t stop thinking about what 2015 will bring. We’ve already shared 2015’s color of the year and fitness trends, so now we’re turning to fashion for the new year’s makeup trends. If Dior has their way, you’d better get your eyeliner and sparkles ready!

Christian Dior showcased their Esprit Dior 2015 runway show in Tokyo two weeks ago, showing off their latest pre-fall line. While their clothing collection was incredible, the models’ makeup stole the show. For better or worse, it seems that more people are talking about this eye-catching makeup design than the actual showcase.

Peter Phillips, the Creative and Image Director of Dior Makeup, said he was inspired by makeup work from traditional Japanese Kabuki theater, which he combined with a look from Japanese comics. To create the look, he drew a rectangle on the center of the eyelid with DiorShow Pro Liner, which will be released in June 2015. Then he applied glitter to the center of the eyeline, which added an extra edgy and graphic look when the model closed her eyes. To keep all the emphasis on his eye makeup work, Phillips chose natural shades and hues for foundation, lips and nail colors. This eye makeup complemented Dior’s “Functional Glamour” collection, which was filled with sequin tops, architectural dresses and edgy, graphic patterns and prints.

On the runway, the effect was stunning. While we’re not sure this will make it into our everyday makeup look, we can definitely see people rockin’ this look for a special occasion.

What did you think about Dior’s makeup? Would you try this makeup look for the next party you’re attending? Tell us in the comments below!

Yuka Murai
As a fashion writer and official blogger at ELLE Japan, Yuka is always on the hunt for awe-inspiring stories, ideas and products from all over the world. Raised in Tokyo, she currently resides in the outskirts of Portland, OR. She has a two-year-old son and a newborn daughter.
Beauty Trends
Makeup
Beauty Trends Makeup Trends
More From Makeup