Here Is Every Outfit Rihanna Wore at the 2016 VMAs 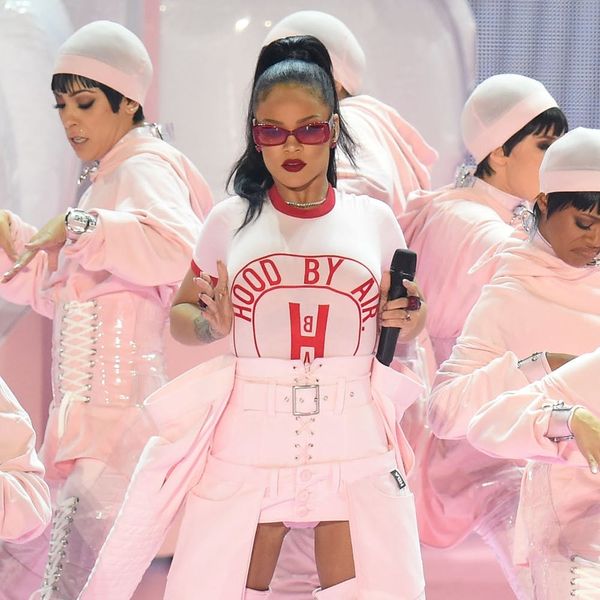 The 2016 VMAs gave us plenty of must-see looks, dominating out-of-style looks and one very exposed baby-bump-baring look. But for Rihanna’s special night, one outfit just wasn’t enough, natch. Opting for no less that five very different styles, RiRi showed off every side of her multifaceted self. From a pretty pink dream to deep, dark vibes and totally knock-you-off-your-a$$ class, check out every outfit Rihanna wore at the 2016 VMAs.

We were so ready for the party to get started and Rihanna… brought… it. Stepping onto the stage in a pink-infused ‘90s rave-like dream, “We Found Love” and “Where Have You Been” got things bumpin’. Wearing Hood By Air, her t-shirt was tucked tightly into her corset (yes, corset) that was attached to her pants. Or rather, those pant-like things that were just as amazing as they are IRL impractical. But who’s watching the VMAs for practical fashion?!

It was all about the dance hall party when Rihanna brought out “Rude Boy,” “What’s My Name” and “Work” (and, yes, we were all hoping Drake would pop out at this point, but alas, nope). Fishnets under loose pants, a t-shirt flipped up into a hoodie topped with a cap, and OMG that shiny, puffy bra.

For her third performance, RiRi brought an undeniably fierce vibe to the stage for “Needed Me” and “Bitch Better Have My Money.” Dramatic thigh-high boots, full-length gloves and a purple fur stole along with gold necklaces topped off the black garments of Rihanna’s third look. The mullet-y hair may not be a fan fave, but it certainly lent a little sumthin’ extra to this lit AF look.

When the time came for her final performance of “Stay,” “Diamonds” and “Love on the Brain,” it was followed by her newly public bae, Drake, presenting her with the Michael Jackson Video Vanguard award. For this, Rihanna opted for something much more formal. A puffy, golden Alexandre Vauthier haute couture deep-collared gown, it was taken in at the waist with a grommet-adorned belt. Full-length yet cut short in the front, it was the perfect mix of bada$$ class. Slicked-back hair and dangling jeweled earrings topped off the look that was just as memorable as the moment itself.

Rihanna went to Up & Down nightclub in NYC for the #VMAs afterparty pic.twitter.com/lO2cVgF8Th

For the after party, a sheer fringe-covered lime-green jumpsuit. Sheer. Fringe-covered. Army green. Jumpsuit. Really, how many people on this planet could pull off an outfit like this?! On RiRi, it’s just totally queenlike.

Which was your fave Rihanna look from the 2016 VMAs? Was their anything that you loved/hated? Tweet us @BritandCo!

Desiree O
Desirée O is a ‘Professional Bohemian’ who loves anything and everything related to the arts, entertainment, and pop culture. She ADORES being a ‘Newsy’ for Brit + Co, covering all of the latest tidbits of awesomeness that you want to read about. When she’s not writing, she’s either making messy art, going on long adventurous walks with her camera, or poking around over at bohemianizm (http://www.bohemianizm.com/). You can find out about Desirée O and her work at http://DesireeO.com/ or follow her on Twitter @DesireeO.
VMAs
Style News
VMAs