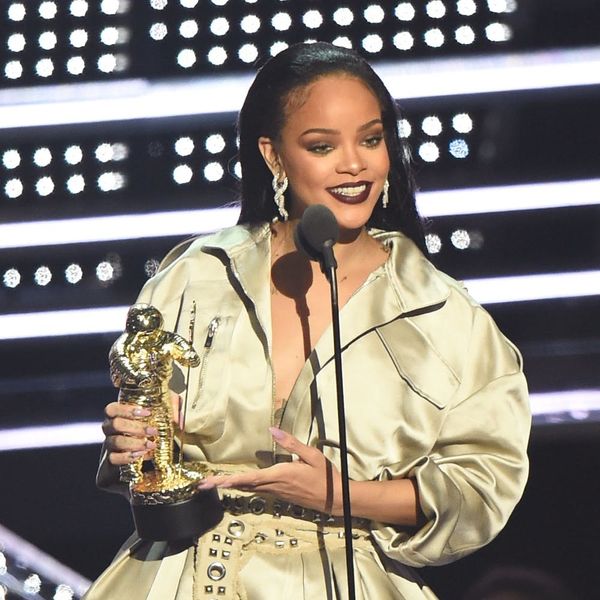 While Rihanna slayed her four (!) performances at last night’s VMAs, fans were wondering if and when her newly out-in-the-open bae, Drake, would pop out to join his lady on stage. First told that he was stuck in traffic, it wasn’t until the very end that the tux-wearing rapper joined RiRi on stage. With Twitter absolutely lit with speculation that he would propose, those dreams may have been dashed, but that doesn’t mean we were left with nothing. After Drake publicly professed his love for Rihanna, she didn’t swoon, she didn’t blush — instead she dominated the sitch with a (not so) subtle yet totally vicious burn.

“She’s someone I’ve been in love with since I was 22 years old,” Drake blatantly professed while presenting Rihanna with her Michael Jackson Video Vanguard award (yaaaaas, girl!). Going on to describe how amazing, incredible and unmatched she is — “She’s one of my best friends in the world. She’s a living breathing legend in our industry.” — Drake set the bar for fellas fully and unabashedly recognizing their woman’s invaluable worth.

Rihanna’s reaction? A hard eye-roll, a few giggles and then the implication that dude is quite short (not that there’s anything wrong with that). Seriously, she even asked the peeps behind the scenes to raise the mic. Too funny!

And it apparently didn’t end there. After leaving the stage hand-in-hand and making their way backstage, People reports that Rihanna greeted elated friends and family, giving them a little twerk in her ball gown. Drake was following behind and, oops, tripped on the train of her dress. Eep.

What did you think about Rihanna and Drake at last night’s VMAs? Tweet us @BritandCo!

Desiree O
Desirée O is a ‘Professional Bohemian’ who loves anything and everything related to the arts, entertainment, and pop culture. She ADORES being a ‘Newsy’ for Brit + Co, covering all of the latest tidbits of awesomeness that you want to read about. When she’s not writing, she’s either making messy art, going on long adventurous walks with her camera, or poking around over at bohemianizm (http://www.bohemianizm.com/). You can find out about Desirée O and her work at http://DesireeO.com/ or follow her on Twitter @DesireeO.
VMAs
Celebrity News
VMAs