8 Runway-Approved Trends That Are Already in Your Closet 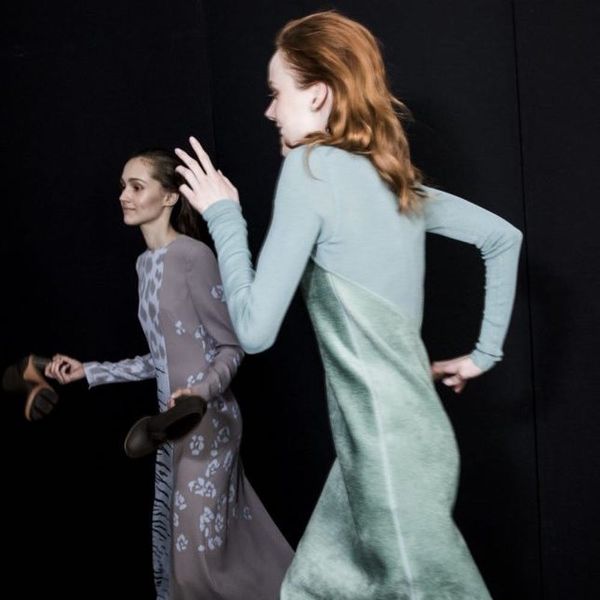 Even with the rise of see-now-buy-now collections, the majority of designers that show during fashion week don’t unleash their newest designs into the world until months later. Sure — it requires some serious patience, but think of it as a positive thing: more time to save up for that ever-growing must-have list. But if you’re itching to start recreating next season’s biggest trends RN, the eight looks below are where you’ll want to turn. From sleek leather jackets to painterly pastels, you can recreate these top runway trends with pieces you already own.

1. All Red Everything: London was feeling those fiery vibes for FW17. Red — in all of its various forms — is a classic fall color and it was out en force during February’s shows. Designers such as Teatum Jones (featured above), Roksanda, and Versus turned up the heat on the attention-grabbing hue by styling head-to-toe getups with undeniable girlboss flair. You can easily recreate the look by grabbing all of your red garb (bonus points for pattern play) and styling them into a bold monochromatic ensemble. We dare you. (Photo via John Phillips/Getty)

2. Corduroy: Thanks to Milan, looks featuring corduroy just might be the next big thing in boho. The material made a strong showing at Trussardi, Sportmax, Prada, and Ermanno Scervino, but it was Etro’s vibrant printed jackets (above) and color-block trousers that really grabbed our attention. Tap into the trend by styling a favorite corduroy skirt or pants with a statement jacquard jacket and asymmetric earrings FTW. (Photo via Tristan Fewings/Getty)

3. Pretty Pastels: With designers putting materials such as suede and velvet at the center of their spring and summer collections, it was only a matter of time before pastels became a cool-weather staple. The forces behind the transition? Milan mainstays Salvatore Ferragamo (above), Civdini, and Giamba. To keep the look feeling seasonally appropriate, layering (think: turtlenecks and slip dresses) is essential. (Photo via Tristan Fewings/Getty)

4. Silver: Sequins by day can feel a bit over-the-top, but when it comes to daytime metallics, our motto is more is more. Balenciaga (above), Lemaire, and Off-White encourage you to keep your love affair with high-shine separates alive straight through to next season, where your arsenal of silvery skirts, ankle boots, and blouses will feel right on cue. Shine on, girl!

5. Pinstripes: For the first time in a long time, statement stripes — brace yourselves — weren’t one of the top trends coming out of fashion month. Instead, it was pinstripes — their understated and business-like counterparts that have slowly been infiltrating your closet since fall — that ruled supreme. The proof? Just check the Issey Miyake (here), Acne Studios, and Uma Wang runways. Give yours a touch of RN appeal by pairing with a bright turtleneck, statement baubles, and v-shaped slingbacks for a getup that will take you from the boardroom to the bar like it’s nada. (Photo via Thierry Chesnot/Getty)

6. Sheer Style: Sheer dresses will continue to trend, according to Blugirl (above), Fendi, and Versace. This is good news for that flowery number you just scooped up from Zara. Keep the piece feeling fresh from season to season with elevated extras such as statement belts, embroidered ankle boots, and sculptural earrings. (Photo via Vittorio Zunino Celotto/Getty)

7. Forever Leather: As if you needed yet another reason to bust out your leather jacket (you practically live in that thing, girl). In true French girl fashion, Paris Fashion Week designers — including Stella McCartney (shown here), Balenciaga, and Alexander McQueen — embraced the fashion staple like whoa. Even if you don’t have a leather trench or blazer kickin’ around in your closet, you can totally get in on the trend by rocking a tried-and-true biker jacket with a semi-sheer blouse, tailored trousers, and sleek pumps. (Photo via Pascal Le Segretain/Getty)

8. Power Sleeves: Every It-girl and their mother has been doing the statement sleeve thing for a couple of seasons now, so it’s likely that at least one look-at-me option has made its way into your wardrobe. Don’t pack ’em up just yet. If Edeline Lee (pictured here), Roksanda, and Emilia Wickstead have anything to say about it, you’ll be sporting these OTT tops straight through 2018 — a prospect we’re totally okay with. Take the trend along to the office by slipping a blouse with bold cuffs under a tailored blazer for an unapologetically chic #OOTD. (Photo via Stuart C. Wilson/Getty)

Libby MacCarthy
Libby MacCarthy is an urban planner turned writer with a love (bordering on unhealthy obsession) of all things fashion and beauty related. She lives for perfectly brewed coffee, farmer's markets, dinner parties and perusing impeccably designed boutiques. When she's not on the hunt for the latest trends, you'll likely find her plotting her next adventure or nose deep in a book. Libby currently splits her time between the East Coast and her adopted home of France. Follow her daily adventures on Instagram.
2017 Style Trends
Trends and Inspo
2017 Style Trends Fashion Week Style Advice
More From Trends and Inspo