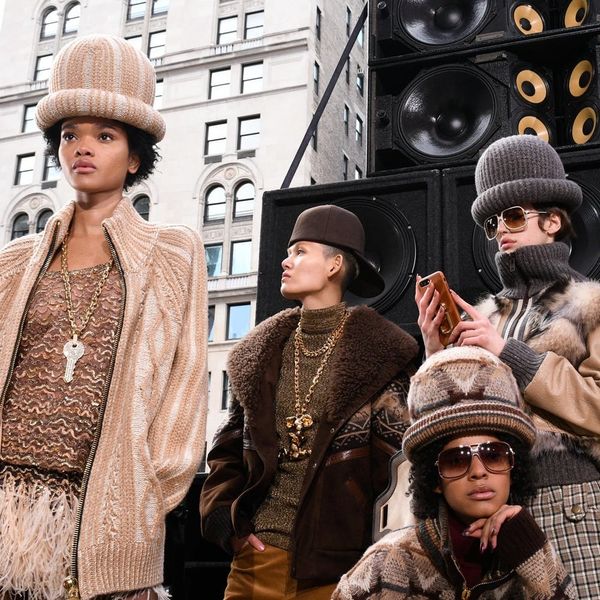 It’s become widely known that fashion week has a trickle-down effect, so even if you don’t have the budget to drop on designer duds, your fine-tuned style sensibilities certainly won’t suffer. And we’re not just talking about the endless runway style hacks and street-style trends that can be pulled off effortlessly with clothes already holdin’ it down in your closet. Within just weeks of hitting the runway, some of the biggest fashion week trends make it to fast fashion shops like Zara, H&M, etc. Here, we predict the trends that are guaranteed to be in stores come fall.

2. Camo Comeback: We salute you. We never really thought we’d see the day, but it’s official: Camo is back, and in a big way. Labels such as J.Crew (pictured above) injected the early 2000s trend with RN appeal, styling it alongside airy tulle skirts and bomber silhouettes. Look out for cropped and embellished versions of this trend. (Photo via Krista Kennell/Patrick McMullan/Getty)

3. Sculptural Accessories: Designers still appear to be on a more-is-more kick, at least as far as accoutrements go. Baubles were big, bold, and artistically inspired, especially at Proenza Schouler, where models rocked OTT architectural cuffs that we could totally see popping up in COS’s accessories shop (fingers crossed). (Photo via JP Yim/Getty)

4. All Belted Everything: We love when designers highlight the sartorial power of a simple accessory, and FW17 paid tribute to the belt. 3.1 Phillip Lim was just one of the many designers to style statement cinchers over streamlined coats and blazers to elevate an everyday essential into a bona fide statement piece. Makes you kind of excited for cold weather, doesn’t it? (Photo via Peter White/Getty)

5. Deconstructed Shirts: There’s been a current of button-down-philia running through the fashion world as of late, and FW17 is no different. Bold interpretations of the office basic were a dime a dozen this season, but the topper that took home the prize for most cutting-edge design had to be this all-in-one number spotted at Monse. Ruffles, cutouts, a bow neck, and frilly collar make for a seriously Insta-worthy top that’s bound to end up on every blogger babe’s Insta feed. Keep your eyes peeled at Zara and the like for a reproduction of this stunner. (Photo via Peter White/Getty)

6. Flirty Fishnets: Once reserved for after-hours affairs, the fishnet is officially entering into the realm of daytime dressing. While we’d expect as much from envelope-pusher Jeremy Scott (seen above), the trend also made its way into more mellow collections such as Simon Miller and Cinq et Sept, which solidifies its staying power. (Photo via Peter White/Getty)

7. Gender-Neutral Denim: While skinny jeans will always be near and dear to our hearts, fashion is moving in a more androgynous direction. The proof? This relaxed double denim look from Calvin Klein that’s giving off major boy-meets-girl vibes. (Photo via Gustavsson/MCV Photo/Getty)

8. Quirky Toppers: Cozying up is about to get crazy cool, thanks to Marc Jacobs. Pharrell-esque beanies and statement baseball caps made a pretty mean argument for ditching your trusty knit topper next season. (Photo via Peter White/Getty)

9. Luxe Velvet: The fashion world is still crushing hard on velvet, but Ulla Johnson (above), Creatures of Comfort and Jason Wu took the super soft fabric to the next level with bold jewel tones and RN cuts. The rich fabric will definitely be high on our must-have list. Prepare for it to be EVERYWHERE. (Photo via D Dipasupli/Getty)

10. Bold Buckets: Forget Mansur Gavriel for just a second — everyone’s favorite handbag (the bucket, if you didn’t know) is getting an It-girl makeover with a sleek central loop handle and geometric embellishments. We can see this showing up on shelves at Zara, Uterqüe, COS, and Charles & Keith — we just hope we’re right. Swoon. (Photo via Slaven Vlasic/Getty).

11. Extreme High Waists: High waists have been a thing for a while now, but designers are raising the bar (or rather the waistline) yet again. Take your wardrobe to haute new levels by ditching low-rise trousers in favor of this legs-for-days look a la Rosie Assoulin. (Photo via Randy Brooke/WireImage)

12. Power Suits: 2017 is looking to be a good year for your girlboss wardrobe. Structured skirt and pant suits in power pink, plaid, and everything in between promised to reignite your love passion for this classic on-the-job ensemble. This Rosie Assoulin number in particular is an ode to the working woman who is just as serious about fashion as she is about climbing the career ladder. (Photo via Mike Coppola/Getty)

Libby MacCarthy
Libby MacCarthy is an urban planner turned writer with a love (bordering on unhealthy obsession) of all things fashion and beauty related. She lives for perfectly brewed coffee, farmer's markets, dinner parties and perusing impeccably designed boutiques. When she's not on the hunt for the latest trends, you'll likely find her plotting her next adventure or nose deep in a book. Libby currently splits her time between the East Coast and her adopted home of France. Follow her daily adventures on Instagram.
2017 Style Trends
Style News
2017 Style Trends Budget-Friendly Fashion Week New York Fashion Week
More From Style News