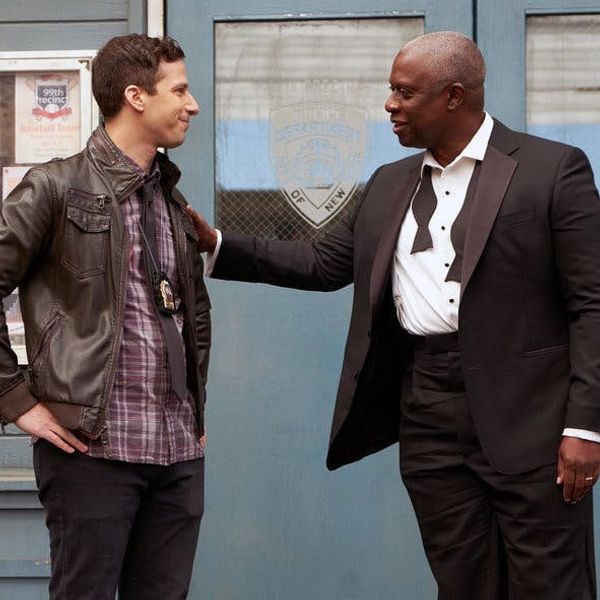 We all need an escape from the day-to-day doldrums and dramas that can drag us down from time to time. Practicing self-care feels more important than ever, and along with your sheet masks and wine, escaping into an uplifting TV show for an hour (or, fine, six) can help you decompress and empower you to take on another day. Here are a few recommendations from the current slate of TV shows that make the world feel okay — even for a little bit. (Photos via Gavin Bond/Netflix + Paul Drinkwater/NBC + John P. Fleenor/Fox/Universal Television + Michael Desmond/The CW)

Brooklyn Nine-Nine: NBC saved Brooklyn Nine-Nine from cancellation earlier this year, and we couldn't be happier to have at least one more season of the relentlessly positive comedy. From the joyful ensemble cast to the show's dedication to on-screen representation and the love that radiates from every bad joke and serious moment, this show is a treasure and will never not make you feel warm and fuzzy. (Photo via John P. Fleenor/Fox/Universal Television)

The Good Place: While its hyper-meta narrative runs the risk of being exhausting, The Good Place's constant reinvention and whip-smart punchlines keep it from weighing the show down. It's literally a show about people trying — and sometimes failing, but then trying again — to be better. What could be more inspiring? Plus: Janet and Bad Janet. The cure for all that ails you. (Photo via Colleen Hayes/NBC)

Making It: NBC's newest competition reality show is a warm, familiar hug. It's the support of your friends, your family, and your community. It's creatively satisfying. It's bad puns told by good people. It's a Parks and Recreation reunion. It's literally positivity incarnate, and we can't get enough. (Photo via Paul Drinkwater/NBC)

Queer Eye: Are you already crying? We're already crying. If Netflix's Queer Eye reboot could just air nonstop in every corner of the world, things would be so much better. The Fab Five are genuine, non-judgmental, light-hearted, and empathetic, and they make everyone they encounter feel like anything is possible. If you weren't crying already, well, you are now. (Photo via Austin Hargrave/Netflix)

Nailed It!: Look, failure is a part of life, and it's important to be able to, at the very least, be okay with it. Nailed It!, Netflix's baking-fail reality show, takes it to the next level, not only expecting failure, but teaching people to laugh at it — and even celebrate it. It's nice not to take things so seriously sometimes! (Photo via Netflix)

Unbreakable Kimmy Schmidt: Kimmy Schmidt has been through an unspeakably traumatizing experience, but she embraces it with her entire self, acknowledging it, talking and laughing about it, and then using it as fodder for her belief that she can do and get through anything. Real-life events aren't always so tidy, of course, but it's still nice to see and know that kind of resilience and positivity. (Photo via Eric Liebowitz/Netflix)

Grace and Frankie: This beloved Netflix sitcom is a celebration of the unexpected complexities of life. After their husbands fall in love with each other, 70-somethings Grace and Frankie must confront the big change and learn to move on. They do so through an imperfect friendship that teaches them to keep living even when everything you thought you knew gets taken away. (Photo via Melissa Moseley/Netflix)

Superstore: Workplace comedies shine a light on and bring out all the good in a seemingly boring day-in, day-out existence. The Office did it for nine seasons, and now Superstore — with its equally endearing and strange characters — is carrying the torch. (Photo via Chris Haston/NBC)

Bob's Burgers: We could all take some cues from the way the strange and sometimes difficult members of the Belcher family repeatedly show up for and support each other. (Photo via Fox)

Younger: Women are at the forefront of this TV Land staple. The show is built around the sadly all-too-real concept of a woman needing to lie about her age to get the job she wants, but Younger navigates that issue and many others through the power of female friendship. (Photo via TV Land)

Jane the Virgin: Despite all the drama — and there has been a lot of it in four seasons — the warmth of Jane the Virgin's characters always triumphs, making even the worst situation seem survivable. There is trauma and loss and pain, but there is love, too, and that's the only way through the bad stuff. (Photo via Michael Desmond/The CW)

Fuller House: There's a nostalgia factor to this one, for sure. But even ignoring that, Fuller House is so reliable in its inevitable happy endings that it always feels good to watch. Nothing too major ever rattles the Tanners and Fullers, because at the end of the day, they're family — and they stick together no matter what. (Photo via Mike Yarish/Netflix)