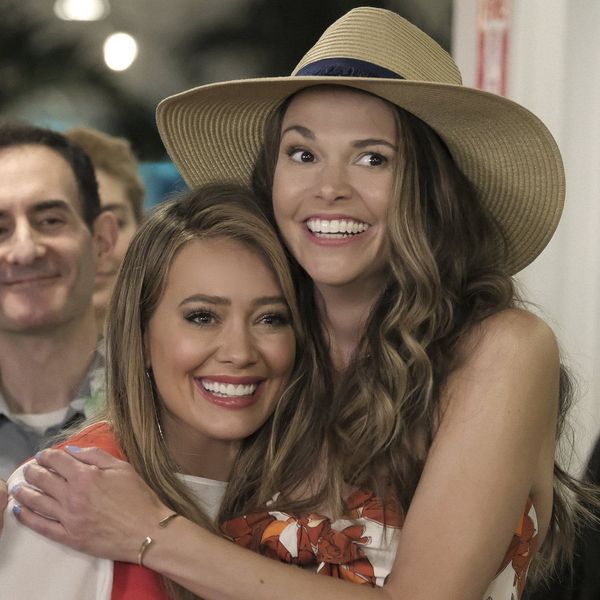 Welcome to Brit + Co's Binge-Worthy Bulletin, a new series where we choose a show we're obsessed with and tell you all the reasons why. This week's pick is the grossly underrated Younger, which is currently airing its fifth season on TV Land. Younger is about Liza Miller (Sutton Foster), a 40-something divorced mom who pretends to be in her 20s to get a job in publishing. It sounds far-fetched, we know, but it's incredibly entertaining, and Foster is one of the most likable stars on TV. Our main complaint is that the episodes aren't longer. Click through to see all the reasons you should watch the show, and then catch up on the first four seasons on Hulu. New episodes air Tuesdays at 10pm ET/PT on TV Land. (Photos via TV Land)
The girl power: Much like one of our other favorites, The Bold Type, Younger is all about strong, independent women. Liza is definitely flawed — for much of the first few seasons, she's lying to almost everyone in her life — but she's also driven and smart and loyal and kind. The women around her are complex, well-rounded characters, too. Maggie (Debi Mazar), Kelsey (Hilary Duff), Lauren (Molly Bernard), and Diana (Miriam Shor) all bring something different to both Liza's life and the show, and we love each and every one of them. (Photo via TV Land)
The jaw-dropping twists: We won't spoil any of them for you if you're not caught up, but trust us when we say they're major. Younger doesn't save its big cliffhangers just for season finales; it's constantly dropping huge bombshells and reinventing itself, even within single episodes. (Photo via TV Land)
The Sex and the City-worthy fashion: And we say that confidently because SATC's costume designer Patricia Field set the tone for the series. Prepare to Google all of Diana's necklaces, Kelsey's high-fashion boardroom outfits, and Liza's modern boho styles. Oh, and you've never appreciated men's suits until you've seen Charles (Peter Hermann) wear them. (Photo via TV Land)
The female friendships: Yes, there's romance — more on that in a bit — but the best relationships on the show are the ones that Liza has with her girlfriends. (Especially now that — season 4 spoiler! — Kelsey knows the truth about Liza's age.) They have the occasional squabble, but for the most part, they lift each other up, help each other out, and do whatever they can to be there when it counts. And it always counts. (Photo via TV Land)
The LGBTQ+ representation: Liza's BFF/roommate Maggie is a lesbian, and Lauren is, in actress Molly Bernard's words, "a fluid pansexual female." Both are dynamic, multifaceted characters, and while their romantic relationships definitely factor into the show, there's more to them than who they happen to be dating. Season 5 also introduced the series' first gender non-binary character, Tam (Jesse James Keitel). (Photo via TV Land)
Kelsey's hustle: In a publishing house where sexual tension seems to dominate, Kelsey's eye on the prize — that is, media domination — is inspiring AF. As head of her own millennial imprint, she can sign the next big author, pull a near-all-nighter, and still make it to the office on time, hangover-free, and impeccably dressed. (Photo via TV Land)
#TeamJosh: A lot of shows have love triangles, but not a lot of shows have love triangles where you genuinely root for all three people involved. Josh (Nico Tortorella) may not seem like the most obvious match for Liza — he's a 20-something tattoo artist who's only a few years older than her daughter — but that's part of his charm. He brings out something in her that she doesn't have with anyone else, and he genuinely loves her and wants a life with her, even after everything that's happened between them. (Photo via TV Land)
But also #TeamCharles: That voice. Those suits. Do we have to say more? Okay, fine. Charles is not just age-appropriate for Liza; he also shares the same passion for literature and the same love of off-the-beaten-track diners, and he loves the way she is with kids (but like her, he doesn't want to have any more). Their chemistry isn't just a match for Liza's fake life. It's a match for her real life. (Photo via TV Land)
Miriam Shor/Diana Trout: We could write 10 slides just about Shor, who plays Liza's boss at Empirical. When we're not waiting with bated breath for the next Liza-Charles-Josh interaction, we can't take our eyes off of Diana. Her biting wit, her withering stares, and her so-rude-they're-endearing dismissals make us *almost* want to work for her. She also has the most outrageous, amazing accessories, like this giant floral choker. No necklace is too big or too garish. (Photo via TV Land)
The guest stars: Empirical's prospective authors have included characters played by Kristin Chenoweth, Jane Krakowski, Ana Gasteyer, and Christian Borle, the real-life ex-husband of star Sutton Foster. Ugly Betty's Michael Urie also has a recurring role, as does Friends With Kids actress and writer Jennifer Westfeldt, as Pauline, Charles' ex and the author of the tantalizing Marriage Vacation. (Photo via TV Land)
The real-life reading material: As noted in the previous slide, Pauline wrote a novel called Marriage Vacation, a not-so-fictional story about a woman who leaves her husband and kids to find herself and an adventure. That book now exists in real life, and it is as juicy as promised. Especially page 58. You'll see Charles — er, Karl — in a whole new light. (Photo via TV Land)
The behind-the-scenes scoop: Younger's Instagram and Facebook feeds are basically a nonstop stream of bonus features, including deleted scenes, bloopers, cast interviews, and sneak peeks. There's also a weekly Facebook pre-show, Getting Younger, and an after-show podcast, Younger Uncovered, as well as specialty cocktail recipes to go with each episode. Because there's no such thing as too much Younger. (Photo via TV Land)

Do you watch Younger? Tell us why you love it @BritandCo!

Do you watch Younger? Tell us why you love it @BritandCo!