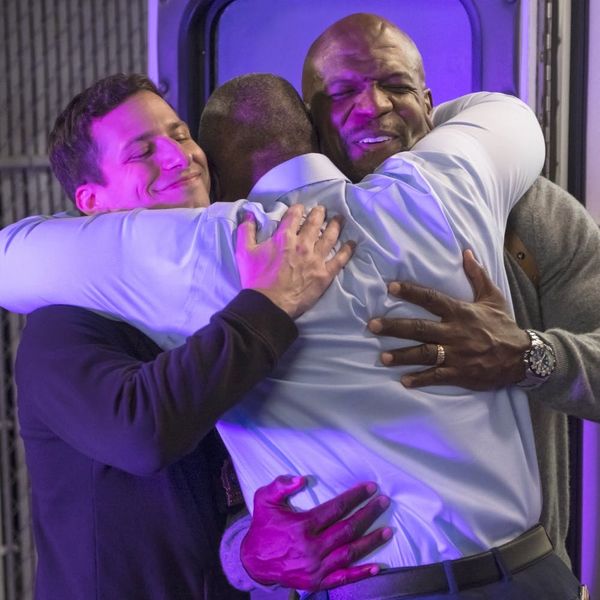 Brooklyn Nine-Nine fans were shocked and saddened when Fox announced this week that it was canceling the beloved sitcom after five seasons. Viewers, including a few A-list celebs, immediately got #RenewB99 trending on Twitter, and as with many other shows that were canceled too soon, it became clear just how deep people's love for the one-of-a-kind comedy goes. Fortunately for everyone involved, NBC rescued the show from extinction. The cast and crew announced on Friday that the peacock network had picked it up for a sixth season just one day after its cancellation. So in celebration of one of the best comedies on TV, here are just a few of the things we love most about Brooklyn Nine-Nine. (Photos via Fox)
The cast. Here's an obvious one: Brooklyn Nine-Nine has, dare we say, the best comedic ensemble cast on TV right now. The 99th precinct's detective squad — which includes the juvenile Jake Peralta (Andy Samberg), the eager Amy Santiago (Melissa Fumero), the mysterious Rosa Diaz (Stephanie Beatriz), the yogurt-loving Terry Jeffords (Terry Crews), the bumbling Charles Doyle (Joe Lo Truglio), the narcissistic Gina Linetti (Chelsea Peretti), and, of course, the stoic Captain Holt (the treasure that is Andre Braugher) — have become our best TV friends, and their own TV family, over the last five years. There's no other cast like them. (Photo via Jordin Althaus/Fox)
Gina Linetti. We already praised the entire cast, but can we pour an extra one out for Gina? The truth-telling, self-loving weirdo whom we equally fear and aspire to be is a force in and of herself. In her own words, "Honestly, I'm going to last forever. You hear that b**ches? I'm gonna last foreverrrrr!" (Photo via Fox)
The inclusivity and diversity. No other mainstream TV comedy boasts two women of color in leading roles, an openly gay character, and an openly bi character. B99 never has never fought to make teachable moments out of the voices that are still so underrepresented in media — it simply lets its nuanced, well-rounded characters shine. (Photo via Fox)
The guest stars. Brooklyn Nine-Nine can always be counted on for surprise cameos and guest appearances by some of Hollywood's top talent. To name a few memorable appearances, who could forget Nick Offerman being revealed as Captain Holt's ex-boyfriend? Or Adam Sandler as himself in the very first season? Or, in the most recent season, This Is Us star Sterling K. Brown as a perfectly villainous and manipulative murder suspect? May the surprise and delight of the Nine-Nine live on forever. (Photo via Fox)
The Halloween episodes. One word: Iconic. Brooklyn Nine-Nine's yearly Halloween heists are fun, ambitious, and dependable episodes, but they also allow the intricate dynamics of these characters in their workplace to reveal themselves. (Photo via John P Fleenor/Fox)
The non-toxic masculinity. All of the men of the Nine-Nine cherish their relationships with each other and are tender, present, and affectionate with one another. It's a rare and important depiction, and this show gets it so, so right. (Photo via Jordin Althaus/Fox)
It's truly just joyful and endearing and warm. The sheer sweetness and hilarity of Brooklyn Nine-Nine has shone even brighter in what has felt like increasingly tumultuous societal times. We love a sardonic "sadcom" as much as the next TV fan, but B99 only ever leaves us with the warm fuzzies, and it's as refreshing as it is nourishing. (Photo via John P Fleenor/Fox)

What do you love most about Brooklyn Nine-Nine? Let us know @BritandCo!