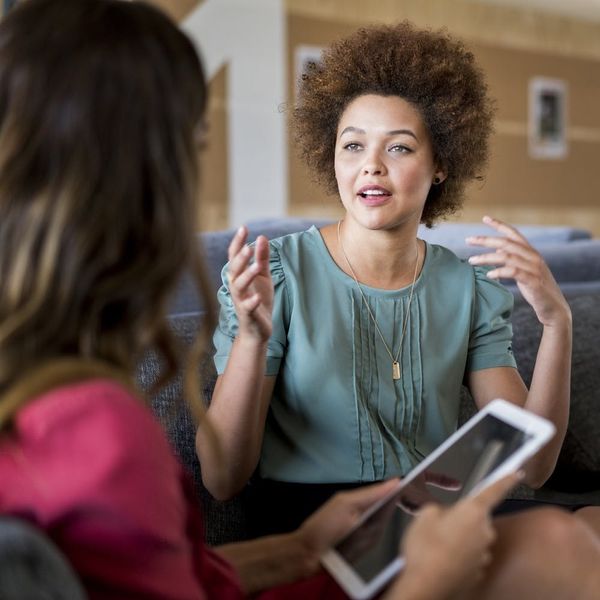 From having a job that can actually affect your period (say what?) to dealing with the wage gap or even pushing for more diversity at work, crushing it as a career woman can be *really* tough sometimes. That’s why we were so intrigued when we came across a new survey from theBoardlist, a corporate platform that aims to get more women onto company boards. New data representing more than 100 female C-level executives from theBoardlist community shows that there’s a single thing that can help you rock it at work: having a mentor.

That’s right, whether or not you have a mentor majorly matters when it comes to navigating work politics, identifying growth opportunities, and forging ahead while you learn new skills and make valuable contributions to your team and company. In fact, over 80 percent of theBoardlist survey respondents say that they believe having a mentor is the key to success. That’s HUGE.

Also inspiring: More than half of the same women say that *other women* are their role models, so it’s also not a huge surprise that more than 50 percent of the execs surveyed had been nominated to theBoardlist by an existing member, further proving that women are amazing advocates for one another. Go, ladies!

When it came to mentors, though, the female C-level execs shared some disappointing stats. They noted that their mentors were more than twice as likely to be men; and sadly, nearly 3/4 of the women said that they’d faced discrimination for being a woman at work once or more during their career. Age topped the list of other concerning factors they felt held them back, with more than half of the women saying they could pinpoint this as a problem that occurred earlier on in their career, again proving how valuable a mentor can be for young women — and how seriously important it is that you speak up when you see people, including yourself, being treated or judged differently.

Just as powerful is your ability to help create more female-focused, professional mentor/mentee relationships everywhere. According to theBoardlist COO Lesley Grossblatt, anyone looking for a mentor should seek out someone who can help you excel. “They should have a breadth and depth of experience to guide you along a path they’ve already figured out,” she says. Grossblatt also advises you look for someone you feel comfortable talking with who is generous in sharing their time, ideas, and support. On the flip side, as a mentee, you can help make the relationship fruitful by being fully present and engaged. “Ask questions and be transparent when sharing your concerns and hopes,” Grossblatt says. Never underestimate that you can help create change!

Do you have a mentor or serve as one for someone else? Tell us about how your dynamic helps each of you grow, achieve, or give back on Twitter @BritandCo!

Krista Gray
Krista Gray is a web producer and freelance writer who lives in San Francisco. When she's not working with clients through her company GoldSquare, she loves reading, traveling, and learning new things.
Work
More From Work