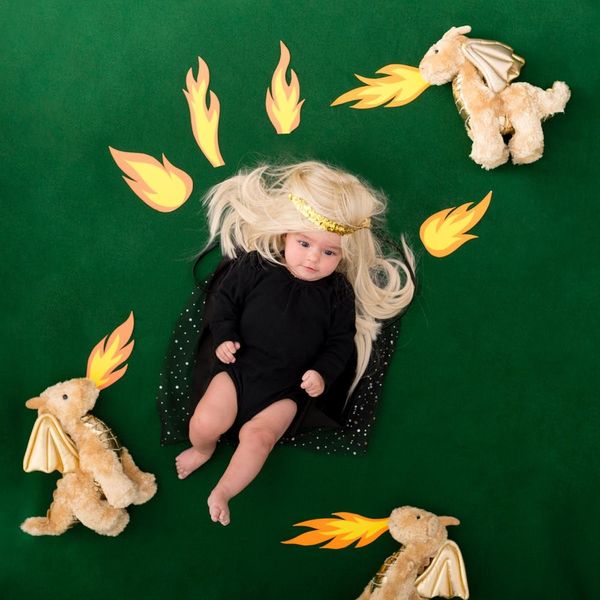 Anjelika Temple here, Chief Creative Officer of Brit + Co and brand new mom to baby girl Anokhi. I’m pretty much obsessed with Halloween. Always have been. In the last six years, I’ve donned over 50 solo costumes, 20 couples costumes with my husband David, and even a handful where I twinned with my pup Turkey. When I found out I was having a daughter, I may or may not have started brainstorming Halloween costumes before I started thinking about names ;) I immediately fell in love with the idea of dressing my little girl up as some of my favorite badass babes and female role models throughout history. Scroll on for nine baby Halloween costume ideas for the littlest feminists in your life.
Hillary Clinton: A rabble rouser from the start, Hillary’s got First Lady, Senator, Secretary of State, *and* first female presidential candidate on her resume, and that’s just the recent stuff ;) To create a look inspired by our favorite nasty woman, it’s all about the appearance of a pantsuit. Even if, as in this case, there are no actual pants!
Ruth Bader Ginsburg: Appointed to the Supreme Court in 1993 by President Bill Clinton, Ginsburg is a force to be reckoned with. Known as the Notorious RBG, she’s lauded as a champion of the left. Before serving as justice, Ginsburg spent the bulk of her legal career advocating for the advancement of gender equality and women’s rights, winning multiple victories before the Supreme Court.
Yayoi Kusama: Avant-garde artist Yayoi Kusama is a personal hero of mine, and it goes beyond a love of patterns and polka dots. Her sculptural and installation work invites the viewer to be part of each piece, and simultaneously calls upon feminist, surrealist, minimalist, and pop art motifs. If you haven’t experienced one of her exhibitions, add it to your art bucket list ASAP.
A Suffragette: These OG feminists fought for our right to vote. Hell to the YES. To recreate this late 19th-century look, you’ll need a bonnet, a simple white dress, and a DIY “Votes for Women” sash.
Malala Yousafzai: Barely 20 years old, Pakistani activist Malala Yousafzai is a widely loved and globally respected activist, focused specifically on the right to education. When she was just 17, she became the youngest-ever Nobel Prize laureate for her struggle against the suppression of education for children, particularly young girls. On being honored by the UN with an official Malala Day, she said, “Malala day is not my day. Today is the day of every woman, every boy, and every girl who have raised their voice for their rights.” Hear, hear.
We Can Do It!: Often referred to as “Rosie the Riveter,” this 1943 wartime propaganda poster experienced what’s best described as a feminist renaissance when it was rediscovered in the early ‘80s. Though it was created simply as an inspirational image, over the last 30 years it’s served as a symbol of female empowerment, where the “We” represents “We Women.” We can get down with that! To dress your own little lady as this icon, all you need is a denim onesie and red bandana. So easy.
The Handmaid’s Tale: Hailed as a feminist work since its publication in 1985, Margaret Atwood’s novel The Handmaid’s Tale makes for a slightly dark, dystopian costume option for your feminist tot.
Amelia Earhart: The first female pilot to fly solo across the Atlantic, Amelia Earhart’s life is full of inspiration for your little adventurer. Plus, dressing your wee one up as this bold babe involves the cutest baby aviator hat and goggles you ever did see ;)
Khaleesi: Let’s let this lady’s title speak for itself. Daenerys of the House Targaryen, the First of Her Name, The Unburnt, Queen of the Andals, the Rhoynar and the First Men, Queen of Meereen, Khaleesi of the Great Grass Sea, Protector of the Realm, Lady Regnant of the Seven Kingdoms, Breaker of Chains, and Mother of Dragons. Boom.

All in all, Miss Anokhi Paranjpe Temple is ready to slay this Halloween.