THIS Is the Best New Way to Glamp 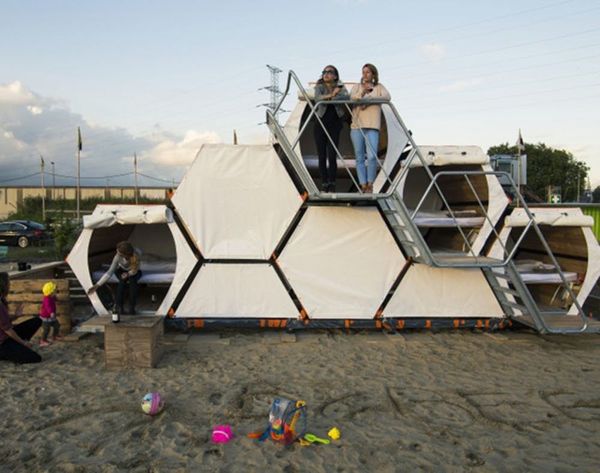 While Airbnb disrupted where we stay when traveling, the buzz this summer is about a new company — B-and-Bee — that’s set to disrupt the way we bunk up at festivals. The adorably named B-and-Bee is testing stackable sleep cells that offer an efficiently designed alternative to the acres of tents that usually sprawl across the grounds of music festivals and other multi-day events. The result is something like urban planning meets glamping.

B-and-Bee’s honeycomb hotels are made from hexagonal cells that are sturdy enough to be stacked with modular metal stairs leading to the upper levels. The sides of each cell are made from wood, which gives the interior a warm, cozy feel. The front is covered with waterproof material that rolls up for better ventilation and closes like a tent flap for privacy. Stretching from one side of the cell to the other is a king-size bed that can be folded into a futon-style sofa. Each cell also includes a locker, a light and all-important power outlets to keep your phone charged.

The concept was first drawn up by Belgian designers Compaan and Labeur. It won a creative competition in Antwerp last year and support for further development. After initial prototyping, the first big test run happened recently during the Ghent Festivities 2014, a free annual cultural festival in Belgium. Guests of all ages (and, apparently, a llama) stayed in the six test cells and provided feedback on the experience. B-and-Bee will use this to make sleeping cells available to festival-goers on a larger scale in 2015.

Rather than having to drag along and set up your tent and sleeping bag, the B-and-Bee sites would most likely serve as mini hotels, where you could reserve a room ahead of time. According to the B-and-Bee blog, a quarter of the tents at one festival last year were simply left behind. Add in abandoned tents from festivals around the world each year (plus a few that accidentally blow away across the playa at Burning Man), and you have tons of waste. B-and-Bee’s sleeping cells offer a more solid, sustainable alternative that doesn’t depend on festival-goers for removal.

We could totally see this as a great, no-hassle way to experience a music festival. It would be super fun to rent out cells next to a bunch of friends, especially if the festival lineup included Bee-yoncé. Or Honeyhoney. Or The Hives. Or Sting. Okay, we’ll stop now. The point is we’re already looking forward to festival season 2015!

What do you think about sleeping in a honeycomb hotel? Let us know in the comments below!

Stephanie Liebold
Stephanie Liebold is into storytelling, making things (better), and helping others share their message. She is Creative Director for Bold Avenue and writes about traveling, crafting, and making the most of the view where you are on her site, Travelcraft Journal.
Camping
Party
Camping Design