10 Lesser-Known Music Festivals You’ve Got to Check Out 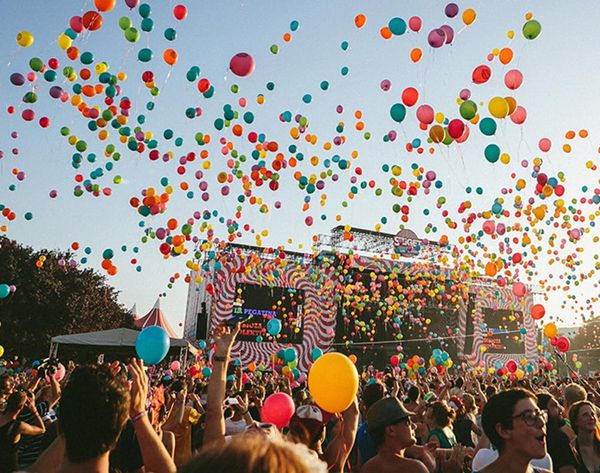 We can’t get enough of festival fashion this year! All the feathers, florals and fringe — what’s not to love? But why does the party have to end up at Bonnaroo? There are plenty more festivals where that came from. Escape with us beyond Coachella, Stagecoach and Bonnaroo to 10 music festivals you may not have heard of. Some of them are off the beaten path, but trust us, they’re worth the trip.

1. Hangout Music Festival: When you think Alabama, you may not think beachfront concert awesomeness, but that’s about to change. Only five years in, this May festival featured an incredible lineup: The Black Keys, Tegan and Sara and Capital Cities were just a few. Why haven’t we heard of this? We’ll definitely catch you next year, Hangout.

2. Moab Music Festival: Walls of sandstone in Moab, Utah make a natural amphitheater, and this festival lets you sit front-row for the show. With the outdoorsiness of a big festival and the intimacy of a parlor performance, expect chamber music, jazz and traditional music from around the globe. Shoes optional.

3. Forecastle: Louisville is home to more than the Kentucky Derby. This city is big on its bourbon and its music scene. The festival lineup has a variety of genres with artists like Outkast, St. Lucia and Jack White. There’s even an entire Bourbon Lodge with fireside chats focused around Kentucky’s iconic whiskey, plus a bourbon challenge and celebrity bartenders.

4. Mysteryland: This roving electronic music and arts festival claims to be one of the world’s largest, but has only previously taken place in the Netherlands and Chile — until this year! The U.S. premiere took over Bethel Woods Center for the Arts, New York this May. Artists like Nicky Romero and Don Diablo played on the same grounds that once held Wooodstock. We can’t wait for 2015. (image via Your EDM)

5. The Festival Internacional de Benicassim: Got your passport ready? Benicassim in coastal Spain is the place to be in July. There are some indie newbies and classics. Think Lily Allen, Jake Bugg, Ellie Goulding and Paoo Nutini. Sounds like the kind of music you can’t help but groove along with. (image via Guidepost)

6. New Orleans Jazz and Heritage Festival: If you haven’t checked out this festival, you have a whole year to plan your trip for 2015. The festival takes place at the end of April, and brings tons of acts to the already amazing plethora of rich culture New Orleans has to offer. This year, crowds heard from the likes of Eric Clapton, Christina Aguilera and Foster the People. So get yourself some beignets and crawfish, and we’ll meet you in the Big Easy! (image via Pure Volume)

7. Sziget Festival: If you’ve needed an excuse to rendezvous in Budapest, we’ve found it. Sziget takes place the second week of August and brings music lovers from all around the world. With acts like Macklemore and Ryan Lewis, Skrillex and Calvin Harris, who can blame them? (image via Exprnce)

8. Mawazine – Rhythms of the World: Let’s go global. This festival has acts from all over the world with a couple faves you’ll recognize. We’re talking Justin Timberlake and Alicia Keys. You’ll be jamming out in Maghreb, Morocco at a festival that came from humble beginnings and now hosts international talent. Check it out next summer! (image via CT 24)

9. Mad Decent Block Party: Get hip to this Philly hip-hop festival in August. Chance the Rapper, Sleigh Bells and Diplo will be on Festival Pier getting the party going, and looking at last year’s event, it seems like this is a crazy party. Get your mosh pit gear ready! (image via TBA)

10. Southern Ground Music and Food Festival: This may just be the Southerner in us, but y’all, this sounds like a great time. Charleston, South Carolina is such a beautiful host city for this kind of lineup. The tunes range from Jazz to Folk with names like Blues Traveler and the Old 97s. And then… there’s Southern food. There’s little info on the site right now on what’s going to be offered, but we’re thinking Low Country Boil meets Southern comfort. Sign us up, ASAP. (image via Nashville Scene)

Are you going to any of these awesome festivals? Let us know in the comments!

Katelan Cunningham
Katelan is a tech junkie obsessing over all things startup and design. She has entirely way too many apps on her phone and is no stranger to binge-watching. She accidentally fell in love in Los Angeles and that’s where she currently lives, writes, tweets and grams.
Coachella
Party
Coachella
More From Party