Move Over Filled Cupcakes: Oreo’s Got a Brand New Flavor 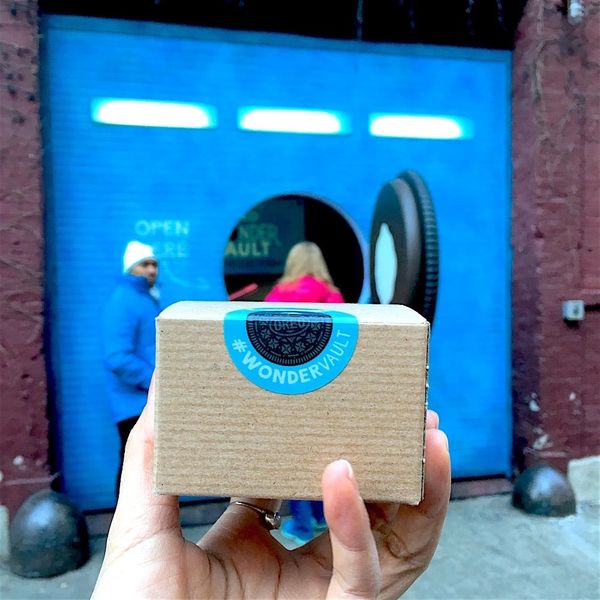 Today is a special day in New York City. No, it’s not a holiday, but, you know? It should be. There’s nothing that evokes childhood memories — or last week for some of us — quite like Oreos and a glass of milk, and it’s even better when you take a good thing and make it even better (like cinnamon bun Oreos!). Today, milk’s favorite cookie debuted their brand new, special flavor via something they called the Wonder Vault, and we got to check it out first hand.

All day today, the Wonder Vault is dishing out boxes Oreo’s new limited edition Filled Cupcake Oreos. The vault is located on an unassuming street in the Chelsea neighborhood of Manhattan, but a clear indication that something awesome is going down is the line that goes almost all the way down the block (and yes, we stood in that line just for you).

When you open the massive Oreo-shaped door, you find a scene that looks like something out of a Dr. Seuss book: a conveyer belt, a big red lever and a banner that welcomes you. You pull on the big red lever and music begins to play, a cartoon of Oreos coming down a milky river starts rolling on the back screen and before you know it, a little box comes down the conveyor belt. Magical.

But let’s not forget the most important part: the cookie itself. We personally gave it a taste test for journalistic integrity of course. From the outside, it looks ordinary enough, save for the chocolate middle.

Like any good Oreo eater, we twisted it open first. Here you can check out that extra cupcake cream filling. And the verdict is… totally delicious. Nom nom nom. The extra pop of cream in the center definitely adds something special.

In case you’re not in NYC to experience the magic of the Wonder Vault in person, these tasty filled cupcake treats will be available nationwide starting February 8 for a limited time. Also, Oreo hints that the Wonder Vault “portal” might be making a tour around the U.S. You can use the hashtag #WonderVault to possibly lure it to your hometown.

Will you be checking out these Filled Cupcake Oreos? Tweet us @BritandCo!

Kimberly Wang
Kimberly Wang writes about all things pop culture, tech, style, and beauty. She's a Bay Area transplant and has an MFA in Creative Writing from Columbia University. On a sunny New York day, you can find her hanging out with her mini schnauzer Isabelle Jellybean on a blanket in Central Park.
Cookie Recipes
Food News
Cookie Recipes
The Conversation
More From Food News

The 9 Best Marinades and Sauces at Trader Joe’s

Do you ever want or need a break from booze, but don't want to miss out on the social setting that often surrounds happy hour? Maybe you're trying to stop drinking altogether and embrace dry July? Either way, letting go of alcohol doesn't mean you have to let go of cocktails. Still, we know what you're about to say … "mock-tails are too sugary and they just don't taste as good." Well, we're here to tell you otherwise, and we just might be onto something.